Adam Goodes, Australian of the Year: 'empowering and inspiring' 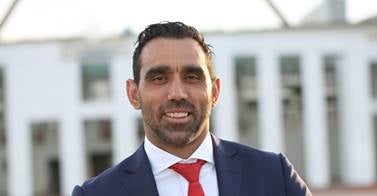 The Australian Human Rights Commission is "absolutely delighted" that its anti-racism ambassador, Adam Goodes (pictured), has been named Australian of the Year 2014.

"It's a fantastic achievement; we're absolutely delighted that Adam Goodes has been honoured as Australian of the Year," said the Commission President, Professor Gillian Triggs.

"The award acknowledges and celebrates the very significant contribution Adam Goodes has made to human rights in Australia.

Mr Goodes was honoured for his leadership and advocacy in the fight against racism both on the sporting field and within society - a stance which has won him the admiration and respect of people around Australia.

The 34-year-old Australian Rules football player and Andyamathanha man holds an elite place in AFL history, winning two Brownlow Medals and two premierships. He is a member of the Indigenous Team of the Century and has represented Australia in the International Rules Series.

Mr Goodes is also an ambassador for the Human Rights Commission's Racism, It Stops With Me campaign. He features in an anti-racism video clip produced by the Commission as a Community Service Announcement in partnership with Play by the Rules.

"Racism, It Stops With Me encourages people to think about what they say and to understand why racist comments are wrong," Professor Triggs said.

"We were lucky to find the perfect ambassador in Adam Goodes. We thank him for his leadership and and we congratulate him for his achievements."

Dr Soutphommasane said Mr Goodes has delivered a simple but important message: that there is no place for racism in Australia.

Watch the Racism, It Stops With Me video clip.