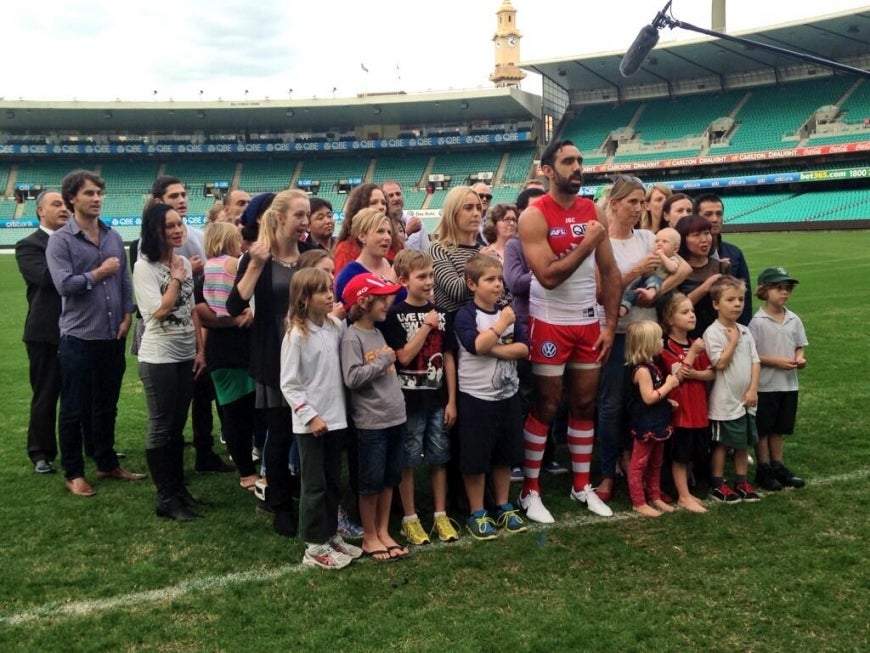 The timing was spot-on. As news broke yesterday that footballer Adam Goodes had again been racially abused during a weekend game, the Australian of the Year and AFL legend was placing hand on heart and declaring: “Racism. It Stops With Me”.

Mr Goodes and a colourful crew of supporters of all ages were at the SCG to shoot a Community Service Announcement (CSA) for the Australian Human Rights Commission’s anti-racism campaign.

The supporting talent included one cute baby; a very excited Under 10s Sydney Swans player and a handful of other kids; some mums and dads; representatives of Australia’s Jewish, Korean and Greek communities; multicultural leaders including Community Relations Commission chief executive, Hakan Harman; and plenty of other individuals who wanted to voice their support.

Race Discrimination Commissioner Tim Soutphommasane said the CSA will remind Australians that they can stand up to racism, wherever it happens.

“Our ambassador for the Racism. It Stops With Me campaign, Adam Goodes, communicates our message with a great deal of character and integrity.

“Adam has stood up to racism and spoken about it honestly. These are the qualities we want to promote in our conversations about racism. We want people to be comfortable about calling out racism when it happens, and to have honest conversations about it,” Dr Soutphommasane said.

Recent examples of racial vilification at sporting events and online are reminders of the enormous challenges that exist in combatting racism, Dr Soutphommasane said.

“We cannot be complacent,” he said.

“Racism hurts. It wounds its targets and makes people feel they are second class citizens. We have to keep reminding people that racism still occurs and we need to respond to it.”

The clip, previewed below, will be distributed to TV networks and sporting bodies later this month.