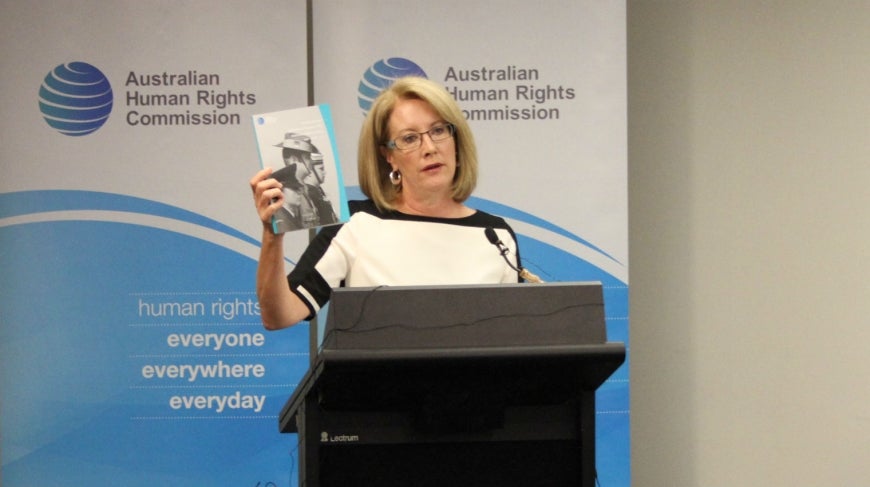 The Commission has released the fourth and final report of its Review into the Treatment of Women in the Australian Defence Force, the Audit Report which has found the ADF has made significant progress in a number of areas that will both improve gender diversity and enhance capability.

Commissioner Broderick, who is the head of the Review, said the report was the culmination of an audit of the ADF’s implementation of the 21 recommendations in the Commission’s original report. She said those recommendations were designed to assist the ADF to become a strong force into the future and a modern, first class employer with a first class reputation.

“Our original report found that increasing the representation of women and improving their pathways into leadership would improve the operational effectiveness of the ADF,” she said. “This would be achieved by addressing the problem of a shrinking talent pool, the significant cost of unwanted departures, the lack of diversity among leadership and the unacceptable behaviour sometimes faced by women.”

Commissioner Broderick said the Audit Report found the ADF has made significant progress:

Encouraging the ADF to “sustain the momentum for cultural reform and to fully realise the benefits of a proud, inclusive military where women and men can flourish”, she highlighted four main areas where this momentum could be improved.

“Firstly, I would urge the ADF to strengthen its efforts around holding Commanding Officers accountable for the healthy culture of their base or unit,” she said. “Leaders create the environment that determines whether their organisation has a positive or a negative culture, so unless leaders are held to account, the potential for all members to thrive will be undermined.”

Secondly, Commissioner Broderick said that more work needs to be done on reviewing job design and statements of duty to ensure the availability and possibility of flexible work arrangements, which, research shows, acts as a strong retention tool.

The third are for improvement involved the priority delivery of a robust sexual ethics program across Defence. Though she was pleased that the ADF has recently engaged an expert to help develop the program, she encouraged its roll out as soon as possible.

Fourthly and finally, though Commissioner Broderick acknowledged that cultural change took time, she said the ADF needed to better recognize that it was often challenging for people in an organisation to accept the reforms taking place.

“In the ADF, this means proactively communicating the organisational benefits of cultural changes throughout the organisation and being constantly alert to any backlash against women as a result of these reforms.”

Noting her pride at the achievements of Review, and the dedication of her team members, she said it’s four reports represented one of the most comprehensive and detailed examinations of gender in any military in the world.

Commissioner Broderick said she was “therefore, delighted that the Australian Human Rights Commission will continue to support the ADF in embedding broad cultural reform in the organisation over the next four years”.

The Audit Report is available at defencereview.humanrights.gov.au