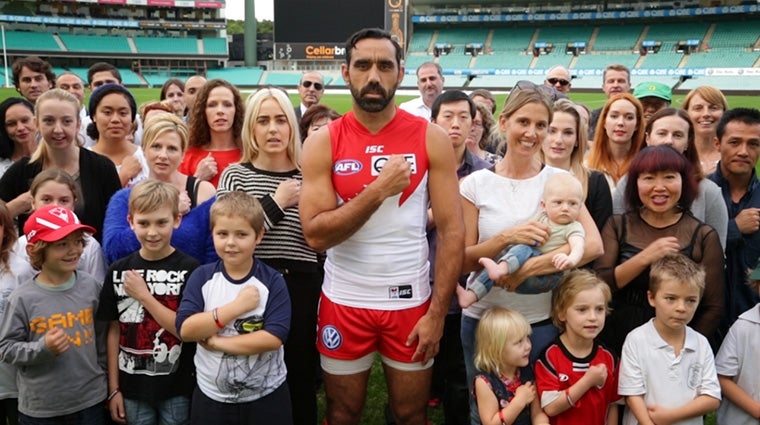 Following the weekend’s events when prominent Aboriginal AFL player and former Australian of the Year, Adam Goodes was booed at every turn during the Swans v West Coast Eagles AFL match.

Today in advance of the weekend round of AFL, 150 organisations (listed overleaf) join together to call for renewed efforts to stamp out racism in sport and everyday life.

For too long, we have witnessed the poor treatment of Sydney Swans star and dual Brownlow medallist Adam Goodes at the hands of fans during AFL matches. A proud Ambassador of the “Racism. It Stops with Me” Campaign, Goodes is a strong advocate for standing up against racism and for issues affecting Aboriginal and Torres Strait Islander peoples.

The booing, which has snowballed out of control this year since Goodes proudly displayed his culture during the AFL Indigenous Round, appears to be in large part racially motivated.

Adam Goodes is an outstanding Australian and should be commended for displaying a culture all Australians should celebrate and be proud of, and for taking a courageous stance against racism. The behaviour of the crowd that booed him is absolutely unacceptable and must stop.

To dismiss claims of racism as just banter is to use football as a shield for prejudice. Legitimate barracking for one’s team is a tradition that has been alive as long as the game itself but, when such behaviour coincides with cultural displays and Goodes’ efforts to stop racism, it is clear that a line has been crossed to racial abuse.

To suggest that this kind of behaviour does not have an effect is to deny the evidence about the known health impacts of racism. These are not diminished simply because the person being subjected to racial abuse is an elite athlete. It is deeply disturbing that this kind of racism may influence whether a player decides to take the field for one match or is forced out of the game for good.

If this isn’t stamped out, then we must ask what message this sends to future generations of Australians about the forms of behaviour that we find acceptable in this country. And what message does it send to young Aboriginal and Torres Strait Islander people about their culture, and what they can expect should they want to excel in sport or other fields.

It is a great stain on our nation that the experience of Adam Goodes is the lived experience of many Aboriginal and Torres Strait Islander people, and there is ample evidence that demonstrates the negative impact on mental and physical health, as well as life opportunities.

Racism has no place in Australian sport or our society at large. We commend the actions that have been taken inside and out of the AFL, but call on all sports and sporting clubs to develop coherent and far reaching strategies in partnership with Aboriginal and Torres Strait islander people to stamp out racism in sport.

As a starting point, codes and clubs should encourage members and supporters to join the ‘Racism: It Stops with Me’ campaign at https://itstopswithme.humanrights.gov.au

Australia must and can be better than this.

This statement is supported by the following organisations: