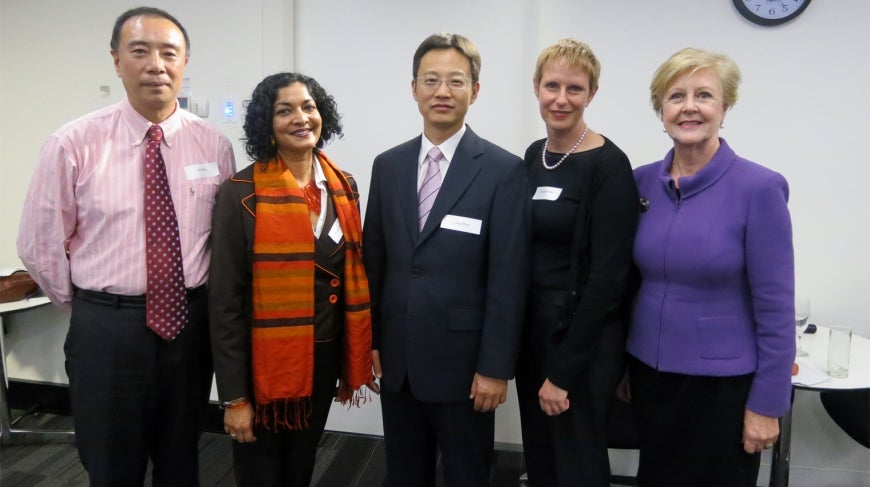 The 15th anniversary of the China-Australia Human Rights Technical Cooperation Program was celebrated by the Commission on 24 June 2014 with a Reception that brought together previous Australian participants for the first time.

The Reception was hosted by Commission President, Professor Gillian Triggs and included special guests from the Chinese Ministry of Foreign Affairs, which coordinates the Program in China. The Chinese delegation was led by Counsellor Long Zhou, from the Department of International Organisations and Conferences.

“China and Australia share over 40 years of diplomatic relations, and it is very significant that for 15 of those years we have successfully engaged in a bilateral human rights dialogue and of course the resulting Human Rights Technical Cooperation Program which we celebrate this evening," Professor Triggs said. “There is much we have achieved together, working in a spirit of equality and mutual respect. And we have much that we can be proud of.”

Dr Rachael Field from the Queensland University of Technology Law School, who took part in the Program in 2011-12, spoke about her experiences of working with Chinese participants on issues including family dispute resolution and women’s rights.  She said that she has greatly valued the opportunity to work with Chinese counterparts who share similar problems and challenges.

The Human Rights Technical Cooperation Program began in 1998, the year after the first Human Rights Dialogue between China and Australia. During the past 15 years, over 35 different human rights issues have been examined through over 220 activities in China and Australia. The Program is funded by the Australian Department of Foreign Affairs and Trade, implemented by the Australian Human Rights Commission and coordinated in China by the Department of International Organizations and Conferences of the Chinese Ministry of Foreign Affairs.