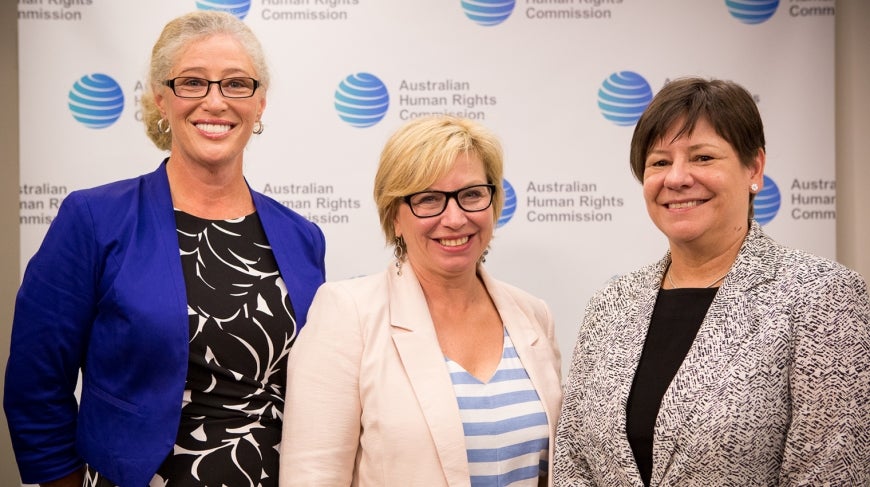 The Minister for Women, Senator Michaelia Cash, sent a message of support via video.

Commissioner Mitchell said the report includes new data which reveals the prevalence and impact of violence inflicted on children and young people by family members.

The Commissioner also paid tribute to Rosie Batty’s impact on our awareness of domestic violence.

“We ended 2014, and began this year, with an unprecedented national conversation and I hope, commitment, to end family and domestic violence,” Commissioner Mitchell said.

“This did not arise from government reports or political leadership, it arose from the most deeply tragic of circumstances.

“Luke’s mother, Rosie, found the strength to rise above her personal tragedy to speak out about the scourge of family and domestic violence.

“Rosie captured the nation’s attention with her bravery. As a result we have seen an explosion of news reporting about family and domestic violence, whereas before there was relative silence.

“In recent months, all too often there has been front page news around the country about a terrible sequence of deaths of mothers and their children.

“Because of Rosie Batty, and the courage of other adults and children who have spoken out, we can no longer ignore this issue.”

“Available Victims of Crime data for some jurisdictions further indicates that for the four year period to 2013, there were over 14000 physical assaults and over 12000 sexual assaults of children perpetrated by parents or other family members - mostly directed at younger children under nine years of age.

“For me these are shocking statistics that show just how many children are direct victims of violence in the home,” Commissioner Mitchell said.

“Previous studies have also estimated that over 20% of children and young people have witnessed violence against a mother or step mother.”

Commissioner Mitchell said the availability of information about children's exposure to domestic violence is extremely poor and in urgent need of remedy.

“Currently, nationally disaggregated data about children affected by family and domestic violence is not readily available, there is limited breakdown on the age or characteristics of child victims, limited data about offenders and perpetrators, and inconsistent use of terminology and recording of data.

“So my first tranche of recommendations go to the need to undertake research and collect basic data about children's unique experiences of family and domestic violence.

“We must be able to identify those children affected by family violence, to understand its nature, scope and frequency and to inform the targeting of interventions. By not paying adequate attention to this blight on our society, we will continue to either ignore or minimise it.

“Second, there is a clear need for early intervention, from a child's conception, especially in the early years of a child's life. In particular, we have called for routine screening and better information on family and domestic violence during pregnancy.

“Research is now clear that exposure to family violence can have significant negative impacts on the developmental trajectory of children, including in utero, and has been directly linked to mood and personality disorders, impaired cognitive functioning and learning, antisocial and aggressive behaviours, heightened anxiety and pervasive fear.

“These traumatic impacts are increasingly being recognised in children whether they are direct victims of family and domestic violence or bystanders to it.”

Commissioner Mitchell said the experiences of children must be understood in their own right, and not just as part of an adult situation.

“We know that family and domestic violence is widespread and predominantly associated with violence against women, but its impact on children is variable, poorly documented and not well understood.

“We need to generate evidence to fill the gaps in our knowledge, and we need to translate what evidence we do have into action.

“If ending violence is our priority - and it must be - we need a seismic shift in cultural attitudes - one that recognises every child, every woman, every person as the holders of inalienable, universal rights to freedom from violence in all its forms. We must do all we can to remove violence from the lives of our children.”