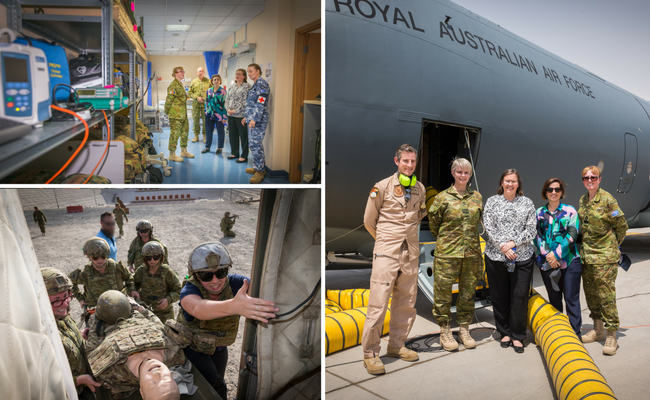 Sex Discrimination Commissioner Kate Jenkins has released a report outlining some of the insights she gained from her recent visit to the Middle East region with the Australian Defence Forces (ADF).

Commissioner Jenkins was invited to the Middle East region by Chief of the Defence Force Air Chief Marshal Mark Binskin AC so that she could learn more about the ADF’s operations and goals in the region. This visit builds on the long-term collaboration between the ADF and the Australian Human Rights Commission to embed cultural reform across the three services: Navy, Army and Air Force.

“I am very grateful to Air Chief Marshal Binskin and all those ADF personnel who accompanied me on this trip or shared their personal stories and experiences with me,” said Commissioner Jenkins.

“From formal meetings to conversations over a meal in the mess, I now have a vivid picture of the rewards and challenges of deployment and the extraordinary resilience and professionalism of our ADF personnel.”

The report shares insights and observations from high impact meetings, workshops, site tours and briefings at Australia’s main operating and logistics bases in the region, as well as one-on-one conversations with ADF personnel. Through these more informal conversations, Commissioner Jenkins was able to gain personal insights into the experiences of the more than 1700 ADF personnel deployed on operations in the Middle East region.

“Although many ADF personnel described deployment as a career highlight, a number of people told me that one of the major challenges of life deployment was being away from family, friends and home,” said Commissioner Jenkins.

“This was particularly challenging for mothers who face social expectations that they should remain at home with their children.”

Although women represent less than 10% of the deployed community, Commissioner Jenkins observed a range of practical examples of how diversity can improve ADF operations and increase capability.

“Female mentors and advisors in Afghanistan are making a critical contribution to strengthening the capacity of the Afghan Defence and Security Forces,” she said.

“They are able to work directly with their female mentees, in a way that would be inappropriate for male officers. Female mentees and advisors also serve as agents for change by showing the Afghan Defence and Security Forces the positive contribution that female officers can make and the respect they command.”

“This is a powerful demonstration of the value and impact of gender diversity for organisations and individuals.”

Conversations on deployment is available at https://www.humanrights.gov.au/our-work/sex-discrimination/publications/conversations-deployment.