Finalists revealed – Racism. It Stops With Me Award 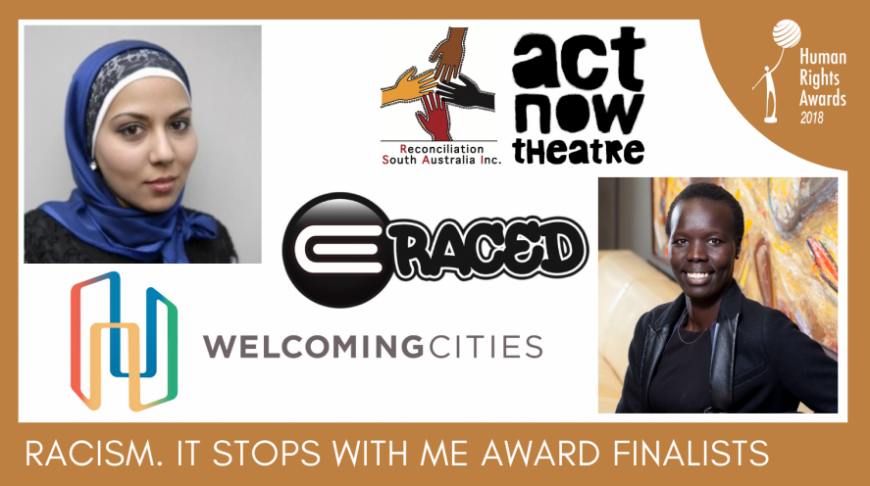 Once again we have an impressive line-up of finalists for the 2018 ‘Racism. It Stops With Me’ trophy.

This Human Rights Awards category, now in its fourth year, has attracted more than 100 nominees since conception. It is a unique opportunity to recognise outstanding Australians who have worked tirelessly to reduce or prevent racism around the country.

Mariam Veiszadeh
As an Afghan-born lawyer and equality campaigner, Mariam has spent the last decade defending the rights of those subjected to racism and bigotry. Her work has earnt her several awards and 2014, she established the Islamophobia Register that tracks anti-Muslim incidents in Australia. Mariam endured months of cyber-bullying for her work which attracted international attention and support, which lead the social media movement, #IstandwithMariam.

Welcoming Cities
This initiative promotes and supports local councils and communities around the country to become more welcoming, tolerant and inclusive.  It developed an Australian Standard that provides indicators and criteria for member councils to meet to support their welcoming work.  The network currently includes 23 local councils and a growing number of community organisations, businesses and other government agencies.

Nyadol Nyuon
Nyadol Nyuon is a strong and effective advocate on behalf of the African-Australian community. Nyadol has been prominent in media debates around race and on a range of human rights issues. Most recently this has included responding to a wave of negative stereotyping and mis-representation of Melbourne’s South Sudanese community.

E-Raced aims to erase racism, one story at a time. Since 2015, E-Raced has been providing school students in Queensland’s Darling Downs region with the opportunity to meet refugees and migrants and hear their life stories and experiences, in a bid to erase discrimination and reduce cultural stereotypes and improve harmony and acceptance.

ActNow Theatre and Reconciliation SA
Since 2014, Reconciliation South Australia and ActNow Theatre have been delivering an interactive theatre-based program to school students that helps them to develop strategies to tackle racism towards Indigenous Australians, migrants and refugees.  More than 1,800 students and 250 teachers from 172 schools have participated.  The program hopes to expand the program nationally.

The 2018 'Racism. It Stops With Me' award is proudly sponsored by the Delegation of the European Union to Australia.

Tickets for the Awards are on sale now! https://hrawards.humanrights.gov.au/tickets