The Forgotten Children – 1 year on 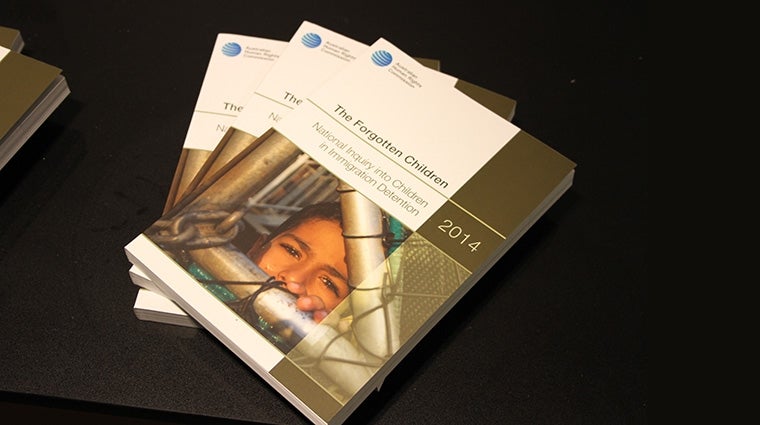 It’s been a year since the Commission’s National Inquiry into Children in Immigration Detention 2014 produced its findings and recommendations in The Forgotten Children report.

The report revealed that the prolonged, mandatory detention of asylum seeker children causes them significant mental and physical illness and developmental delays.

The Commission called for all children held in immigration detention in Australia and Nauru to be released into the Australian community. Around the time the Inquiry was announced there were 1,006 children in detention facilities in Australia, and 132 children in detention in Nauru. Since then, the Minister for Immigration and Border Protection has used his personal discretion under the Migration Act 1958 (Cth) to release several hundred children and their family members from immigration detention facilities by placing them in community detention or granting them bridging visas.

Aside from the release of the majority of children from immigration detention in Australia, there have been other positive developments since the Inquiry.

In September 2015 the Government introduced the Migration and Maritime Powers Amendment Bill (No. 1) 2015 (Cth). The Bill was passed by the House of Representatives, but before the Senate passed the Bill it made amendments relating to the detention of children in closed facilities. One of the key provisions inserted by the Senate would require the Minister to move children out of closed immigration detention facilities and into community detention arrangements within 30 days of those children being identified as minors. Although there would be some exceptions to this general rule, these amendments to the Migration Act, if passed by the House of Representatives, will represent a significant change in the law, for the benefit of children subjected to Australia’s system of mandatory detention.

These reports were confirmed by Philip Moss, who conducted an independent review into allegations relating to conditions and circumstances at the RPC in Nauru. The Moss Review found that there were both reported and unreported allegations of sexual and other physical assault of children detained in the RPC. The Review also reported that between October 2013 and October 2014, 17 children in the RPC engaged in self-harm, the youngest of whom was 11 years old.

The Government accepted all of the findings of the Moss Review and stated that it would adopt all of the Review’s recommendations. These recommendations included that the Department of Immigration and Border Protection (the Department) and the Nauruan Government improve the policy framework for preventing and responding to incidents of sexual and other physical assault at the RPC, and work to ensure that a robust child protection framework was developed.

Following the Moss Review, the Government established a Child Protection Panel to provide independent advice to the Department on child protection in immigration detention and regional processing centres. The Panel will make recommendations to strengthen arrangements around the management, response, and reporting of incidents involving children.

On 26 March 2015, the Senate established the Select Committee on the Recent Allegations relating to Conditions and Circumstances at the Regional Processing Centre in Nauru. The Committee received 101 submissions, and conducted four public hearings, including with the Department and key service providers for the RPC in Nauru. In its final report, released on 31 August 2015, the Committee concluded that ‘the RPC in Nauru is neither a safe nor an appropriate environment for children and that they should no longer be held there.’  The Committee recommended that the Government remove all children and their families from the RPC in Nauru as soon as possible.

The Select Committee also expressed concerns about the level of accountability and transparency that applied to the operation of the RPC in Nauru. In order to maintain scrutiny of what was happening in the RPC, the Committee’s last recommendation was that the Senate Legal and Constitutional Affairs Committee subsequently conduct an inquiry into the conditions and treatment of asylum seekers in the RPC. On 12 October 2015 the Senate Legal and Constitutional Affairs Committee was referred an inquiry on the terms suggested by the Select Committee (and the terms were extended to apply to the Regional Processing Centre on Manus Island in Papua New Guinea). The Committee is currently accepting submissions and is due to report on 31 December 2016.

On 5 October 2015 the Government of Nauru announced that the RPC would become an ‘open centre’ 24 hours a day, allowing asylum seekers to leave the centre any time they wished. The Commission raised concerns that this measure in and of itself would not solve the problems of the harsh conditions faced by asylum seekers and refugees sent to Nauru, including the risks to their safety detailed in the Moss Review and by the Senate Select Committee.

The Commission continues to work closely with the Department to monitor the conditions of detention and the release of children from detention. In October 2015 the Commission conducted a follow-up visit to the immigration detention facility at Wickham Point in Darwin, accompanied by two consultant paediatricians. The doctors interviewed and assessed the children using internationally recognised tools appropriate for their ages. Following the visit the Commission sent a letter to the Secretary of the Department outlining its concerns and recommendations. The President of the Commission also met with the Secretary of the Department to discuss these concerns and recommendations in early December.

On 4 February 2016, the Commission released the paediatricians’ report of the visit to Wickham Point. The report outlined concerning evidence about the mental and physical health of the children detained at Wickham Point, most of whom had spent months in Nauru. The paediatricians reported that these children were amongst the most traumatised they had ever seen and recommended that under no circumstances should any child detained on the mainland be sent to Nauru.

In the wake of the High Court’s decision in Plaintiff M68/2015 v Minister for Immigration and Border Protection, many of the children detained at Wickham Point (including some who were born in Australia) are due to be transferred to the RPC in Nauru. The Commission is concerned that moving the children and their families to Nauru could place Australia at risk of breaching its international obligations to ensure people are not subject to cruel, inhuman or degrading treatment.

The Commission welcomes the release of several hundred children from immigration detention facilities; the removal of all children from Christmas Island; the establishment of a Child Protection Panel; and the scrutiny of the consequences of Australia’s policies of third country processing and mandatory immigration detention by the Moss Review, the Senate Select Committee, the Senate Legal and Constitutional Affairs Committee, and the Royal Commission.

However, the Commission calls on the Government to immediately act to remove the 174 children still in immigration detention in Australia and Nauru. The Forgotten Children report demonstrated that these children are at risk of significant harm the longer they remain in detention. The Commission also urges the Government not to return any child in Australia to Nauru, given the risk of harm to these children and their need for ongoing medical care.