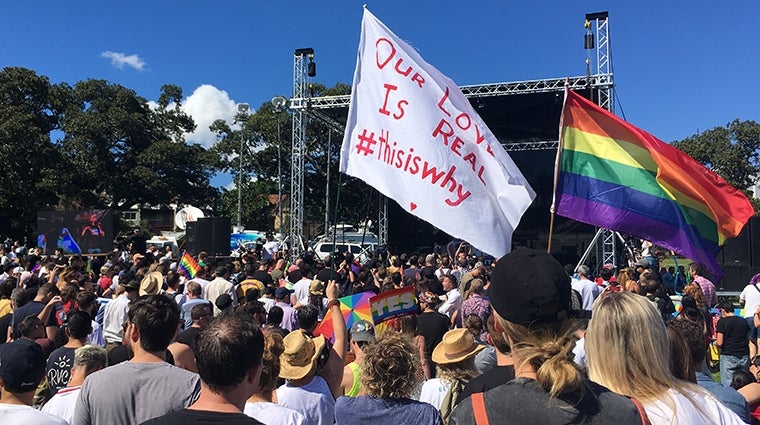 Following the completion of the Federal Government postal survey on marriage reform, the Australian Human Rights Commission calls on Parliament to amend the Marriage Act so that civil marriage is available to all couples, regardless of sex, sexual orientation, gender identity or intersex status.

“This is an important step forward for the equality of LGBTI Australians,” said Human Rights Commissioner, Edward Santow.

On 15 November 2017, it was announced that a majority of participants in the postal survey support marriage equality.

The Government’s voluntary survey asked one question: "Should the law be changed to allow same-sex couples to marry?"

“The survey result clears the way for our federal Parliament to amend the Marriage Act in a way that respects the rights and freedoms of all Australians, including religious freedom,” said Commissioner Santow.

“This reform will be about civil marriage law only. The Commission supports the Government in ensuring that religious organisations can continue to solemnise marriages in accordance with their doctrines, tenets and beliefs,” said Commission President, Professor Rosalind Croucher.

Commissioner Santow said a blueprint for constructive legislative reform, which respects the rights of all Australians, is set out in the cross-party consensus report produced in February 2017 in response to the Government’s exposure draft bill on marriage reform.

“This cross-party report considered the rights and freedoms of all Australians. It provides a strong foundation for future legislation,” Commissioner Santow said.

“The Commission will continue to offer advice on how to amend the legal definition of civil marriage while maintaining existing religious freedom protections.”

The Australian Human Rights Commission considers that the fundamental human rights principle of equality means that civil marriage should be available, without discrimination, to all couples, regardless of sex, sexual orientation, gender identity or intersex status  More here.