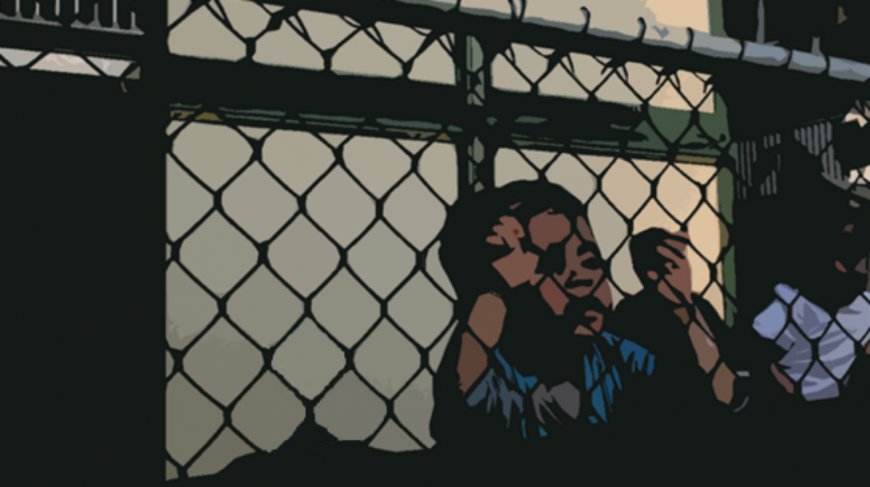 We are talking about children living behind the wire and steel fences of closed detention facilities in our own country. Day-in, day-out, these children live with boredom and isolation. They have no freedom of movement. They are not free to visit the local park or playground. They can’t go to the beach for a swim. They can’t visit a museum or library. They can’t go to the movies. Even worse, on top of all this, many of them have limited access to education.

The Commission’s 2004 Report found that the mandatory immigration detention of children was fundamentally inconsistent with Australia’s international human rights obligations and that detention for long periods created a high risk of serious mental harm.

Since that time, there have been significant improvements in government policy through the use of community detention and bridging visas. However, despite the adoption of relatively more humane alternatives to detention, unprecedented numbers of children remain in closed detention. In light of the significant body of medical evidence highlighting the detrimental health impacts of mandatory detention, the continued detention of these children is extremely concerning.

Over what has now become a long period of time during which Australia has employed these mandatory detention policies, we have seen that about 90 percent of the asylum-seekers who arrive here by boat are found to be refugees. These people have therefore been able to settle in the Australian community. Yet, upon release, the unfortunate reality is that the children who have been held in mandatory detention will not have been afforded the same life chances as other children in our community.

With this increase in numbers of children detained - and now subject to transfer to Nauru and Manus Island, it is time to reassess.

On that basis, today I have announced a second national inquiry by the Australian Human Rights Commission into the mandatory and closed detention of children seeking asylum in Australia.

Our over-arching objective is to assess the impact of immigration detention on the health, well-being and development of these children.

The Australian Government most certainly has a right to check the health and identity of all people seeking asylum, as well as to run security checks on them. But in doing so, how we can justify detention of these people for months - or even years.

According to the United Nations Convention on the Rights of the Child 1989, the best interests of the child must be a primary consideration in “all actions regarding children”. It also states that a child may be detained “only as a measure of last resort and for the shortest appropriate period of time”. This is an international human rights convention to which Australia is a signatory – and these basic tenets should never be far from our dealings on this issue.

Apart from the freedoms and opportunities that children in detention may be deprived of, the environment itself is of great concern to me. Consider the reports of self-harm and mental distress we hear of in immigration detention. In May 2013, the Commonwealth Ombudsman reported that, between January 2011 and February 2012 there were 4,313 incidents of self-harm in Australian detention facilities. How does this affect the children that are exposed to this anguish and these stressful conditions? Then consider that, between 1 January 2013 and 14 August 2013 in Pontville Alternative Place of Detention, there were reports of 50 incidents of actual self-harm and 49 incidents of threatened self-harm - by unaccompanied, detained children.

These children are not able to tell their stories, but the people around them can. The submissions – the information – we receive in our Inquiry is therefore critical. It is vital that we hear from as many people as possible. The vast majority of the children detained 10 years ago will now be adults, settled in Australia as recognized refugees and citizens of this country. Many people will have had direct experience with them and gotten to know them as professionals providing health and other services, as carers for refugee children at various times, as neighbours, friends, teachers, work colleagues, and in any number of other community capacities. We will be interested to learn from them about the impact of detention and, hopefully, to hear that they are now flourishing in their new lives. Very importantly, we want to hear from the detainees themselves.

These children who are living and have lived in immigration detention need to be given a voice. Their stories need to be told. Their rights need to be addressed. We need to understand the long-term effects on children of living in such circumstances. And we need to encourage government to respond, once again, with humanity. It is my hope that the eventual findings of this new Inquiry will achieve this outcome.

You can find more information about the Inquiry, as well as submission forms, at www.humanrights.gov.au/national-inquiry-children-immigration-detention-2014

Published in The Hoopla as ‘Kids in detention: New inquiry’ (http://thehoopla.com.au/kids-detention-new-enquiry/ )