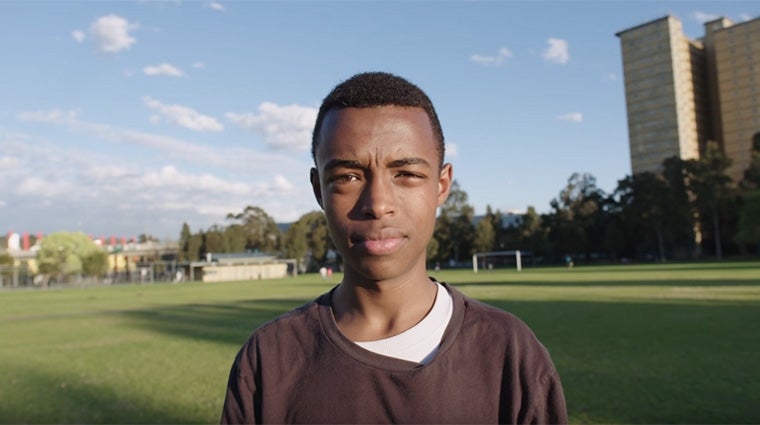 Majak Daw and Jamie Macmillan from the North Melbourne Football Club have helped launch Be Brave, Speak Up, a youth-led campaign to encourage young people to take a stand against racism.

A small group of young people from the not-for-profit youth group, The Huddle, took the opportunity to create a campaign they felt strongly about. Racism was the subject they wanted to discuss.

The centrepiece of the campaign is a short video the young people made. It features their peers talking about the impact of racism, and includes comments from Kangaroos players Majak Daw, Jamie Macmillan and Emma Kearney, as well as Melbourne United's Chris Goulding, New Zealand Breakers’ Majok Majok, and Western Sydney Wanderers’ Ruon Tongyik.

The North Melbourne Football Club will broadcast the video at home games for the remainder of the 2018 season.

North defender Jamie Macmillan said he had no hesitation being part of the short video.

"The message here is quite simple; if you see something untoward or inappropriate, don't just be a bystander, be brave and speak up. What these young kids have done here is far braver than anything I've seen on the football field."

Race Discrimination Commissioner Dr Tim Soutphommasane spoke at the launch, commending the young campaigners for encouraging people to speak up against racism.

“Be Brave, Speak Up empowers people to start conversations about racism with their family and friends and classmates.

“I congratulate the inspiring young people who made this video. It shows us how powerful it is when people come together to speak out about racism with one voice,” Dr Soutphommasane said.

Be Brave, Speak Up follows on from the Australian Human Rights Commission’s Racism. It Stops With Me campaign, which features prominent athletes as ambassadors for the prevention of race-based discrimination.