This must be a wake-up call: Commissioner Gooda 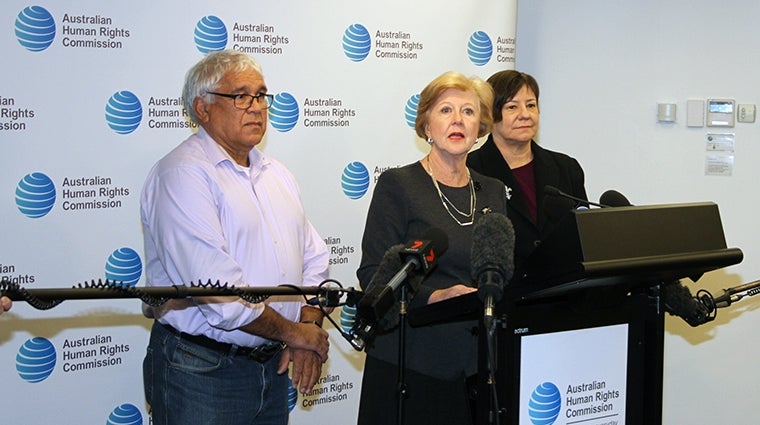 “This must be a wake-up call to everyone in Australia. Something has to be done about the way we lock up people in this country, especially our kids.

“What we saw last night is an absolute disgrace. What we saw this morning was decisive leadership from a Prime Minister who cares. What we’ve got to do now is make sure this makes a difference.”

“We have three times as many Aboriginal people in custody now as we did 25 years ago when we had the Royal Commission in Aboriginal Deaths in Custody,” Commissioner Gooda said today at a media conference at the Australian Human Rights Commission (AHRC).

“But I hope that something positive can come out of this. This is an opportunity for the Government and the Opposition to stand up and say enough is enough. And it is time to start listening to us. If you don’t, this will keep happening.”

Commission President Gillian Triggs told reporters she welcomed the Prime Minister’s establishment of a Royal Commission, saying the first and most urgent priority is to address the conditions, conduct and culture at the Don Dale Juvenile Detention Centre.

“We have seen genuine leadership in moving very quickly on a matter that concerns most Australians. We stand ready at the AHRC to assist with this Royal Commission in any way that we possibly can,” Professor Triggs said.

“For many years, the Commission and others have been reporting on the appalling conditions in Australia’s youth detention centres and the disproportionately high rates of Indigenous incarceration. We must now come to terms with a failure to address a problem that we all understood has existed for a long time.”

National Children’s Commissioner Megan Mitchell, who recently visited Don Dale and several other youth detention centres, said she too was deeply shocked and moved by the CCTV footage aired by Four Corners.

“It is unbelievable to think these things are happening in Australia today. The conditions at Don Dale are extremely poor. It is not a suitable place for children. There is a pervasive sense of violence and there is routine use of force and isolation.

“I too welcome this inquiry but I also ask that the NT government look quickly at whether this facility should continue.”.