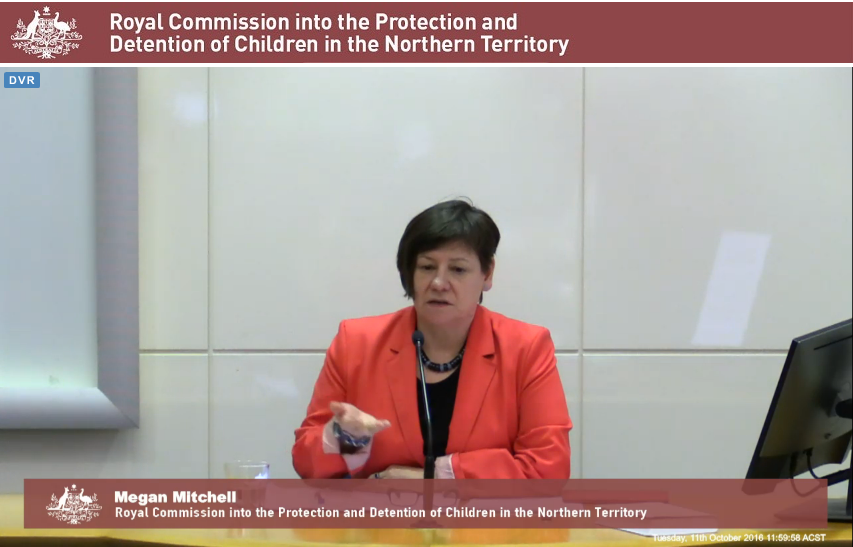 National Children’s Commissioner Megan Mitchell has appeared before the Royal Commission into the Protection and Detention of Children in the Northern Territory as its first witness.

During her appearance, Commissioner Mitchell called for a major overhaul in youth detention across the country, highlighting the obligations that Australia has under a range of international treaties prohibiting the use of force, restraints, strip searches and isolation on children in detention.

Commissioner Mitchell also told the Royal Commission about her experience visiting the Don Dale Youth Detention Centre to talk with children and young people about their rights and responsibilities in detention.

“I have to say that in comparison to other youth justice facilities across Australia, Don Dale is coming from a particularly low starting point. The legislative framework for protecting detained children in the Northern Territory raises concerns, in particular the recent legislative amendments expanding the use of mechanical and other restraint devices.

“We need appropriate oversight and accountability mechanisms to ensure that children are protected in youth detention settings, and to prevent abuses from occurring in future.”

Australia has ratified seven major human rights treaties which set human rights standards for the treatment of children in youth detention. In particular, the Convention on the Rights of the Child emphasises that children should only be kept in detention as a last resort and for the shortest appropriate period of time.

However, Commissioner Mitchell noted that there are limited legislative protections for children in youth detention at the national level.

“As youth justice is a state and territory responsibility there are no national laws that protect children’s human rights in this context,” explained Commissioner Mitchell.

“This creates an unfortunate situation where Australia has binding obligations under international law but there are not always domestic legal obligations or avenues for children to access a remedy if their rights are breached.”

Commissioner Mitchell stated that when Australia ratifies the Optional Protocol to the Convention Against Torture and other Cruel, Inhuman and Degrading Treatment or Punishment (OPCAT), most jurisdictions, including the Northern Territory, will need to change some of their current monitoring arrangements. Further information on the OPCAT is available at: https://www.humanrights.gov.au/news/stories/opcat-and-australia.

“It is clear that we need consistent standards of treatment and monitoring across youth justice facilities in Australia, to ensure that we are fulfilling our responsibilities under the Convention on the Rights of the Child,” said Commissioner Mitchell.

“We must ensure that we foster a culture of care in our youth justice systems, that is grounded in respect for human rights and the best interests of children and young people.”