NATO and women in the military 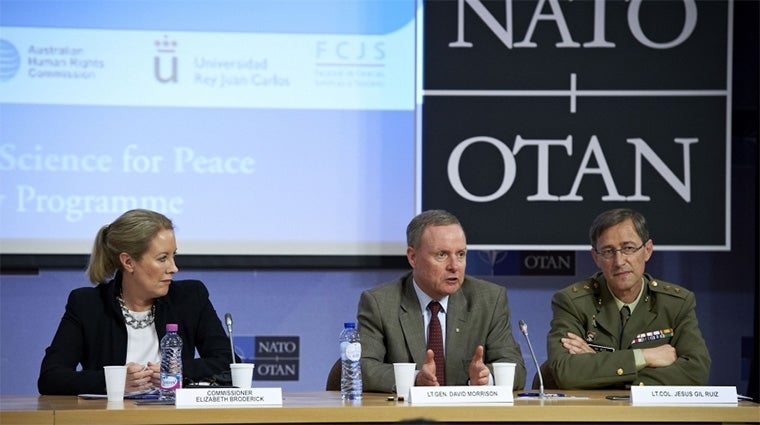 Sex Discrimination Commissioner, Elizabeth Broderick, was invited by NATO to present at two parallel conferences in Brussels from 1-3 June 2015 focused on gender equality in the armed forces. She was accompanied by the recently retired, Chief of Army, David Morrison. The conferences formed part of ‘Gender Week’ at the NATO headquarters, with a focus on increasing the representation of women and implementing United Nations Security Council Resolution (UNSR) 1325. The sessions were conducted before a range of senior military and NATO personnel, Ambassadors, members of the European Union and academics.

Since the implementation of the recommendations of the reports of the Review led by Elizabeth Broderick – the Treatment of Women at the Australian Defence Force Academy (ADFA) and in the Australian Defence Force (ADF) – the ADF has achieved significant cultural change and has accelerated efforts to increase the representation of women in its three Services – Navy, Army and Air Force – across all ranks.

These achievements, and the strategies that have underpinned their success, are considered to be best practice across NATO member and partner militaries and both Elizabeth Broderick and the Chiefs of the ADF, including David Morrison, have been recognised as pivotal to the reforms.  The presentations clearly demonstrated that a gender diverse military is a more capable and operationally effective military.

The unique partnership that has since evolved as a result of Ms Broderick’s review, where both the Australian Human Rights Commission and Australia’s military collaborate on embedding cultural reform across the three services, was considered by NATO nations as particularly remarkable.

Ms Broderick and Alexandra Shehadie, the Director of the Cultural Reform in the Australian Defence Force project at the Australian Human Rights Commission, were also invited to present on these issues at the Geneva Centre for Security Policy on 4 June 2015.

Further details on the Australian Human Rights Commission’s work with the Australian Defence Force can be found here http://www.humanrights.gov.au/our-work/sex-discrimination/projects/coll…

and to the NATO conference here