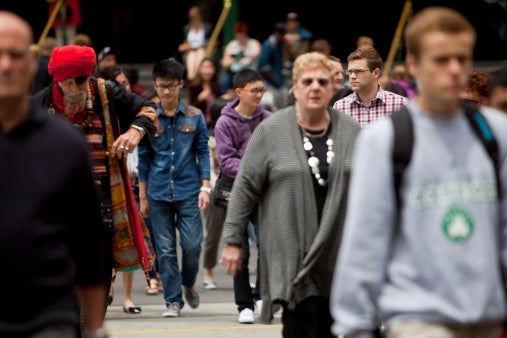 As an independent statutory officer, Human Rights Commissioner Tim Wilson used a wide-ranging speech to the Sydney Institute on Tuesday to articulate his agenda, declaring: “I do not want to introduce a new human rights law during my term of office. Instead, I want to strengthen the non-legislative defence of human rights.”

Commissioner Wilson also used his Sydney Institute speech to argue that freedom of association, freedom of religion, freedom of expression and property rights are “forgotten freedoms” that have been compromised by laws and government intervention.

The Commissioner promised he would take discussion about human rights back to their origins and said he will spend the next five years reconnecting human rights to their foundations.

"Human rights are not the same as freedoms," he said.

"Human rights are the protection against government encroachment. Freedoms are the exercise of those rights.

"To that end there are four foundational human rights that need to be strongly reasserted – freedom of association, religion, expression and property.

"They are ‘the forgotten freedoms’."

Commissioner Wilson said the most immediate forgotten freedom that needs to be defended is freedom of expression.

The Commissioner argued that enquiries such as the Royal Commission into Aboriginal Deaths in Custody, as well an Australian Law Reform Commission report into multiculturalism and the Human Rights and Equal Opportunity Commission’s report into racist violence did not support the Racial Discrimination Act in its current form.

“The assumed conclusion is that these inquiries argued for the introduction of these laws. The reverse is true,” Commissioner Wilson said.

“There is no dispute about the importance of tackling racism.

“The debate is about the extent that we use law to achieve that objective. Non-legislative measures such as codes of conduct are more effective and avoid the imposition of censorship.

“I want to strengthen this non-legislative defence of human rights. To that end, my first step is to organise a symposium on free speech later this year.

“My objective is to bring together the key interests in academia, civil society, the legal community and business to put all free speech issues on the table and build a new alliance of the need for free speech reform.

“In the second half of the year I will commence a national consultation on human rights issues in Australia, with a particular interest on ‘the forgotten freedoms’."

Commissioner Wilson said he would go beyond the Melbourne-Sydney-Canberra triangle so that he could understand the human rights concerns of people in suburban, rural and regional communities.

Read the full text of Commissioner Wilson's speech to the Sydney Institute, 13 May 2014.