Report shines a light on universities 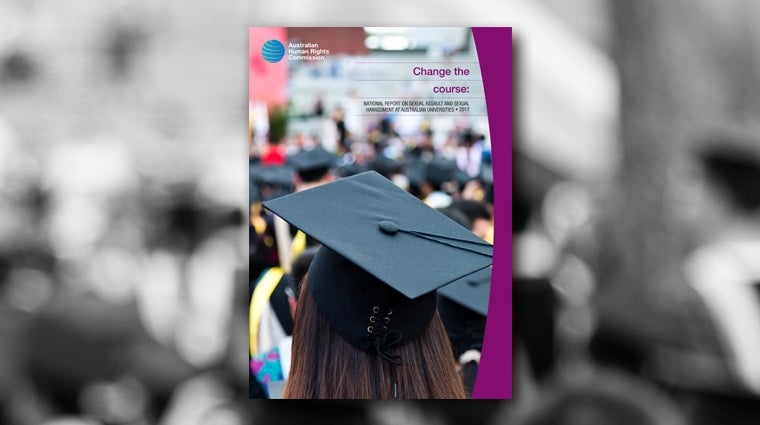 The Australian Human Rights Commission today released its landmark report on the nature and extent of sexual assault and sexual harassment at Australian universities.

The data in the Change the course report is based on a national survey completed by more than 30,000 university students across all 39 Australian universities. All of these universities, through peak body Universities Australia, committed to this work.

“Sexual assault and sexual harassment have a devastating physical, emotional and psychological impact on individuals. More than 1800 people made submissions to the Commission, sharing their stories about the way their lives, studies and mental health have been impacted by their experiences.”

The Change the course report shows that sexual assault and sexual harassment are occurring to varying degrees across most areas of university life.

“Almost a third of sexual harassment reported in the survey occurred on university grounds or in teaching spaces, while one in five of those who were sexually assaulted said that this occurred at a university or residence social event,” said Commissioner Jenkins.

“We found that colleges are a particular area of concern, particularly for women who were four times as likely as men to have been sexually assaulted in this setting.”

“While anybody can experience sexual assault or sexual harassment, it is clear from the data that women at university experience these behaviours at disproportionately higher rates than men,” Commissioner Jenkins observed.

“This adds weight to the body of evidence that highlights disturbing rates of sexual violence against women in Australia.”

The Commission’s research revealed that most students who were sexually assaulted or sexually harassed at university in 2015 and 2016 did not make a formal report or complaint to their university.

“Only 6% of students surveyed thought their university was currently doing enough to provide clear direction on procedures and support services,” said Commissioner Jenkins.

“Only 4% thought this was the case in relation to sexual assault.”

Commissioner Jenkins also stressed the importance of ensuring that survivors of sexual assault and sexual harassment are given the support they need. She noted in particular the vital contribution of students and advocates – such as the Hunting Ground Australia Project – whose work provided the platform for the Commission undertaking this important and ground-breaking survey.

“The evidence is clear that universities need to do more to prevent such abuse from occurring and to build a culture that responds appropriately to these incidents by supporting victims and sanctioning perpetrators.”

The report includes nine recommendations on areas for action and reform – eight of which are directed at universities and one of which is aimed at university colleges.

“The fact that all 39 universities committed to the National Survey is a positive indication of their desire to take action in response to this report,” said Commissioner Jenkins.

“By implementing the Commission’s recommendations Australia’s universities can contribute to changing the national culture to one that does not tolerate sexual assault or sexual harassment in any form. I am committed to working with students and universities to assist in this process however I can.”

The survey was delivered by Roy Morgan. The Commission sought and received ethics approval for the national survey from the Human Research Ethics Committee at the University of New South Wales.