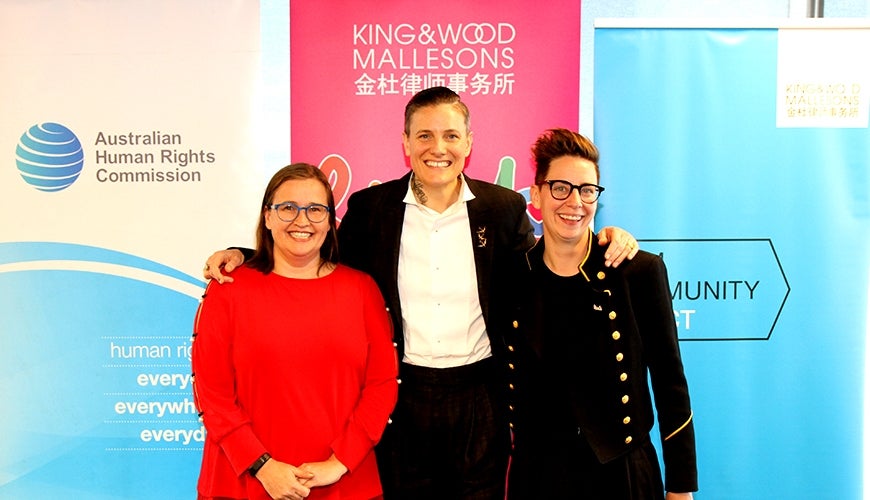 Casey read extracts from Godspeed, a poetic and wild memoir of life as a teenage swimmer making a splash at international meets, competing for France in the 1996 Atlanta Olympics and subsequently battling addiction and self-harm.

They see discussions about Godspeed and their diverse career as an exploration of “how I have ended up 21 years later in this seat alive and well, fulfilled, well-loved and intact, and with my capacity to love intact.”

In recent years Casey has been a pioneer in the modelling industry as the first female signed to a male modelling agency.

“I could see a potential usefulness in [me] stepping into that mainstream space,” Casey said.

“I think it is important for me to talk about [gender issues], especially if there are young people like me listening, who feel like they do not really fit in anywhere.”

Signing with Ford Models at age 36 came after a teenage Casey was offered a contract with Pantene shortly after qualifying for the Olympics to show off their long, flowing black hair.

“They said we would like to give you a contract, I said ‘amazing’, and then I go and shave my head, so that went away’ Casey said.

“I have always been curious about the body…that curiosity around objectification, around what it means to have been born a girl, what it means to be biologically female and what that has looked like around my journey around my own identity.”

Commissioner Jenkins thanked Casey for “talking deeply and intimately about yourself” and for answering a wide range of questions canvassing their swimming career, gender identity, struggles with addiction and the process of penning a raw, no-holds-barred memoir.

“It is such a privilege to hear you speak,” she said.

“We know sport is a human right and yet because of our view about gender roles…we know there are huge struggles and barriers for people who identify as gender diverse, as non-binary or transgender to participate in sport. This an area we are currently working on at the Commission.” Ms Jenkins said.

The next Rights Talk featuring Casey Legler and Kate Jenkins in conversation will be in Melbourne on May 6. Tickets are available here.