Know Where the Line Is awareness raising strategy launch

I would like to begin by acknowledging the Gadigal people of the Eora nation, upon whose land we are meeting, and pay my respects to their elders past and present.

And I’d like to welcome you all and thank you for coming today. I’d particularly like to thank Ged Kearney and Kate Carnell for agreeing to speak alongside me. We’re so pleased to have their support on our National Know Where the Line Is awareness raising strategy. It’s incredible to see three unique agencies – all, for the first time, led by women – coming out so strongly and taking a stand against sexual harassment in the workplace.

I also would like to thank YOLO our creative design team who have done fantastic work on this strategy. I’d like to specifically thank Jenny Lambert, who stepped in to the breach through the transition from one CEO to another at ACCI. And finally, I’d like to thank my team, in particular Emily Maguire who has brought this strategy together.

Sexual harassment. Every woman has her story so I thought I’d start by telling you mine.  This is the first time I have ever told my story in public.  I don’t tell it because it is more important than anyone else’s.  I tell it because it is only recently that I have realised that the basics of my story are not just relevant to me.  The features that underpin my story underpin all stories of sexual harassment – yours and mine.  That is – a power imbalance, fear, embarrassment and shame, an inability to make a formal complaint and a positive outcome through the intervention of bystanders.

At the time of the sexual harassment, I was a young lawyer setting out on my career, learning the ropes, making connections, determined to achieve.  One evening I was invited to a small drinks party hosted by the firm.  I was delighted to be included. After all I was the most junior solicitor and I was keen to learn and build professional relationships.  I was introduced by one of the partners to a major client of the firm.  We had a very brief chat - he being a powerful man representing the largest client, and me a female junior underling to be sure.

Next day I was sitting at my desk when I received a call from him.  “Would I have lunch or dinner with him?” he asked.  I remember being torn at the time – should I, should I not?  After all he was as old as my grandfather, but could I risk alienating the firm’s major client?  Of course not.  My decision was made.

We met for lunch the next week and the old story of “my wife doesn’t understand me blah, blah” ensued. I asked him about his children and his grandchildren but I remember feeling distinctly uncomfortable as his intentions were clear – I knew that something was just ‘not right’.
Unfortunately that was not the end of it.  For several weeks after he rang regularly making me feel exceedingly uncomfortable, unable to enjoy work and spending most of my time thinking of avoidance strategies. I felt I couldn’t approach the leadership team as they were good friends of this man, I couldn’t make a formal complaint as we stood to lose a major client, I had no right of recourse under the Sex Discrimination Act at that time as he was a client of the firm not my employer – so I did what many women do – I told my girlfriends at work, concerned bystanders, about his behaviour and asked for advice.  A plan was hatched, and every time he rang someone would transfer him to one of these courageous women who would tell him that unfortunately I was not available.   After a week he stopped calling and I once again I went back to enjoying my work.  But for some years later I felt trepidation at client events for fear that I might be put in a similar compromising situation.

What happened to me is nothing compared to the examples I hear about every day.  But like most cases of workplace sexual harassment common elements exist – a significant power imbalance, an inability to tell management, embarrassment, shame, the positive intervention of bystanders and most importantly, I stopped enjoying a job I otherwise loved.

Our Know Where the Line Is strategy is designed to make people stop and think.  Not just perpetrators of sexual harassment but just as importantly bystanders – people who see sexual harassment happening or learn about it later. Without the intervention of bystanders in my story, I may not have found a solution.

To many of us sexual harassment in the workplace is epitomised by Mad Men. It’s the silver fox, Roger Sterling clutching a whiskey in one hand and Joan Harris’s bottom in the other, ogling at every new secretary that starts in the office.

The Australian Human Rights Commission has been conducting national surveys to determine the prevalence of sexual harassment in Australia since 2003. And what these surveys have consistently shown is that Australians don’t really have a very clear understanding of what sexual harassment looks like.

That’s why we’ve developed this campaign. This partnership between ACCI, the ACTU and the Commission shows that business, unions and government – supported by the wider Australian community – are all committed to eradicating harassment in our workplaces. But in reality, we’re not going to make any real headway until everyone has a shared understanding of what sexual harassment actually looks like in everyday work life.

Until people know where the line is, and know what comments, behaviour and language cross this line, we’re not going to be able to have a fully informed, national discussion about this issue.
And until people in workplaces of all sizes start realising that sexual harassment is serious and harmful, not only for the person who is experiencing the harassment, but for the broader work environment and the productivity of the business, they’re not going to see it as something they need to speak out about.

To support workplaces to create safe, equitable and respectful environments, we’ve developed Ending workplace sexual harassment: A resource for small, medium and large employers. And throughout the coming months as the Know Where the Line Is awareness raising strategy rolls out in workplaces across the country, we’ll also be developing practical tools for workplaces, particularly small businesses, to use in creating evidence-based policies around harassment prevention and response.

I’m pleased to say that, in Australia, we’re finally beginning to understand the impact that domestic and family violence can have on those who experience it. But all too often, we don’t think in the same way about sexual harassment.

We think the person crossing the line didn’t mean any harm, or say to ourselves ‘he’s just like that – don’t take it personally’. And every day the courageous people who stand up and speak out when they see harassment at work are accused of not being able to take a joke, and derided as ‘too PC’.

But – as all of us in this room know – sexual harassment isn’t a joke and it does have a serious impact on those who experience it. People like Andrea, who said she ‘was too scared to say anything’ but that she’s been ‘upset and ashamed ever since’ she was harassed. Or Katie, who said she ‘felt so intimidated’ that she ‘dreaded going to work’. Or the thousands of people who use words like ‘embarrassed’, ‘scared’ and ‘powerless’ to describe their experiences of sexual harassment in the workplace.

We know that sexual harassment has a negative impact on women’s health and wellbeing, their career progression and their long term economic security. We know that it also costs businesses – lost productivity, team conflict, compensation and staff turnover.

Why then, is it still so common in Australia? 1 in 5 people have experienced workplace sexual harassment since the age of 15. Most of these people are women – although male harassment of other men is also on the rise.

I think the answer to this question is complex, but I believe there is one thing that would make a difference. And that’s making this personal. For the women and men who experience harassment, it is, of course, already personal. But for their colleagues, their employers, the other people they interact with at work - I’m not quite sure we’ve tugged at their heartstrings. When the discourse surrounding harassment is that the women who experience it are ‘money grubbing wingers who should be flattered at the attention’ and the men who experience it are ‘fairy boys who need to harden up’ it can be difficult to make people reflect personally on this issue.

But asking yourself if you’d feel comfortable with your daughter working at a workplace where the blokes jokingly rank the women’s appearance is important. Asking yourself whether you’d feel comfortable with your sister or your mother working in an environment where it was commonplace to send around ‘Friday funnies’ loaded with sexual jokes is important. Until we all realise that the person you heard getting harassed could be your partner, your daughter or even you – then we’re unlikely to make any headway.

So whilst this strategy aims to encourage employees to think about where the line is – for them, and for their colleagues – it is also trying to encourage them to take action if they witness or hear about harassment in their own workplaces.

Our call to action is for people to see, talk and support.

We want people to see harassment when it occurs, to know where the line is. We’re asking employees who see or hear something that makes them feel uncomfortable, not to ignore it anymore.

We want people to talk. I know it takes courage to speak up but the more people talk to their boss, their colleagues or even directly with the person whose behaviour is crossing the line, the more others will feel confident in doing the same. To assist people, we have developed a fact sheet for employees on identifying sexual harassment, what action they can take and what bystander action can be taken.

And we’re reminding people not to underestimate the power of support. I know that from my own story. Our research shows that the most common action people took when they saw sexual harassment occurring was to talk to the person being harassed and to offer them support. We want this strategy to make it really clear that supporting a colleague can help them stand up and take action for themselves.

I want to finish up today by asking you all to reflect back on the first place you worked. Think about what that culture was like, the work environment. Now think about your daughter or your son, niece or nephew or another young person in your life. And ask yourself: ‘Would they be comfortable working where I did when I was 20? When I was 35? Would I be happy for them to work where I am now?’ And until all of us in this room – and all of us in this country – can answer that question with a resounding ‘yes’, until we can walk into any organisation and know that the culture is one of respect and equality then we still have more work to do. 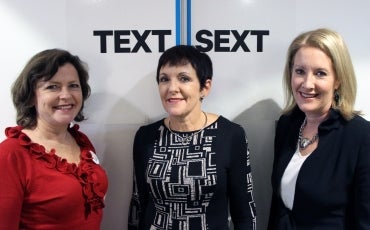 Sexual harassment: Know Where The Line Is

Women in the Australian Defence Force