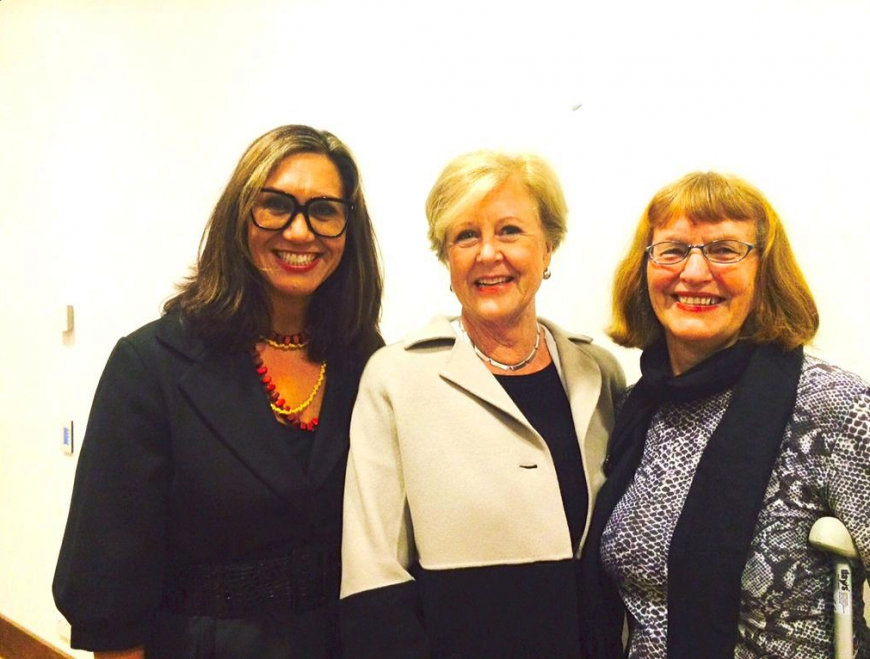 Thank you for your warm welcome to the National Center for Indigenous Excellence. I acknowledge the traditional owners of the land on which we meet, the Gadigal people of the Eora Nation and respect their elders.

The Intervention is an important collection of essays, poems, personal stories, even press releases, that presents a despairing, achingly sad, sometimes beautiful and creative, but also, deeply troubling perspectives on the Commonwealth’s emergency intervention in the Northern Territory in June 2007. The anthology achieves its aim of giving voice to the largely voiceless First Nations peoples who have been profoundly damaged by the Intervention over the following 8 years.

As a ‘mere’ lawyer when considering legislation such as the NTER for compliance with human rights and the Racial Discrimination Act, I would examine the precise terms of the new laws, and consider the explanatory memorandum and the second reading speech to Parliament in order to understand the scope and purpose of the Intervention.

But this anthology does so much more than document the legal terms of the Intervention.

Rather, it is a work of art in which the authors provide individual perspectives on the impacts of the Intervention. There is a kaleidoscope of writing styles and approaches that are sometimes reflective and sometimes instantaneous responses, ranging from the time of the intervention in 2007 to the present. One essay was written on the day of the Martin Place siege.

Woven through these personal experiences and views are the legal provisions, giving a chilling context to shame, blame and political opportunism that was the Intervention.

Why was the Intervention legislation passed?

Earlier reports of neglect and abuse of children had long been available, but had attracted little political or media attention. The Royal Commission into Aboriginal Deaths in Custody 1996 was followed 1997 by the AHRC Bringing them home report.

The findings of these reports were, in turn, confirmed by the Little Children are Sacred Report June 2007 by the NT Government’s Board of Inquiry into the Protection of Aboriginal children from Sexual abuse, chaired by Pat Anderson and Rex Wild QC into abuse and neglect of Aboriginal children in the Northern territory based on extensive consultation with indigenous Australians and the wider community.

By contrast with the earlier reports, and making the critical difference, was the discussion of the Little children are Sacred Report on ABC’s Late Line program by Tony Jones. This program achieved what formal reports cannot do. By exposing the high level of sexual abuse of children in Aboriginal communities, the public exposure was effective in galvanizing the Howard government into extraordinary action. Extraordinary ...because, over one 48 hour weekend, and without consultation with the indigenous communities of the NT, a new regime was devised for intervention.

1. Lack of consultation, lack of transparency: The Act did not implement the primary recommendation of the Little Children are Sacred Report that recommended:

“ Commonwealth and NT governments to establish immediately a collaborative partnership with an MOU to address the protection of Aboriginal Children from sexual abuse. It is critical that both governments commit to genuine consultation with Aboriginal people in designing initiatives for Aboriginal communities.”

Ignoring this first and critical recommendation, the authors demonstrate that the Intervention legislation used the Anderson/ Wild Report, and outrage generated by the ABC documentary, as camouflage for wider reforms pursued by the Howard government that failed to consult and above all else failed the children.

The UN Declaration of the Rights of Indigenous Peoples calls for free, informed and prior consent. The Intervention should have built on local strengths and cultural values:

NTER was, as is uniformly argued by authors, nothing better than camouflage for wider government strategies of assimilation and control.

Sadly, the needs of children received scant mention in the 500 page NTER Act itself.

Let me give you an example of why local community consultation is so important. A year or so ago with Mick Gooda the Social Justice Commissioner of the AHRC, I visited the Eva Valley and Beswick Community Centre. Mick showed me two signs. One had been in the local language as a community agreed ban on alcohol and had been respected and successful for some time. The other was the new Blue sign in English, imposed as part of the Intervention that is on the back cover of the book we are discussing tonight. This was much resented and alcohol was back in the community.

A disturbing trend over the last few years has been an overreach of executive government discretion and a willingness to reject the rule of law. One of the most concerning aspects of the Intervention was the suspension of the RDA. This Act gave effect to the Convention on the Elimination of Racial Discrimination and is the most important piece of human rights law ever introduced in Australia. It is widely acknowledged as a vital foundation for our generally successful multicultural society.

The overwhelming community support for retention of section 18C of the RD Act over the last year or so has been an encouraging demonstration that this provision and the Act as a whole are recognized as important to our multi-racial community. While the RDA has since been reinstated, and racist measures accepted by the High Court as valid “special measures”, the indirect and substantive racism of the Stronger Futures legislation continues.

The readiness of Governments and respective parliaments to pass laws that violate both Australian legislation and long recognized international obligations is troubling. The Labor party supported the Coalition’s NTER just prior to the 2007 election and chose not to protect the rights that were being sacrificed. The Party also agreed to extend the intervention though the Stronger Futures Act in 2012. The failure by Parliament to act as a check and balance on Executive Governments raises the wider question of the future of Australian democracy and the rule of law.

Several authors have commented on the ‘big lies’. One such distortion, that pedophile rings operate in indigenous communities, was later categorically rejected by the Australian Crimes Commission.

The second damaging distortion was that the indigenous populations of the NT was exceptionally likely to abuse Aboriginal children. The Australian Institute of Family Studies and the current work of the Royal Commission into Institutional Responses to Child Sexual Abuse demonstrate that neglect and abuse of children is a nationwide phenomenon, evident in QLD, Victoria, the ACT, SA and NSW. Moreover, the incidence of abuse is higher in these states than in the NT.

Rates of abuse of Aboriginal children is estimated to be 7-8 times higher in the Indigenous community than in the general Australian populations, an intolerable situation that demands nation wide consultation and collaboration to solve core problems of poor health and lack of support funding for health services. One thing is clear, there is a persistent inability of society to protect children. Indeed, as you may know, the AHRC has reported on the health impacts of prolonged detention of asylum seeker children in Australian and Nauru, a report that has been confirmed by the Moss Report but rejected by the Government as an inconvenient truth.

The dilemma in responding to distortions of fact is that once a falsity is asserted, it lodges in the public mind. Despite, incontrovertible evidence to the contrary, the falsehood is exceptionally hard to dislodge and becomes a form of truth. Of course Little Children are Sacred and, of course, we must do what we can as a nation to stop their neglect and abuse. But we should do so consistently with human rights. To juxtapose human rights versus child protection is a false binary. Australia can both protect our vulnerable children and respect the fundamental rights of our first nations peoples to dignity and meaningful consultation and consent to laws that affect their lives.

The following statement from the Yolnguw Makarr Dhuni in October 2013 expresses the anger:

We want self-determination. We want democracy. We want the power of the people of Arnhem Land and all Aboriginal communities to be recognized and our rights respected.
We will not tolerate this bullying and it is no way to treat human beings.
We demand an apology from the Australian Government.

May I conclude by recalling the words of Mick Gooda, my colleague at the Human Rights Commission. He wrote in his 2014 Report to Parliament: “work with us, not for us”. A powerful reason why even good faith measures to address the neglect and abuse of Aboriginal children continue to fail is the lack of meaningful engagement with indigenous communities. The consequence of inadequate consultation is the failure of the Intervention and the Stronger Futures Act. Despite their significant financial cost, as Eva Cox points out, the evidence is that neither program can claim any significant positive results. All this at the human cost of breaching fundamental rights, demeaning and stereotyping Australia’s First Nations Peoples and impeding their right to self-determination.

Neither the Declaration on the Rights of Indigenous Peoples nor the ICCPR calling for respect for Aboriginal culture are part of Australian law and cannot be enforced directly by our courts. I believe is now urgent that Australia implement the Declaration and the International Covenant as part of our law to provide a benchmark against which the validity of government legislation can be assessed. If we had these safeguards in place it might be possible for the courts and Parliament to avoid the excesses of laws like the Intervention in the future.

May I commend this anthology to you as a powerful witness to yet another sad episode in Australia’s history. While it documents a ‘trail of sad hearts’ I take a positive view. This anthology demonstrates the strength and clarity of purpose of its authors in showing the human impact of the Intervention. It should be on school and university reading lists and poured over by book club members. Fair minded Australians who read this collection will be better informed and better able to challenge governments that make laws without indigenous consultation and which have a racially discriminatory impact.

Congratulations to the editors, the author and those wonderful people who subscribed to its publication.