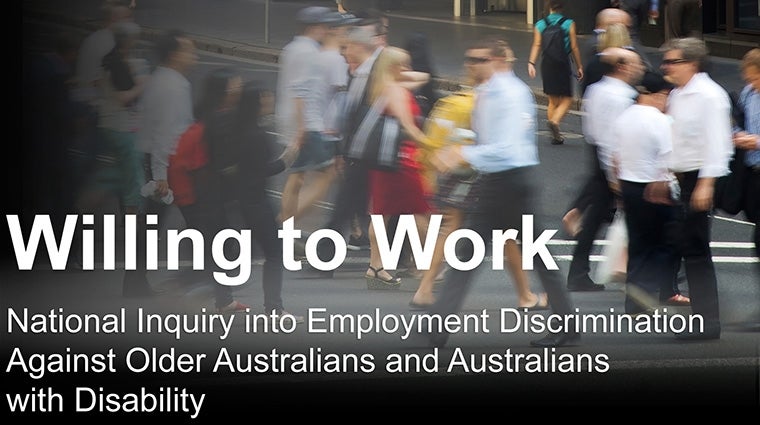 The Commission has launched Willing to Work: A National Inquiry into Employment Discrimination Against Older Australian and Australians with Disability.

The Inquiry will be conducted at the request of the Attorney-General, Senator the Hon George Brandis QC, who will be attending and officially launching the Inquiry this morning. It will be led by the Age and Disability Commissioner, Susan Ryan.

“Willing to Work is most timely as employment rates for both older people and those with disability remain unacceptably low,” said Commissioner Ryan.

“Research by Deloitte shows that increasing the older workforce by 5 per cent would bring an extra $48 billion annually to Australia’s GDP,” she said.

The inquiry will seek to identify the barriers that prevent people from working, and in consultation with employers, affected individuals and other stakeholders establish strategies to overcome these barriers.

The Inquiry will shortly publish an issues paper, a call for submissions and plans for consultations around the country.

“We hope to engage employers of all sizes across public and private employment as well as older people and people with disability themselves and their representative organisations. We will have the cooperation of the relevant government departments. The common goal is to improve opportunities for those experiencing workplace discrimination and maximise human potential to the benefit of all of us,” said Ms Ryan.

The Inquiry will conclude and report by July 2016.

For more information on Willing to Work see the Inquiry webpage.

The Disability Discrimination Act 1992 (Cth) (DDA) and the Age Discrimination Act 2004 (Cth) (ADA) ensures that people are not treated unfairly because of their disability or their age respectively. The DDA and the ADA protects people against
discrimination in various areas of public life including employment, provision of goods and services, education, and administration of Commonwealth laws and programs. If you would like more information about what might be covered by the DDA or the ADA or you would like to make a complaint of discrimination, you can contact the Australian Human Rights Commission’s National Information Service on:

You can also make a complaint online at www.humanrights.gov.au/complaints/make-complaint