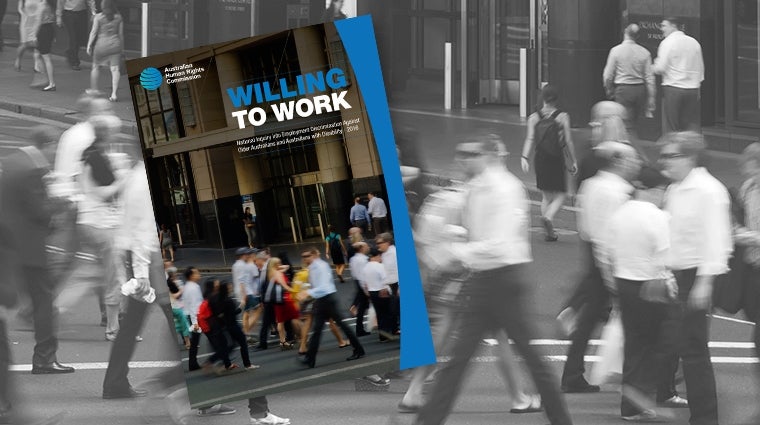 Too many older people and people with disability are denied jobs because of discrimination based on age or disability.

Speaking today at the launch of Willing To Work, Age and Disability Discrimination Commissioner Susan Ryan warned that people in their 50s who lose their jobs face decades of unemployment.

“Australian Bureau of Statistics data shows that while people aged 55 years and over make up roughly a quarter of the population, they only make up 16% of the total Australian workforce.

“This age cohort is the fastest growing in Australia, and will remain so for the foreseeable future.”

“This sharp decline cannot be allowed to continue.

“The number of over 65s will double by 2055, when life expectancy will be well over 90 for both men and women.

“Without the changes we recommend, people who lose their jobs in their 50s may live up to another forty years without paid employment.”

“People with disability are more likely to be unemployed than people without disability and to have longer periods of unemployment.

“People who are willing to work but are denied the opportunity are also denied the personal and social benefits of dignity, independence, a sense of purpose and the social connectedness that work brings.

“Many highly skilled individuals are being shut out of work because of underlying assumptions, stereotypes or myths associated with their age or their disability.”

Commissioner Ryan described the Willing to Work report as “an historic first”.

“We have never had such a clear or detailed national picture of what happens to older workers and those with disability in the labour market.

“The exclusion of capable and skilled older people and people with disability from the workplace results in a massive waste of human capital and productivity. It drives increases in public expenditure that in the long term are not sustainable,” she said.

Key recommendations from the Willing to Work report include:

The Willing to Work report also recommends improvements to existing laws and policies and presents a suite of strategies for businesses and employers to improve employment of people with disability and older people.

The Australian Human Rights Commission hopes to see a speedy adoption and implementation of these recommendations, so that all Australians who are willing and able to work can do so.