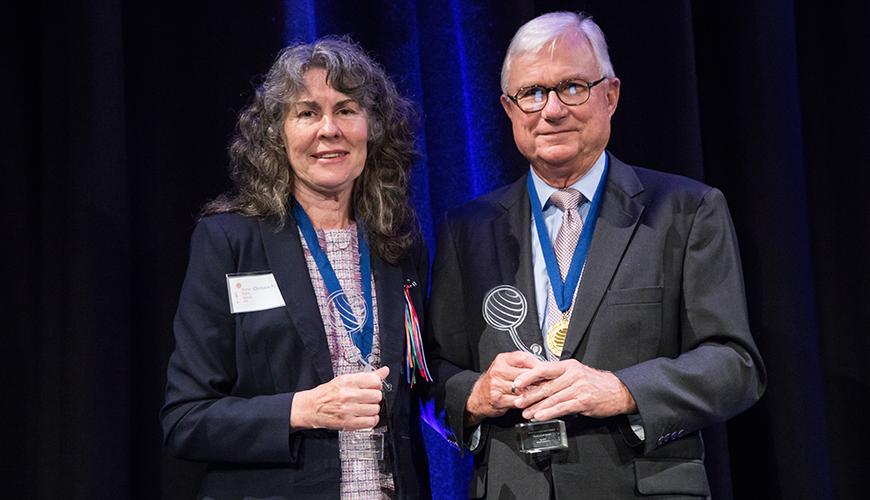 The Honourable Justice Peter McClellan AM and Chrissie Foster have won the prestigious 2018 Human Rights Medal for their enormous contribution to the Royal Commission into Institutional Responses to Child Sexual Abuse.

Accepting the Medal at today’s ceremony in Sydney, Chrissie Foster thanks her family and friends, past and present.

“This Awards is for Emma, Katie, Aimee and Anthony and for all children who have suffered from this insidious crime.”

Justice McClellan who led the Royal Commission for five years, spoke of his admiration for Chrissie, describing her as his “heroine” and acknowledging the five other Commissioners.

The Young People’s Human Rights Medal went to Saxon Mullins, who received a standing ovation. Saxon told her story of sexual assault on national television and highlighted the need for legal reforms. Her bravery led to a review of sexual assault laws in New South Wales.

“I’m so glad that we live in a society where we are more willing to listen to women, but with that I can’t forget the reason that I’m up here. And I think the root cause of that is something we can all change,” said Ms Mullins said as she accepted the prestigious Medal.
“It’s so easy to change and being in this room filled with amazing, inspiring people…I’m not doing anything later so do you wanna change the world?” she asked the crowd.
Close to 600 people attended the Human Rights Awards to recognise outstanding achievements across a range of categories.

Just one year on from the historic “YES” vote, Australian Marriage Equality has won the Community Organisation Award for its work in championing the rights of LGBTI+ Australians. AME successfully mobilised people across the country to support marriage equality.

Melbourne based lawyer Nyadol Nyuon, who is an advocate for the African-Australian community, received the Racism It Stops With Me Award.

NITV received the Media Award for ‘Guilty of being stolen’ – a powerful investigation which revealed that many children taken into state care — including Aboriginal children who were forcibly removed from their families — acquired a criminal record as a result.

Professor Andrew Byrnes, who is one of Australia’s leading academics on human rights has won the Law Award. He has been active on a wide range of social issues including gender equality, the death penalty, older persons and disability rights.

Konica Minolta Australia has received the Business Award for its leadership on modern slavery. Through its Ethical Sourcing Roadmap, the company prioritises contracts with ethical suppliers.

It has also implemented a family violence leave policy and has a commitment to gender and diversity equality.

The Tony Fitzgerald Memorial Community Individual Award has been presented to Catia Malaquias, the co-founder of All Means All - The Australian Alliance for Inclusive Education (AMA), for her advocacy for people with disability.

A new category of Government Award went to the Gold Coast 2018 Commonwealth Games Corporation for their ground-breaking human rights policy. The 2018 Games were the first major sporting event in Australia to include a Reconciliation Action Plan.

The President of the Australian Human Rights Commission, Emeritus Professor Rosalind Croucher congratulated all the finalists and the award recipients.

“We are proud to recognise the outstanding contribution of individuals and organisations in promoting and protecting human rights and freedoms.

“Just days about the 70th anniversary of the Universal Declaration of Human Rights, today’s event is our way of thanking and recognising all the Australian human rights heroes,” Professor Croucher said.