Working with Muslim communities in Australia: a review of the Community
Policing Partnership Project

The genesis of the CPPP is set out above. In some ways, the CPPP is a
response to issues raised through the Commission’s Ismaع۰Listen report (2004) and Unlocking Doors project (2007), which involved a series of consultations, workshops and
forums with Muslim and Arab Australians. Key recommendations in the Ismaع۰Listen report included adopting measures to
reduce the risk of marginalisation within these communities, particularly of
women. Consultations as part of the Unlocking Doors project found there
was a need to address the diverse impact on different Muslim communities of
racial and religious hatred; to improve community knowledge of how to report an
incident to police, the Commission and other agencies; and to improve police
understanding of the serious impact of racial hatred.

The specific objectives of the CPPP were to:

Police services and community groups were invited to form
partnerships and propose projects that would address these objectives. The
Australian Government provided funding of up to $10 000 for partnerships
between police services, the community, the Commission and the AMF to promote
social cohesion and counteract discriminatory views and intolerance towards
Muslim Australians. Building trust, establishing local networks and facilitating
a stronger sense of social participation, respect and inclusion within
communities were all key aims of these partnerships.

While the objective of the CPPP was to work with Muslim Australians,
eligibility for funding extended to partnerships with ‘issues relating to
cultural, religious and social harmony, and which include both police and
Australian Muslim communities and, if relevant, other local communities’.
(Commission, 2010, p. 3) As such, some of the projects funded under the CPPP
included culturally and linguistically diverse communities that are not
exclusively Muslim.

Two separate funding rounds were held. The first round was conducted in
November 2007 and the second in October 2008. Proposals were assessed according
to whether they would:

Priority
was given to proposals that were adequately documented, that built upon existing
networks and that had the capacity to expand the partnership to include
government, community, business or other relevant sectors. A steering committee
including representatives from police, Muslim communities, the Commission and
the AMF was established to consider the applications. A total of 23 applications
were received for the first round, of which 19 were funded. For the second
round, 39 applications were received, and a further 19 projects were funded
(Commission, 2010, p. 2). Many of the applicants asked for the highest amount of
funding available under the CPPP $10 000), but many received only a
proportion of the amount sought. For example, the Ethnic Council of Shepparton
and District was granted $10 000 for the Shepparton Police and
Community Project; however, the Campsie Police Local Area Command asked for
$5000 for their project Busting the myths Habibi, but $4500 was
approved.

Some projects were able to use the CPPP grant to leverage more funding from
other sources to support larger projects. Melbourne Citymission’s Project 3019, for example, secured $6000 under the CPPP, but it also
attracted funds from other sources, which together contributed to a total budget
of $66 000 for their 12-month project. The Granville Multicultural
Community Centre secured a further $5000 in funding, which allowed the project Muslim and African People in Harmony (MaAP in Harmony) to continue beyond
the life of the original funding cycle. The provision of in-kind support was
common across the projects. In-kind support took the form of staff time and
expertise, vehicles and venues, and was given by a range of organisations,
including local councils, federal and state governments, various state police
organisations, and community centres. For example, Victoria Police provided
transport costs and staff to support the project Attarwon, while local
government provided the venue at no cost. The Liverpool City Council greatly
helped the Police and Arabic Speaking Support Group by providing staff,
including community development officers, cleaners and security staff.

Of the funded projects, 17 were in NSW (45% of all projects) with five in the
Bankstown area (NSW) and three in Flemington (NSW). Ten projects (26%) were
funded in Victoria, with two in the Flemington (Vic) area. Three out of the five
projects funded in Queensland (13%) were conducted in association with the
Queensland Police Metropolitan South Region. One project had a national scope.
The distribution of these projects by jurisdiction roughly corresponds with the
geographical spread of the Muslim population in Australia. Data from the
Australian 2006 Census shows that 49.6% of the Muslim population in Australia
lives in NSW, 32% in Victoria and 6% in Queensland (Department of Immigration
and Citizenship, 2007). Many of the projects focused on local government areas
with strong Muslim population profiles.

The 38 projects funded during the course of the CPPP involved 40
non-government organisations (NGOs) as well as four national umbrella
organisations. These organisations partnered with police to conduct the
activities. (For a complete list of projects, see Appendix B). Six of the
projects consisted of partnerships involving more than one NGO. For example, Muslim Youth and WA Police Connect was conducted by Muslim Youth WA and
the Muslim Women’s Support Centre; three NGOs (SydWest Multicultural
Services, Migrant Resource Centre Tasmania, and Victorian Arabic Social
Services) received funding to conduct different programs in both funding
rounds.[8] All of the NGOs partnered
with local police, apart from the Diversity in Policing Mentoring Project, which was a national program coordinated by the Australian Federal Police
(AFP).

A number of local police agencies received grants to establish partnerships
with community groups to conduct programs under the CPPP. Ten programs were run
primarily by local police regions in collaboration with appropriate local NGOs.
The Diversity in Policing Mentoring Project was coordinated by the AFP in
collaboration with national bodies (including Islamic councils, women’s
groups and youth groups) representing the interests of people of culturally and
linguistically diverse backgrounds. 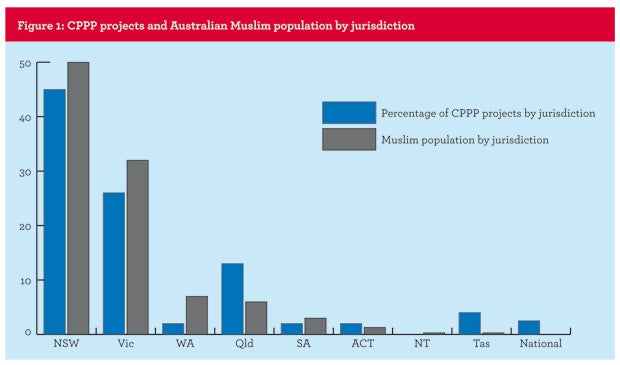 Acquittal reports sent upon project completion described relevant media
coverage of the projects. About 50% of the projects were able to attract some
level of media attention. This ranged from broadcasts and interviews on local
ethnic radio to local newspaper coverage and reports on national television.
Radio coverage was predominantly in forums broadcasting in languages other than
English, such as SBS Arabic radio and Voice of Islam radio.

Some projects, such as Tie the Knot and Attarwon, were the
subjects of articles in local newspapers (see Appendix A for an example from Tie the Knot), while others, such as MaAP in Harmony,
repeatedly invited local media to attend events and circulated press-releases
without success. A similar issue was faced by the project In my boots conducted by the Queensland Police Service, which commented:

‘...various forms of media were invited to attend; however, as
discovered from previous occurrences, gatherings of Muslims and non-Muslims is
[sic] not always “newsworthy”.’

[8] The Victorian Social Services
project was later conducted with the assistance of the Islamic Council of
Victoria.

[9] Migrant resource centres are
located in each state and territory and are primarily funded by the federal
Department of Immigration and Citizenship. They actively seek more funds from
local and state governments and other organisations to implement specific
ongoing or one-off community projects. Migrant resource centres were established
after the Migrant services and programs: report of the Review of Post-arrival
Programs and Services for Migrants (‘the Galbally report’)
recommended that the federal government fund multicultural resource centres in
areas with high migrant populations where there were few existing support
services (Galbally, 1978; Department of Immigration and Multicultural and
Indigenous Affairs, 2003). It was recommended that migrant resource centres
provide a range of services for ethnic communities, including help with
orientation through information and referral services, and support for community
capacity building among small and emerging communities (Department of
Immigration and Multicultural and Indigenous Affairs, 2003).