> back to Child Safe Organisations project

A forum attended by Indigenous leaders in the fields of health, mental health, and child and family support was held in Canberra on 29 January 2018, co-chaired by Richard Weston, CEO of the Healing Foundation and the National Children’s Commissioner. The Hon Ken Wyatt, MP, Minister for Indigenous Health opened the forum.

A paper on cultural safety presented to the Forum will be uploaded to the website project page shortly. Key themes emerging from the forum included: 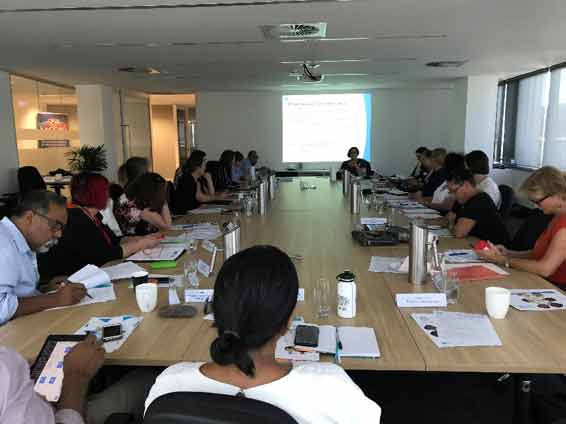 Meetings of the Implementation Advisory Group and Consumer Advocacy Advisory Groups are scheduled for early March to be held in Canberra and Melbourne respectively. Agenda items include an update on the work occurring through the Taskforce established by the Prime Minister to consider and co-ordinate actions on the recommendations of the Royal Commission into institutional responses to child sexual abuse. Advisory groups will consider revisions to the draft National Principles following feedback from both sector and consumer advocacy group consultations, the cultural safety forum and consultations with children and young people.

At the meeting Advisory Group members will comment on some of the draft tools and resources under development. In particular:

The Council of Australian Governments met on 9 February 2018. At the meeting, the Prime Minister and First Ministers welcomed the progress on the National Principles for Child Safe Organisations, agreed the importance of creating organisations where children are safe from abuse and neglect, and acknowledged the work underway to establish a national redress scheme. First ministers committed to responding to the recommendations of the Royal Commission’s final report in June 2018.

At the meeting, leaders heard from the e-Safety Commissioner on initiatives to combat cyberbullying. The full Communique is available here: http://www.coag.gov.au/meeting-outcomes/coag-meeting-communiqu%C3%A9-9-february-2018

Senate committee inquiry into the adequacy of existing cyberbullying laws

The development of principles, or standards in policy and practice and the implementation of resources for the CSO project, to deliver across Australia, covers the full range of organisations where children go, such as schools, youth groups, sports clubs and churches. These standards include specific references to the obligations of organisations to combat bullying and to deliver safe physical and online environments. It is envisaged that the National Principles and related resource material would be endorsed by COAG. COAG released a Communique on 9 February welcoming the progress on the development of the National Principles for Child Safe Organisations and the establishment of a working group to consider existing and potential initiatives to help combat bullying and cyberbullying. Read more here: https://www.coag.gov.au/meeting-outcomes/coag-meeting-communiqu%C3%A9-9-february-2018\

And in case you missed it…….

The Attorney-General, the Hon Christian Porter, MP has launched the 2017 Children’s Rights Report, featuring the work of the National Children’s Commissioner over the past year. See the report here:
https://www.humanrights.gov.au/our-work/childrens-rights/publications/childrens-rights-report-2017

Chapter 4 reports on Children’s safety and wellbeing and discusses what we know about child harm in Australia, and about ways of keeping children safe from harm, with a particular focus on children and young people in organisational settings. The report:

Chapter 3 of the report deals with young parents and their children. It is the summation of the National Children’s Commissioner’s eight month investigation of the experiences and needs of young Australian parents and how to improve outcomes for young parents and their children. The report makes 16 recommendations. The Commissioner’s editorial can be found here:
https://www.humanrights.gov.au/news/stories/young-parents-need-our-support-not-judgement

To receive newsletter and updates, subscribe to Child Safe Organisations updates on the project page.