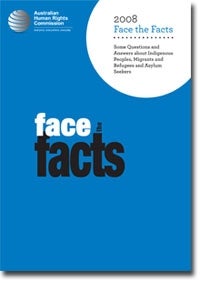 Some Questions and Answers about Indigenous Peoples, Migrants and Refugees and Asylum Seekers (2008)

The Australian Human Rights Commission is conducting a survey on the publication, Face the Facts: Some Questions and Answers about Indigenous Peoples, Migrants and Refugees and Asylum Seekers, and is interested in your feedback!

The survey will take approximately 10 minutes to complete and is anonymous. You may complete the survey online at: https://www.surveymonkey.com/s/face_the_facts by Monday, 10 December 2012.

Chapter 2 Questions and Answers about Migrants and Multiculturalism

Chapter 3 Questions and Answers about Asylum Seekers and Refugees

It is my great pleasure to release the 2008 edition of Face the Facts. This publication has become a permanent feature of the Australian Human Rights Commission’s, (previously known as the Human Rights and Equal Opportunity Commission or HREOC), contribution to informed factual public debate about race, Indigenous peoples and cultural diversity in Australia. This edition of Face the Facts reflects the continued demand for accurate and easy to understand information about Indigenous peoples, migrants, refugees and asylum seekers. Today, as it was the case in 2005, Face the Facts remains the Australian Human Rights Commission’s most requested publication. As many of you are aware Face the Facts was first published in 1997 and updated in 2001, 2003 and 2005.

Face the Facts draws on primary research information from a variety of sources, including laws made by the Australian Parliament, government policies, academic research and statistics gathered by the Australian Bureau of Statistics including the 2006 Census data. The factual information gathered here, from various sources, provides a reliable snapshot of some aspects of the social realities of Australia.

While the structure and the format of the 2008 edition is consistent with previous editions to ensure that Face the Facts remains user friendly and accessible, the facts and information have been considerably updated. We have also significantly enhanced the publication to make sure that more relevant topics and recent issues are covered, like information about the Declaration on the Rights of Indigenous Peoples and the data on Australia’s diverse religious groups.

I believe that education, alongside legislation and policy, are central tools to break down barriers and promote community harmony and inclusion. In the coming few years, the 2008 edition of Face the Facts will form a core part of the educational function of the Australian Human Rights Commission as a tool to address attitudes and prejudices that are not based on sound facts.

For teachers, Fact the Facts is also produced as an education resource that complies with national curriculum standards and this resource can be downloaded from: https://humanrights.gov.au/education/face-facts

If you want to look more closely at a particular issue, we have included a list of recommended publications and websites. You can also visit the Commission’s website to find out more information regarding groups and issues included in Face the Facts (www.humanrights.gov.au). You can also access Face the Facts online at: https://humanrights.gov.au/education/face-facts

I hope that you find this edition of Face the Facts to be a useful resource that sheds light on the multifaceted realities of Australia today in order to encourage enlightened debate and thinking based on facts.