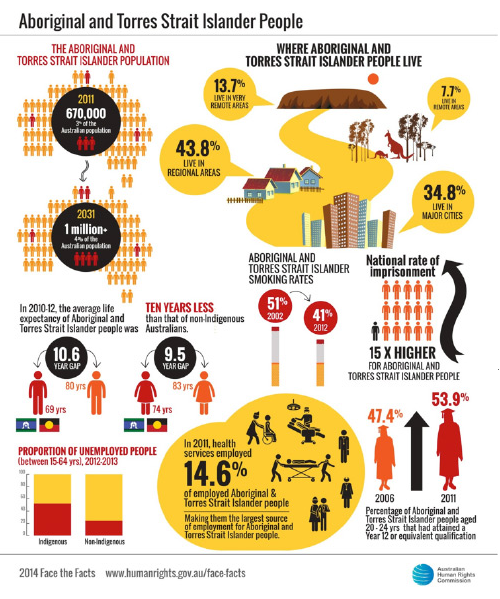 *This timeline is a support to 'The Stolen Generations' teachers resource for the years 9 and 10 National Curriculum History.

The First Fleet lands in Port Jackson – British settlement in Australia begins. Clashes between Aboriginal people and the settlers are reported over the next 10 years in the Parramatta and Hawkesbury areas.

Tasmanian Aboriginal people are resettled on Flinders Island without success. Later, the community is moved to Cape Barren Island.

British Select Committee examines the treatment of Indigenous people in all British colonies and recommends that 'Protectors of Aborigines' be appointed in Australia.

The Aboriginal Protection and Restriction of the Sale of Opium Act (Qld) allows the Chief Protector to remove local Aboriginal people onto and between reserves and hold children in dormitories. Until 1965 the Director of Native Welfare is the legal guardian of all 'aboriginal' children whether their parents are living or not.

Australia becomes a Federation. The Constitution states that Aboriginal People will not be counted in the census, and that the Commonwealth has the power to make laws relating to any race of people In Australia with the exception of Aborigines. The federated states therefore retain exclusive power over Aboriginal affairs until the Constitution is amended in 1967.

The Aborigines Act (WA) is passed. Under this law, the Chief Protector is made the legal guardian of every Aboriginal and 'half-caste' child under 16 years old. In the following years, other states and territories enact similar laws.

The Aborigines Protection Amending Act (NSW) gives power to the Aboriginal Protection Board to separate Indigenous children from their families without having to establish in court that they were neglected.

The introduction of the Infants Welfare Act (Tas) is used to remove Indigenous children on Cape Barren Island from their families. From 1928 until 1980 the head teacher on Cape Barren is appointed as a special constable with the powers and responsibilities of a police constable, including the power to remove a child for neglect under child welfare legislation.

The first Commonwealth/State conference on 'native welfare' adopts assimilation as the national policy:

"The destiny of the natives of aboriginal origin, but not of the full blood, lies in ultimate absorption … with a view to their taking their place in the white community on an equal footing with the whites."

Australian Aborigines Conference held in Sydney. Meeting on January 26, the 150th Anniversary of NSW, Aborigines mark the 'Day of Mourning'.

The NSW Aborigines Protection Board loses its power to remove Indigenous children. The Board is renamed the Aborigines Welfare Board and is finally abolished in 1969.

The Universal Declaration of Human Rights is adopted by the newly-formed United Nations, and supported by Australia.

The Convention on the Prevention and Punishment of the Crime of Genocide is ratified by Australia. It comes into force in 1951.

A national referendum is held to amend the Constitution. Australians confer power on the Commonwealth to make laws for Aboriginal people. Aborigines are included in the census for the first time.

By 1969, all states had repealed the legislation allowing for the removal of Aboriginal children under the policy of ‘protection’. In the following years, Aboriginal and Islander Child Care Agencies (“AICCAs”) are set up to contest removal applications and provide alternatives to the removal of Indigenous children from their families.

Neville Bonner is sworn in as Australia’s first Aboriginal Senator.

The Aboriginal Tent Embassy is pitched outside Parliament House in Canberra to demonstrate for Land Rights.

The Aboriginal Child Placement Principle, developed principally due to the efforts of Aboriginal and Islander Child Care Agencies (“AICCAs”) during the 1970s, is incorporated in NT welfare legislation to ensure that Indigenous children are placed with Indigenous families when adoption or fostering is necessary. This is followed in NSW (1987), Victoria (1989), South Australia (1993), Queensland and the ACT (1999), Tasmania (2000) and Western Australia (2006).

Northern Territory elections are held and for the first time voting is compulsory for Aboriginal people.

The Bicentennial of British Settlement in Australia takes place. Thousands of Indigenous people and supporters march through the streets of Sydney to celebrate cultural and physical survival.

The Council for Aboriginal Reconciliation is set up, funded by the Commonwealth Government. Parliament noted that there had not been a formal process of reconciliation to date, 'and that it was most desirable that there be such a reconciliation’ by 2001.

The Royal Commission into Aboriginal Deaths in Custody presents its report to the Commonwealth Government. It finds that of the 99 deaths it investigated, 43 were of people who were separated from their families as children.

The High Court of Australia hands down its landmark decision in Mabo v Queensland. It decides that native title exists over particular kinds of lands – unalienated Crown Lands, national parks and reserves – and that Australia was never terra nullius or empty land.

The position of Aboriginal and Torres Strait Islander Social Justice Commissioner is established within the Australian Human Rights Commission. The Commissioner's role is to monitor and report to Commonwealth Parliament on the human rights of Indigenous Australians.

The Going Home Conference in Darwin brings together over 600 Aboriginal people removed as children to discuss common goals of access to archives, compensation, rights to land and social justice.

The High Court hands down its decision in the Wik case. Wik concerned land, which is, or has been, subject to pastoral leases.

The Commission presents Bringing them home, its report on the findings of the National Inquiry into the Separation of Aboriginal and Torres Strait Islander Children from their Families to the Commonwealth Government.

The Commonwealth Government amends the Native Title Act. This restricts the way in which native title can be claimed.

Federal Parliament passes a motion of ‘deep and sincere regret over the removal of Aboriginal children from their parents’.
Mandatory sentencing in Western Australia and the Northern Territory becomes a national issue. Many call for these laws to be overturned because they have greater impact on Indigenous children than on non-Indigenous children.

The People's Walk for Reconciliation on 28 May occurs in state/territory capitals throughout Australia.
Australia appears before the United Nations Committee on the Elimination of Racial Discrimination. The Committee criticises the Commonwealth Government's inadequate response to recommendations from Bringing them home:

"While noting the efforts by the State party to address the tragedies resulting from the previous policy of removing indigenous children from their families, the Committee remains concerned about the continuing effects of this policy."

The Social Justice Report 2001 and Native Title Report 2001 are presented to Commonwealth Parliament. Both reports express serious concerns about the nation's progress in achieving the exercise of Indigenous rights.

The first member of the Stolen Generations is awarded compensation in the NSW Victims Compensation Tribunal for the sexual assault and injuries she suffered after authorities removed her from her family.

As part of the Victorian Government's response to the Bringing them home Report, Victoria establishes a Stolen Generations taskforce.

The Aboriginal and Torres Strait Islander Social Justice Commissioner publicly criticises the failure of governments to provide financial and social reparations for members of the Stolen Generation, a national apology, or the appropriate mechanisms for individuals that were forcibly removed to reconnect with their culture.

The Commonwealth Government establishes a memorial to the Stolen Generations at Reconciliation Place in Canberra.
461 ‘Sorry Books’ recording the thoughts of Australians on the unfolding history of the Stolen Generations are inscribed on the Australian Memory of the World Register, part of UNESCO’s programme to protect and promote documentary material with significant historical value.

The National Sorry Day Committee announces that in 2005, Sorry Day will be a ‘National Day of Healing for All Australians’ in an attempt to better engage the non-Indigenous Australian community with the plight of the Stolen Generations.
The Aboriginal and Torres Strait Islander Commission (ATSIC) is dismantled by the Aboriginal and Torres Strait Islander Commission Amendment Act 2005 (Cth) and replaced by a Commonwealth Government appointed advisory board.

Volume two of the Western Australian Aboriginal Child Health Survey is released. The report says that 12.3% of the carers of Indigenous children aged 0–17 in Western Australia were forcibly removed from their families. Compared with other Indigenous children, the children of members of the ‘Stolen Generations’ are twice as likely to have emotional and behavioural problems, to be at high risk for hyperactivity, emotional and conduct disorders, and twice as likely to abuse alcohol and drugs.

The tenth anniversary of the Bringing them home report is recognised around Australia with a number of different events.

The federal government publically apologises to the Aboriginal and Torres Strait Islander people of Australia for the forced removals of their children throughout history.
Response to Government to the National Apology to the Stolen Generations' by Tom Calma – 13 February 2008.

The Federal Parliament opens for the year with a Welcome to Country, for the first time ever.

The Australian Government formally endorses the United Nations Declaration on the Rights of Indigenous Peoples. The Declaration specifically recognises that even though everyone is equally entitled to human rights, Indigenous people have not always enjoyed those rights.

The Expert Panel on Constitutional Recognition of Aboriginal and Torres Strait Islander peoples is established. The Panel’s job is to hear from Australians about the best way to recognise indigenous people in our Constitution.

An Act of Recognition Bill is passed through parliament. The Bill demonstrates the Parliament’s commitment to acknowledging Aboriginal and Torres Strait Islander peoples’ unique and special place in our nation’s history.

The Victorian Government appointed Aboriginal man Andrew Jackomos as Victoria’s first Commissioner for Aboriginal Children and Young People. The appointment of an Aboriginal children’s commission was a result of the Protecting Victoria’s Vulnerable Children’s Inquiry recommentations.

Adnyamathanha man Adam Goodes, an AFL player and community leader, receives the Australian of the Year Award for his “leadership and advocacy in the fight against racism both on the sporting field and within society”

Faith Bandler, a political activist and writer, dies at the age of 96. She was well known for her 10 year campaign leading up to the 1967 Referendum.

For the latest up-to-date information about the status of the recommendations of the report go the Social Justice section of the website at: