Human Rights: On the record: Brochure 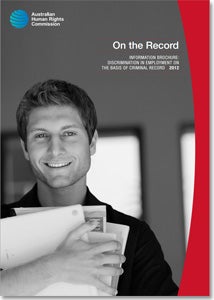 Information brochure: Discrimination in employment on the basis of criminal record

The Australian Human Rights Commission has produced this brochure for people with a criminal record who are seeking work or who are in employment.

What does the Australian Human Rights Commission Act do?

The Australian Human Rights Commission Act (the AHRC Act) provides some protection for a person who has suffered discrimination in employment or occupation on the basis of criminal record.

What is discrimination in employment and occupation under the AHRC Act?

The AHRC Act covers discrimination in employment and occupation. This includes when you have been:

What can I do if someone discriminates against me?

The President of the Commission may discontinue the complaint for a number of reasons, for example if a person’s criminal record is relevant to the job.

What is a criminal record under the AHRC Act?

You can also make a complaint about discrimination because of an ‘imputed’ criminal record. This is when an employer thinks you have a criminal record, even if you do not have one, and treats you unfairly as a result.

Can an employer refuse to employ me because of my criminal record?

For example, fraud convictions may be relevant to a job in financial management.

If you make a complaint of discrimination and the employer claims that the criminal record is relevant to the job, the Commission will investigate the complaint and make a decision on whether the employer’s actions are justified by the inherent requirements exception.

Do I have to tell an employer about my criminal record?

An employer should only ask you to disclose your criminal record if a criminal record is relevant to the particular job. The employer may ask you directly in an interview or job application form, or request your consent to a police check.

Can I be refused a licence or registration?

What other options do I have if I think I have been treated unfairly?

Explain your side of the story to the employer

Sometimes open and honest communication can help resolve misunderstandings between an employer and a person with a criminal record.

Seek review of the decision

In some organisations you can apply for a review of employment decisions. Licensing bodies often have a review mechanism for decisions to reject a licence application or revoke a licence.

If you think you have been unfairly refused employment in the public sector because of your criminal record you may also be able to complain to the state or Commonwealth Ombudsmen.

Tasmania and the Northern Territory have laws that prohibit discrimination on the basis of criminal record, which cover other areas as well as employment.

In WA and the ACT there are laws that prohibit discrimination on the basis of spent convictions. You can make a complaint to the Equal Opportunity Commission of WA or the ACT Human Rights Commission.

There are privacy laws which cover the public sector in most states and territories which may provide you with some protection from breaches of your privacy. Some private sector employers are covered by the Commonwealth Privacy Act 1988 (Cth), although these provisions are limited and generally do not apply to ‘employee records’. Complaints about privacy can be made to the Privacy Commissioner, at the Office of the Australian Information Commissioner. The Privacy Commissioner also accepts complaints of breaches of the Commonwealth spent convictions law.

A conviction must be over ten years old in order to be spent (for an offence committed as an adult) and less for a juvenile offence (three or five years, depending on the law). You need to have committed no further offences since that time. Also, serious offences usually cannot become spent, no matter how long ago they were committed.

There are different Commonwealth, state and territory spent convictions laws, so you need to know which one applies to you. A legal service or the police service may help you find out.

If you think an employer has unlawfully taken your spent conviction into account, you can make a complaint to the body responsible in your state or territory (the police, or an equal opportunity or human rights commission (in WA or ACT) – see contacts below), or at the Commonwealth level (the Office of the Australian Information Commissioner).

If you think you have been unfairly dismissed from employment because of your criminal record, you may be able to make a complaint to state industrial tribunals or Fair Work Australia. However, not all employees are covered by unfair dismissal laws.

Information on criminal record discrimination can be found at http://www.humanrights.gov.au/human_rights/criminalrecord .

Office of the Anti-Discrimination Commissioner (Tasmania)

Fair Work Australia has offices in each capital city and in some regional centres. To locate your nearest office or for a postal address, visit: www.fwa.gov.au/index.cfm?pagename=headercontact