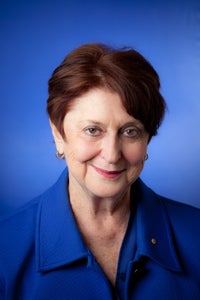 As Social Justice Commissioner, he advocates for the rights of Aboriginal and Torres Strait Islander peoples in Australia and seeks to promote respect and understanding of these rights among the broader Australian community.

Susan has also held a number of positions at the University of New South Wales. She was Pro-chancellor and Council member from 1998, Chair of the UNSW Risk Committee from 2002 and Chair of the Advisory Council FASS UNSW since 2010.

From 1975 to 1988, Susan was Senator for the ACT, becoming the first woman to hold a Cabinet post in a federal Labor Government. She served in senior portfolios in the Hawke Government as Minister for Education and Youth Affairs, Minister Assisting the Prime Minister on the Status of Women and Special Minister of State. As Education Minister, Susan saw school retention rates double and universities and TAFEs grow significantly without the charging of tuition fees. She also pioneered extensive anti-discrimination and equal opportunity legislation, including the landmark Sex Discrimination Act 1984 and the Affirmative Action Act 1986.

In 1990, Susan was appointed Officer of the Order of Australia for her contribution to Parliament.

She published her autobiography, Catching the Waves, in 1999 and has been a frequent media commentator on her areas of expertise.