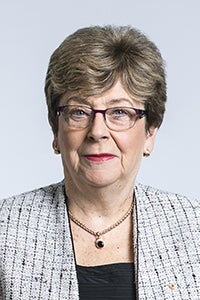 Dr Patterson began her role as the Age Discrimination Commissioner on 29th July, 2016. She has demonstrated a strong interest in issues affecting older people throughout her professional life.  Leaving school at 15 and then managing a small business, she returned to school and gained a BA (Hons) at the University of Sydney and a PhD in Psychology and Dip Ed at Monash University.  She taught allied health science students for 11 years.  She studied gerontology at two universities in the USA and used the knowledge gained during those visits to co-develop the first Victorian post-graduate diploma in gerontology and to introduce gerontology into the undergraduate behavioural science courses.

Following her election to the Senate in 1987 she served on a number of Senate committees and held various shadow portfolios.  In 1988 she was appointed a Parliamentary Secretary and in 2001 was appointed to Cabinet and served in the Health and Social Security portfolios.  During her time in the Senate one of her major areas of interest were issues affecting older Australians.   She retired from Cabinet in 2006 and from the Senate in 2008.

Initially, in her new role, her focus will be on the rights of older workers, the blight of elder abuse and the need to encourage innovative solutions to homelessness and risk of homelessness amongst older Australians.

She has been a Director and Vice President of Interplast Australian New Zealand, a leader and Council and Executive Member of Girl Guides Victoria and was a member of Monash University Council for 20 years.  She was appointed as an Officer of the Order of Australia in 2016.