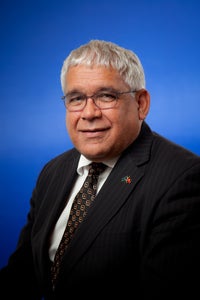 Mick Gooda resigned from the Australian Human Rights Commission effective 1 August 2016 to take up a position as Royal Commissioner for the Royal Commission into the Child Protection and Youth Detention Systems of the Northern Territory.

As Social Justice Commissioner, he advocates for the rights of Aboriginal and Torres Strait Islander peoples in Australia and seeks to promote respect and understanding of these rights among the broader Australian community.

Mick is particularly passionate about closing the health gap between Indigenous and non-Indigenous Australians, a move he says is “non-negotiable”.

His focus has been on the empowerment of Aboriginal and Torres Strait Islander peoples. Immediately prior to taking up the position of Social Justice Commissioner, Mick was the Chief Executive Officer of the Cooperative Research Centre for Aboriginal Health for close to five and a half years. Here, he drove a research agenda which placed Aboriginal and Torres Strait Islander people ‘front and centre’ in the research agenda, working alongside world leading researchers.

Mick is a proud Gangulu person from Central Queensland and in his spare time, can usually be found in the Sunshine State.