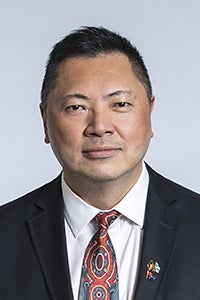 Prior to joining the Commission, Chin spent three years as the Director for Multicultural Engagement at the Swinburne University of Technology in Melbourne.

His leadership role resulted in Swinburne on 23 November 2017 being conferred a High Commendation award by the Victorian Government under the Victorian Multicultural Excellence Awards 2017 – Business category.

Chin was the Chairperson and Statutory Head of the Victorian Multicultural Commission from 2011 to 2015. The Commission is an independent statutory authority with responsibilities to support and promote the benefits of Victoria's cultural diversity.

Previously, he enjoyed a successful career of more than twenty-four years as a practising lawyer that included partner roles at a number of Melbourne firms.

Chin was the Co-Chair of the Police and Community Multicultural Advisory Committee and served in many other organisations and bodies. This included the Chamber of Commerce, the Australian Football League's Multicultural Focus Group, professional and business associations and Local Council committees.

He was until recently a member of La Trobe University's Asia Advisory Board and has had either led or been a member of many other community organisations. Chin was also the President of the Chinese Community Council Australia (Vic) 2016-2017.