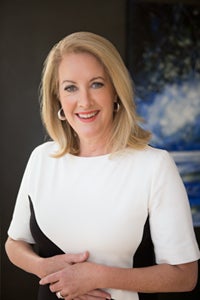 During her term, she has been committed to improving gender equality through her advocacy in preventing violence against women and sexual harassment, improving lifetime economic security for women, balancing paid work and unpaid caring responsibilities, promoting women’s representation in leadership and strengthening gender equality laws and agencies.

Elizabeth has been a key advocate for Australia’s national paid parental leave scheme and domestic violence reform. She has championed the changes to the ASX Corporate Governance Principles to increase the number of women at decision making level.  She has developed the Male Champions of Change strategy.

In April 2011, the Government appointed Elizabeth, as Australia’s Sex Discrimination Commissioner, to lead the Commission’s Review into the Treatment of Women in the Australian Defence Force. Four reports on the Review were tabled in Australia’s Parliament and the Review concluded in March 2014.  Elizabeth now leads the Commission’s collaborative work with the Australian Defence Force on embedding cultural change across Navy, Army and Air Force.

Elizabeth is Global Co-Chair of the Women’s Empowerment Principles Leadership Group, a joint initiative of the UN Global Compact and UN Women; a member of the World Bank’s Advisory Council on Gender and Development; Partner Co-Director with NATO on Women, Peace and Security; and a member of the Australian Defence Force Gender Equality Advisory Board. Elizabeth is an Ambassador for the Foundation to Prevent Violence Against Women and their Children and the overall winner of the 100 Women of Influence Awards for 2014 and is a recipient of two honorary doctorates of laws, one from the University of Sydney and one from the University of Technology.

Prior to her appointment, Elizabeth was a partner and board member at law firm Blake Dawson (now Ashurst).

Elizabeth is married and has two teenage children.