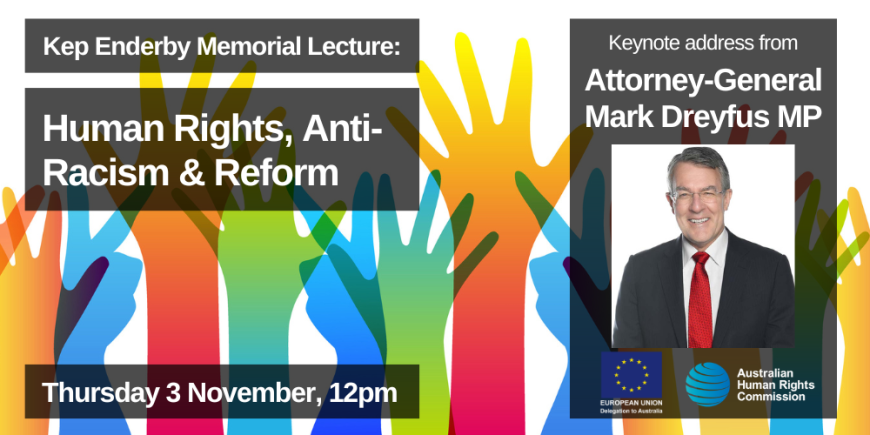 Show on map
Register here for your free ticket

You're invited to attend the Kep Enderby Memorial Lecture:

Join hundreds of people around the country for the prestigious Kep Enderby Memorial Lecture. Delivered by The Hon Mark Dreyfus KC MP, the Attorney-General of Australia, this year’s event is one of the first public opportunities to hear the new Government’s agenda for human rights policy implementation and reform.

The lecture will be followed by a panel discussion to reflect on online hate and the need for legislative reform.

This is a FREE online event with up to 1000 participants expected to attend.

We stand at an important moment in our nation’s development. The challenges we face to maintain a peaceful, harmonious, multicultural society are many. To ensure a country free of racial discrimination in which everyone has every chance to fully participate in society, we need to move from a space of ‘safe’ to ‘brave’ on issues affecting those who experience discrimination.

This lecture is an opportunity to hear from the Attorney-General on the Australian Government’s vision to advance human rights. The AG will speak to the Government’s commitments on:

The Kep Enderby Memorial Lecture is an annual public event held by the Australian Human Rights Commission to honour the memory of the Hon. Kep Enderby QC (1926-2015). As Attorney-General, Kep Enderby introduced into Parliament the Bill which would become the Racial Discrimination Act 1975 (Cth). Each year, the Memorial Lecture advances public understanding and debate about the Racial Discrimination Act, racism and human rights.

The lecture, sponsored by the EU Delegation to Australia and introduced by the EU Ambassador Designate to Australia, Mr Gabriele Visentin,  will be delivered online via Zoom.

If you have any accessibility requirements, please contact us.

The deadline for registrations is: Thursday 3 November 2022.

The Australian Human Rights Commission is pleased to announce that Jeremy Fernandez will be the MC and panel facilitator for this event.

Jeremy Fernandez is a journalist, producer and presenter specialising in live events and multi-platform news coverage with the Australian Broadcasting Corporation. He has anchored and reported in the field for some of the network’s most complex broadcasts over two decades including coverage of The Northern Rivers floods - 2022, the Black Summer bushfires, Australia’s Covid-19 pandemic response, and The Australian Of The Year Awards. Jeremy regularly appears on ABC television and streaming services, including the News Channel, and NSW 7PM News. He has also served community and charitable organisations including Sydney World Pride, The Top Blokes Foundation, Mindframe, Suicide Prevention Australia, ACON, Room To Read, Dress for Success, and the United Nations Association of Australia.

The Hon Mark Dreyfus KC MP was appointed Attorney-General of the Commonwealth of Australia on 1 June 2022. Mark is a passionate defender of the rule of law, freedom of the press and the need for a powerful and independent National Anti Corruption Commission. Mark is a strong advocate for social justice and believes in creating a sustainable economy and environment for future generations. Mark was first elected to the House of Representatives as the Member for Isaacs in November 2007. In 2010 Mark was appointed as Cabinet Secretary and Parliamentary Secretary for Climate Change and Energy Efficiency and in February 2013, Attorney-General and Minister for Emergency Management. Prior to entering Parliament Mark was a Melbourne barrister and was appointed Queen's Counsel in 1999. He appeared for and advised Federal, State and local governments and appeared in a number of landmark cases in the High Court, including the Stolen Generations litigation.

Following the Attorney-General’s lecture, several leading experts will form a panel to discuss online hate and the need for legislative and other reforms. They will include: