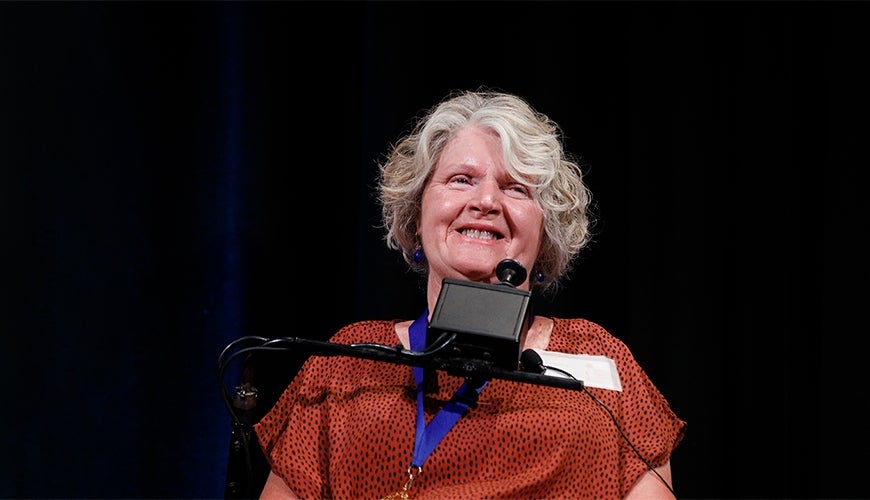 Rosemary Kayess has won the prestigious 2019 Human Rights Medal in recognition of her work in international human rights law for people with disability.

Ms Kayess, a leading human rights advocate for people with disability in Australia and worldwide, contributed to drafting the United Nations Convention on the Rights of Persons with Disabilities and successfully lobbied for its ratification in Australia.

“The fact that I've been awarded this medal amongst all these other nominees just gob-smacks me,” said Rosemary Kayess.

“I did an interview recently and I was asked to name a song from the year that made me - and I suggested 2003 which was when I started working on the UN Convention on the Rights of Persons with Disabilities.

“The Human Rights Medal is awarded to an individual who has made an outstanding contribution to the promotion and protection of human rights in Australia,” said Commission President Emeritus Professor Rosalind Croucher AM.

“Rosemary Kayess’ lifelong advocacy for equal rights for people with disability has made the world a better place for so many people in Australia and across the world.”

The winners in all nine categories of the Australian Human Rights Commission’s annual Human Rights Awards were announced today at a ceremony at Sydney’s Fullerton Hotel.

The Human Rights Awards acknowledge and celebrate the work done in our communities by ordinary Australians, organisations, businesses and community groups to further human rights and freedoms in Australia.

The winners in all nine categories of the 2019 Human Rights Awards are:

Receiving her award, Young People’s Human Rights Medal Winner Vanessa Turnbull Roberts said, “The system does not work for our kids who are incarcerated - my mind and my spirit can't help but think of those young people that aren't here right now.

“I ask that every single person assess your privilege and show up on the front line. We need to amplify those voices and we need to raise those voices.”

The full list of finalists is available at http://hrawards.humanrights.gov.au