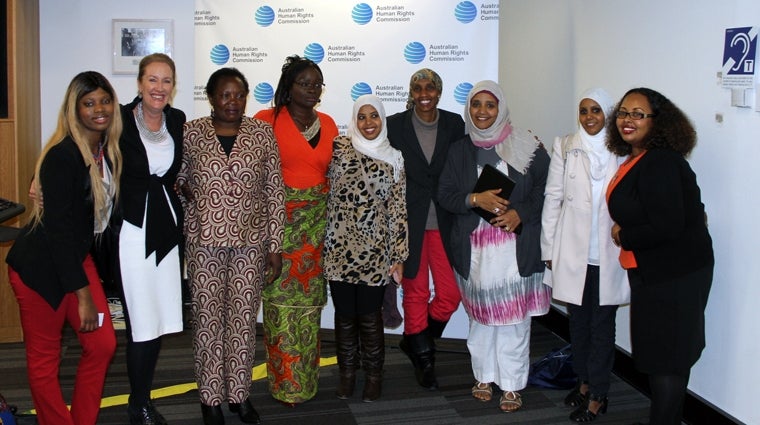 Successfully addressing the issue of female genital mutilation in Africa not only requires use of the term African communities use in relation to it – female circumcision – but a holistic approach that recognises the social, psychological and economic structures and outcomes associated with the practice. Like any issue of women's rights and gender equality worldwide, it requires women's leadership to take centre stage and that the issues be discussed in women's voices.

In the latest of the Commission's Rights Talk series held at our offices in Sydney, Commissioner Broderick hosted African Women's Voices, a panel about African women's issues and rights, female genital mutilation and the role of women's leadership in African communities.

The panel consisted of special guests who have lived experience of dealing with these issues ‘on the ground' in Africa and Australia. Juliana Nkrumah, Founder Advisor of African Women Australia, Mabel Imali Isolio, Gender Consultant based in Nairobi, Kenya, as well as Marian Issa and Khadija Gbla, two graduates from the ‘Our Voices: Filling in the Gap – FGM Spokesperson's program at South Western Sydney Institute of TAFE, Granville NSW were panelists.

In explaining her experience working in African Australian communities on issues such and domestic violence and female circumcision, Ms Nkrumah explained that the issue of ownership was central to the debate and to that end, the use of language was of paramount importance if real results were to be achieved. “It's our body and our voice says it is female circumcision ... it's about the respect we want you to give to us ... the language that the people in our communities understand,” she said. To that end, at the Our Bodies Our Voices Our Lives Conference, African Women Australia would be releasing a Code of Conduct for dealing with female circumcision.

Visiting Australia from Kenya for the first time, Mabel Imali Isolio expanded this point, observing that the word mutilation was “extremely negative”, an additional burden on top of a practice that often leads to or is supported by negative life outcomes such as homelessness, alcoholism and violence – physical, psychological and economic violence.

Personal perspectives were supplied by the two graduates from the Our Voices: Filling in the Gap program who said that speaking out was a powerful and imperative step in grieving, healing, educating and in prevention.

In thanking the women for taking the time to come and speak at Rights Talks, Commissioner Broderick said that speaking out, conversation and discussion were vital, saying “If we can't talk about it, we can't change it.”

The four women speakers were going on to attend the ‘Our Bodies, Our Voices, Our Lives Conference – FGM Program' organised by African Women Australia in partnership with Social and Community Services Section, South Western Sydney Institute of TAFE, Granville College, on 30 May 2014, at Granville TAFE, Sydney.

A video recording of the talk is available at www.youtube.com/watch?v=t1CUqPC_pYE&list=UUUXdwdj5er652RaIg8EsU8g

The Commission's next Rights Talk on Monday 16 June, entitled ‘Balancing the scales of justice', will be presented by Disability Discrimination Commissioner, Graeme Innes. It concerns access to justice for people with disability. For more details: rightstalk.humanrights.gov.au/