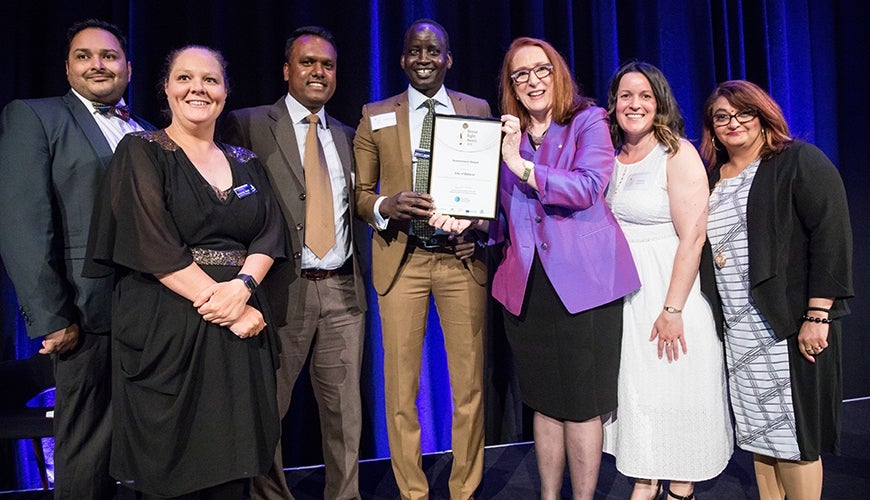 The wait is over! We are thrilled to announce the finalists for the Business Award, Media Award, and Human Rights Medal categories.

These fourteen finalists, chosen from hundreds of nominations, have worked tirelessly to promote human rights in a range of areas, including access to justice, refugee and disability rights.

We cannot wait to highlight their outstanding work at the 2019 Human Rights Awards and ensure their fight for justice and equality does not go unnoticed.

Read on for our finalists:

This series of stories across ABC TV, Radio and Online, including two Four Corners programs, exposed widespread abuse, neglect and inhumane treatment of people living in aged care facilities. These revelations started a conversation about age and disability rights as the Royal Commission into Aged Care Quality and Safety was announced.

Inside the Watch House

This Four Corners program revealed the detention of children, some as young as ten, in high-security adult watch houses in Queensland. After the program was aired, the Queensland Government investigated the issue and established a new Youth Justice Department. All children were moved out of Brisbane watch houses and placed in youth detention centres.

See What You Made Me Do

Jess Hill’s forensic, thought-provoking investigation into domestic violence reveals the social and legal barriers to access to justice and support for victims. See What You Made Me Do holds perpetrators to account alongside the institutions that enable them, advancing the national conversation on domestic abuse and keeping this important issue in the spotlight.

The interview which uncovered an alleged torturer

In February 2019, Adriana Rivas, a former Chilean intelligence agent was arrested in Bondi.  She’s accused of aggravated kidnapping of seven dissidents in the 1970s. The arrest follows Florencia Melgar’s investigation on Australia‘s involvement in Pinochet’s coup and an extensive interview with Rivas, where she self-incriminates of escaping Chile to hide in Australia. Melgar has been investigating human rights violations for more than 20 years.

The Australian Council of Superannuation Investors (ACSI) works with ASX300 companies to improve their environmental, social and governance performance. Their work includes research and raising awareness on modern slavery, workplace safety and domestic violence, advocating for increased representation of women on the boards of ASX300 companies, and addressing wage fraud in franchise companies.

Developed in partnership with Settlement Services International, the Commonwealth Bank’s Financial Literacy Toolkit is designed to help newly arrived refugees become financially independent and safe from risks that are detrimental to their financial stability. It provides information about spending, budgeting and paying bills and includes a guide for case managers to support this program.

Professional Footballers Australia (PFA) was involved in the successful campaign to secure Bahraini refugee Hakeem al-Araibi’s release from detention in Thailand at the beginning of this year. They also advocate for pay equity for female footballers. Having achieved this at the national representative level, they are now seeking equal World Cup Prize Money for women.

STREAT is a Melbourne-based social enterprise tackling youth homelessness and disadvantage by providing a supported pathway into the hospitality industry. Their cafes provide training and work experience for young people in need while generating revenue to support their other initiatives, including hospitality short courses, a Certificate II program, and a creative arts program.

Brisbane-based lawyer Aimee McVeigh founded and led the campaign for Queensland to introduce a Human Rights Act from 2015 until its successful passage in March this year. The legislation provides some of the strongest protections for human rights in Australia. Aimee marshalled over 40 community organisations and legal centres in support of the campaign, which involved submissions to government, coordinated lobbying and media appearances.

Former Socceroo, broadcaster and well known football personality, Craig Foster led the successful campaign supporting Bahraini refugee Hakeem al-Araibi’s release from Thai detention at the beginning of this year. He travelled across the world — to Thailand, where al-Araibi faced extradition to Bahrain, to Geneva, Amsterdam and FIFA in Zurich — lobbying for his release. Foster is also a refugee and human rights ambassador with Amnesty and Human Rights Watch and is involved in both refugee and indigenous children’s sport programs.

Richard Boele has promoted human rights in various capacities for over 30 years. He has worked with the Amnesty International Business and Human Rights group, the Australia Tibet Council, and the Unrepresented Nations and Peoples Organisation (UNPO). Recently, he has worked as a human rights business consultant at his own firm, Banarra, and is now at KPMG, where he aims to make corporate responsibility for human rights the norm.

Rosemary Kayess is a leading disability rights activist, academic, and lawyer. She contributed to drafting the United Nations Convention on the Rights of Persons with Disabilities and successfully lobbied for its ratification in Australia. She teaches international human rights law and publishes extensively on international human rights for people with disability. She is currently Vice Chair of the UN Committee on the Rights of Persons with Disabilities.