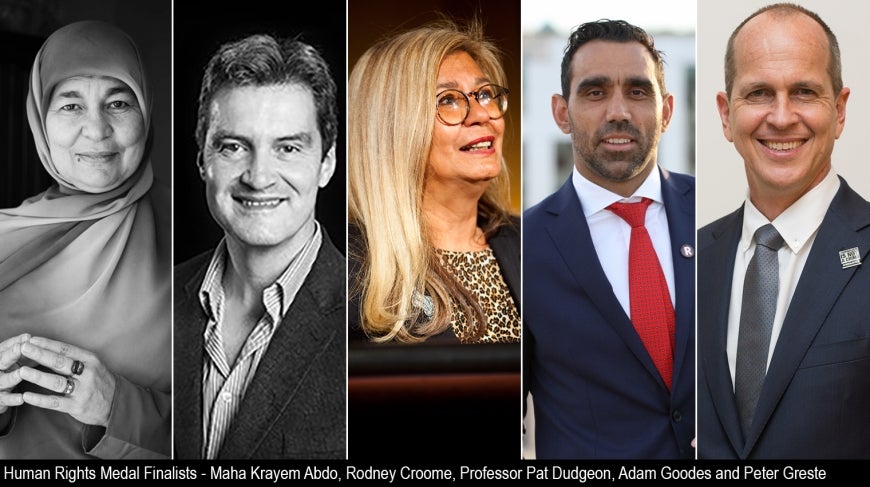 Professor Pat Dudgeon, who was the first Aboriginal psychologist to graduate in Australia and is one of the first Mental Health Commissioners in the country is also on the shortlist for the 2015 Human Rights Medal.

Former Australian of the year and tireless anti-racism campaigner, Adam Goodes, together with journalist and freedom of speech advocate, Peter Greste, complete the list.

“These five outstanding Australians have come from different walks of life but they share a commitment to freedom, justice and equality,” Professor Triggs said.

The leadership provided by Maha Krayem Abdo has seen the Muslim Women's Association become a peak representative body for Muslim women in Australia.

Professor Triggs congratulated Professor Dudgeon on her dedication to improving the mental health and wellbeing of Aboriginal and Torres Strait Islander peoples.

Professor Triggs said the inclusion of Adam Goodes on the Human Rights Medal shortlist acknowledges the positive influence Mr Goodes continues to have in the lives of a great many Australians.

“We know Mr Goodes as an outstanding footballer and as a former Australian of the Year,” Professor Triggs said.

“But we also know Mr Goodes as a proud Indigenous man with the courage to speak out against racism and to actively strive towards building a better place for all Australians.”

Professor Triggs said she was delighted to see the fifth and final shortlisted candidate, Peter Greste, acknowledged for his commitment to free speech.

“Journalists must be free to report news and criticise governments without fear of punishment,” Professor Triggs said.

“After his release from prison in Egypt, where he was imprisoned for allegedly spreading false news, Mr Greste campaigned tirelessly for the release of his colleagues, and campaigned for freedom of speech as a cornerstone of democratic societies.

“We honour not only these five shortlisted Australians, but all of the people and organisations nominated for this year’s human rights awards,” Professor Triggs said.

“The record number of nominations we received for these awards highlights the wide-ranging support for human rights that exists at all levels of the community.”

The Human Rights Commission will present the annual Human Rights Awards on 10 December at a lunch at the Westin Hotel in Sydney.

Professor Triggs will deliver a keynote speech on the future of Human Rights in Australia.

Here are some biographical details of the Human Rights Medal finalists:

Maha Krayem Abdo
For over 25 years, Maha Krayem Abdo has helped empower women and youth from culturally and linguistically diverse backgrounds. Under her leadership, the Muslim Women's Association (MWA) has become the peak representative body of Muslim women in Australia, and assists individuals escaping domestic or family violence. Maha's outstanding service in regards to social inclusion and human rights were recognised in 2008 when she was awarded the honourable Medal of the Order of Australia. She is also the 2014 NSW Human Rights Ambassador.

Rodney Croome
Rodney has devoted his life to the rights of lesbians, gays, bisexual and trans* (LGBT) people. He led the successful campaign to decriminalise homosexuality in Tasmania, and his lobbying and advocacy skills were crucial to the passage of Tasmania’s anti-discrimination law. He has played an important role in the development of Tasmania’s LGBTI policies and programs in education, health and policing. Rodney is the national director of Australian Marriage Equality.

Professor Pat Dudgeon
Professor Pat Dudgeon has made a significant contribution to promoting and enhancing the mental health and human rights of Indigenous Australians. She is from the Bardi people of the Kimberley area in Western Australia and was the first Aboriginal psychologist to graduate in Australia. She has conducted exemplary research aimed at improving outcomes for Indigenous Australians and is one of the first Mental Health Commissioners in Australia. Professor Dudgeon is the project leader of the National Empowerment Project, an Indigenous suicide prevention project working with 11 Aboriginal communities across the country.

Adam Goodes
Adam Goodes is well-known for his outstanding sporting performances and for his advocacy in the fight against racism. Adam was named the 2014 Australian of the Year in recognition for his off-field performances. In 2004 he joined the National Indigenous Council, and in 2009, Adam set up the Goodes-O'Loughlin Foundation with fellow indigenous teammate Michael O'Loughlin to create a brighter future for disadvantaged Indigenous children. Adam is a proud Indigenous man with the courage to speak out and actively strive towards building a better place for all Australians.

Peter Greste
Peter Greste spent 400 days in an Egyptian jail after being arrested in Cairo and charged for terrorism-related offences in 2013/14. The trial was widely publicised and also criticised around the world for the lack of evidence and the political issues that surrounded the case. Following his release, Peter used this case as a platform to advocate for freedom of speech and a free media. He has made numerous public appearances and spoken about the importance of a free and unencumbered media in properly functioning democracies.