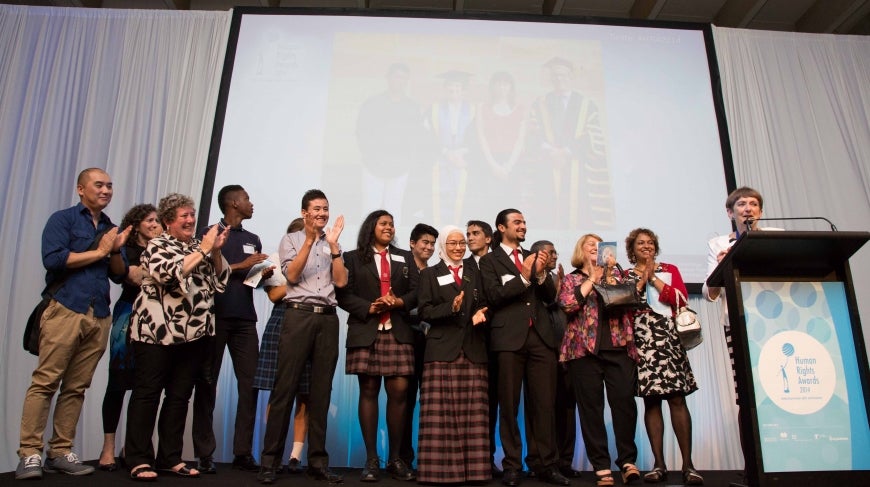 A Sydney high school principal, Dorothy Hoddinott AO, has won the 2014 Human Rights Medal in recognition of her lifelong passion for and commitment to education, particularly for disadvantaged and refugee students, many of whom have experienced unimaginable trauma.

Ms Hoddinott is the principal of Holroyd High School, in Greystanes, Western Sydney.

“I am a teacher. For the greater part of my career, I have taught in schools on the other side of the tracks, working with disadvantaged students, particularly students from immigrant and refugee communities.

“Almost sixty per cent of our students are of recent refugee background, many with interrupted or no schooling before they come to us, and most with experience of trauma that would be unimaginable in the mainstream Australian community.

“I have learned a lot on my almost fifty year journey in teaching: that birth, social class, wealth, ethnicity and gender should not define or limit your future; that all children can learn; that all children, regardless of their background and family circumstances, deserve a sound education that respects them and provides them with the firm foundation they need for the rest of their lives as active participants in society.”

The Human Rights Commission president, Professor Gillian Triggs, described Ms Hoddinott’s contributions to the well-being of her students as life-changing.

“Dorothy’s success at Holroyd High provides a very practical model for teachers and schools across the country as they work with students from refugee and disadvantaged backgrounds.

“Dorothy has shown us how to help these students, how we can give them hope, give them education opportunities, and help refugee and disadvantaged students become hard-working, motivated and resilient Australian citizens.”

Professor Triggs paid tribute to all of the winners and finalists for the 2014 Human Rights Awards, presented on December 10 at a self-funded awards ceremony at the Museum of Contemporary Art in Sydney. Read Professor Triggs' speech.

The Young People’s Human Rights Medal went to Daniel Haile-Michael and Maki Issa, who were the lead applicants in a historic Federal Court case that successfully challenged racism and racial profiling within the Victorian police force.

The Human Rights Law Award went to Darren Fittler from Gilbert + Tobin, in recognition of his commitment to and support for the charity, philanthropic and not-for-profit sectors. Mr Fittler leads the Third Sector Advisory Group at Gilbert + Tobin and is a member of the Disability Advisory Council for the NSW Department of Justice.

Other 2014 Human Rights Awards winners are as follows: