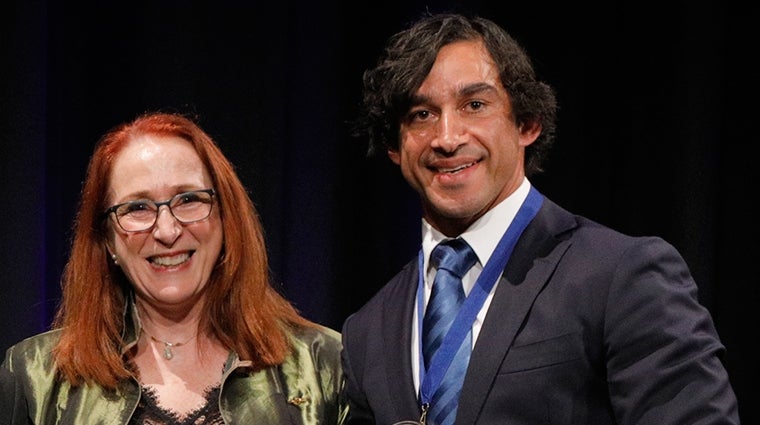 “Johnathan Thurston is a superstar in the National Rugby League. He is also a role model to thousands of young Australians and a mentor to Indigenous students.

Mr Thurston is a key supporter of NRL Cowboys House, which provides mentoring and accommodation for students from remote Queensland communities. He is also active in Deadly Kindies, a kindergarten program that supports and strengthens children’s Aboriginal and Torres Strait Islanders identity.

"It is truly humbling to receive this medal," Mr Thurston said.

“I am fortunate to be in a position to work with Indigenous youth from early childhood through to young adulthood, and believe it is my responsibility to ensure our future generations have equal access and opportunity to live their best lives.

“While I am only one person in a community of leaders, entrepreneurs and innovators who are working to create better lives for Indigenous Australians, I am honoured to be recognised and can only hope that the award will bring valuable attention to closing the education gap for all Australians.”

The 2017 Human Rights Awards winners are:

Human Rights Medal: Johnathan Thurston
NRL star Johnathan Thurston was recently named the 2018 Queensland Australian of the Year. Johnathan is a role model and mentor and is involved in a multitude of community programs including NRL Cowboys House, which provides support and accommodation for Indigenous students from remote Queensland communities.

Young People’s Human Rights Medal: Georgie Stone
Georgie is a transgender advocate who, at the age of 10, became the youngest person to receive hormone blockers in Australia. She campaigned to allow transgender children and their families access to treatment without Family Court approval.

Media Award: The Messenger and They Cannot Take the Sky, produced by Behind the Wire (with The Wheeler Centre and Allen & Unwin)
The Messenger podcast and They Cannot Take the Sky: Stories from Detention share the stories of people who have been held in immigration detention or subject to third country processing in Nauru and Manus Island. They provide a compelling insight into the impact of Australia’s refugee policies.

Law Award: David Woodroffe
David Woodroffe has made a significant contribution to the promotion of human rights for Aboriginal people in the Northern Territory. He is the Principal Legal Officer for the North Australian Aboriginal Justice Agency and has worked with the Royal Commission into the Protection and Detention of Children in the Northern Territory to ensure that Aboriginal people have the opportunity to participate fully in the Commission.

Tony Fitzgerald Memorial Community Individual Award: Barbara Spriggs
Barbara Spriggs exposed a decade-long culture of cover-up of the abuse and maltreatment of residents at the Oakden facility when she sought answers about suspected abuse and neglect of her husband while he was in care in 2015 and 2016.

Racism. It Stops With Me Award: Cohealth Arts Generator Sisters and Brothers Program National Ethnic and Multicultural Broadcasters Council
This program tackles racism in Victoria, using a school leadership and vocational program focused on building empathy through discussions about diversity and racial discrimination. By encouraging bystanders to take action when they witness racism, students also learn to build confidence and resilience.