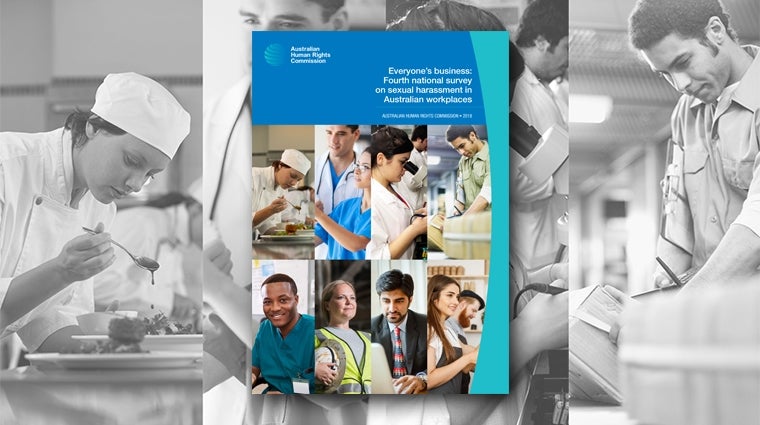 The Sex Discrimination Commissioner Kate Jenkins will release new figures today that confirm people have told the Commission that sexual harassment is widespread and pervasive and has increased significantly from the last survey six years ago.

“Sexual harassment is a problem that affects millions of Australians, particularly in our workplaces. One in three people (33%) surveyed told us they have been sexually harassed at work in the last five years.

“The survey results highlight that this is an issue that affects both women and men. Almost two in five women (39%) and just over one in four men (26%) told us that they have been sexually harassed at work in the past five years.

“These figures are unacceptable and have increased significantly since the last survey in 2012, which found one in five (21%) people told us they had experienced sexual harassment in the workplace in the previous five year period.

“Worryingly, people aged 18 to 29 were more likely than those in any other age groups to tell us they have experienced workplace sexual harassment in the past five years (45%).

“The findings are more timely and relevant today than ever before, with the huge surge in public concern about sexual harassment generated by the #MeToo movement and the willingness of people to say that, they too, have been affected,” Commissioner Jenkins said.

For the first time, the survey results provide industry specific data, with reports of experiences of workplace sexual harassment notably high in the information, media and telecommunications industry (81% of employees in this industry in the last five years), in the arts and recreation services (49%), and electricity, gas, water and waste services (47%) and the retail trade sector (42%).

Commissioner Jenkins said the results reveal that formal reporting of workplace sexual harassment continues to be low, with fewer than one in five people (17%) making a report or complaint.

“We know from our research that many people are afraid to report their experiences of unwelcome sexual conduct out of fear that they won’t be believed, that it’s not worth it, that they’ll be ostracised and that it could damage their career.

“It’s also worrying that almost half of those who did make a formal report said that nothing changed at their organisation, as a result of the complaint.

“Unwelcome sexual conduct on this scale in the workplace not only causes distress to workers and colleagues, it impacts workplace productivity and impedes career progression, which has an economic impact on businesses and families,” Commissioner Jenkins said.

The survey results will inform the Australian Human Rights Commission’s National Inquiry into sexual harassment in Australian workplaces, which will begin public consultations later this month.

“Our world first inquiry is already accepting submissions and we’re hoping to hear from individuals and organisations across the country about their experiences and ideas for change. The inquiry will report in the second half of 2019.

“We encourage all workplaces to examine the results for their industry, and review the effectiveness of their current sexual harassment prevention initiatives.

“I genuinely believe there is a desire for change and an unprecedented appetite for solutions. Our goal must be to ensure all Australians work in an environment that is safe, productive and free from sexual harassment,” Commissioner Jenkins said.

Everyone’s business: Fourth national survey on sexual harassment in Australian workplaces will be available at www.humanrights.gov.au at 12.30pm today