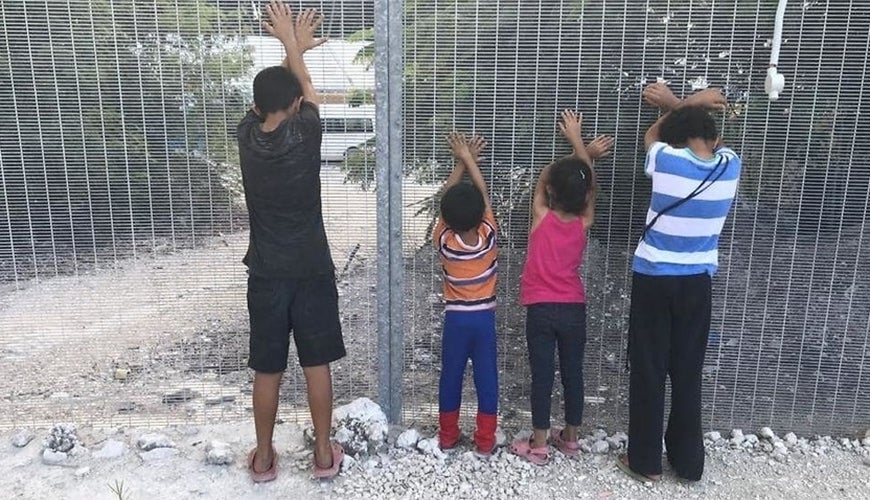 The practice of sending to Nauru families with young children who arrived in Australia seeking asylum is the subject of an inquiry report by the Australian Human Rights Commission tabled in Parliament today.[1]

Mr Richard Lancaster SC, as delegate of the President, found that the regional processing centre on Nauru was not an appropriate place to send families with young children.

Commission President Rosalind Croucher said: “This report makes for disturbing reading.  The conditions in which families were detained on Nauru posed grave risks to their physical and mental health.”

The report found that the accommodation of families in vinyl marquees on the phosphate plateau of central Nauru failed to provide them with sufficient protection from heat, rain and risk of serious disease, including dengue fever.  Some families had been transferred to Nauru during a dengue fever epidemic.

While the focus of the inquiry was on the families compound at the regional processing centre, single adult women were also transferred to Nauru and faced similar conditions.

“As Australia had effective control over the day-to-day operation of the centre, the conditions in the centre were the responsibility of the Australian Government” said President Croucher. “The Government should not have transferred people to Nauru while it knew that these risks existed.”

The report also found serious breaches of the human rights of a pregnant woman who needed a medical transfer to Australia due to a complicated pregnancy.  Her transfer was delayed until she was almost 35 weeks pregnant, contrary to departmental policy and the advice of treating doctors.

This inquiry commenced almost 5 years ago in response to complaints by three families with children under six years old who had been transferred to Nauru.  In his report,

Mr Lancaster expressed his concern at the time taken by the Department of Home Affairs to respond to these complaints, which caused significant delays to the inquiry process.

A copy of the report is available on the Commission’s website.

In relation to the conditions of detention at the regional processing centre, Mr Lancaster found that:

Each family was detained at the regional processing centre on Nauru for a period of between 9 and 18 months.  One family was resettled in Nauru.  Two families were returned to Australia for medical treatment and are still in Australia.

Mr Lancaster made specific findings about the treatment of those families.

Significantly, he found that a delay in transferring a woman known as Ms BK from Nauru to Australia to give birth until she was almost 35 weeks pregnant was in breach of her human rights.  This delay was contrary to the advice of Ms BK’s treating doctors who had recommended an urgent transfer to Australia because she had a complicated pregnancy.  The Nauru Hospital was not equipped to handle complicated pregnancies.  The delay was also contrary to the Department’s then policy of transferring women before they were 28 weeks pregnant.  The delay contributed to Ms BK developing a psychiatric illness.

Mr Lancaster also made findings about the decision-making process for taking asylum seekers to Nauru.

Among other things, he found that the ‘best interests assessments’ for children failed to take the best interests of children into account as a primary consideration.

Instead, a process was adopted by the Department that it knew was inconsistent with the Convention on the Rights of Child.  This process was based on an inflexible policy of sending asylum seeker families to Nauru, regardless of whether this was in the best interests of children.

Mr Lancaster made 11 recommendations about the position of the complaints, regional processing, medical transfers and best interests assessments for children.

This included recommendations that:

Jurisdiction to conduct the inquiry

Prior to reporting on the conditions of detention, and at the request of the Commonwealth, Mr Lancaster conducted a preliminary inquiry into the jurisdiction of the Commission to receive complaints from people on Nauru.  He reported his findings on jurisdiction in November 2016 and a copy of these findings are at Annexure C to the report.

Mr Lancaster found that Australia has human rights obligations outside of its territory when it is exercising ‘effective control’ over people or territory.  On the basis of a detailed assessment of the operation of the regional processing centre on Nauru, he found that Australia was exercising effective control over the day to day operation of the centre.  As a result, the Commission had jurisdiction to conduct an inquiry into complaints of breaches of human rights at the centre.

[1] Ms BK, Ms CO and Mr DE on behalf of themselves and their families v Commonwealth of Australia (Department of Home Affairs) [2018] AusHRC 128.