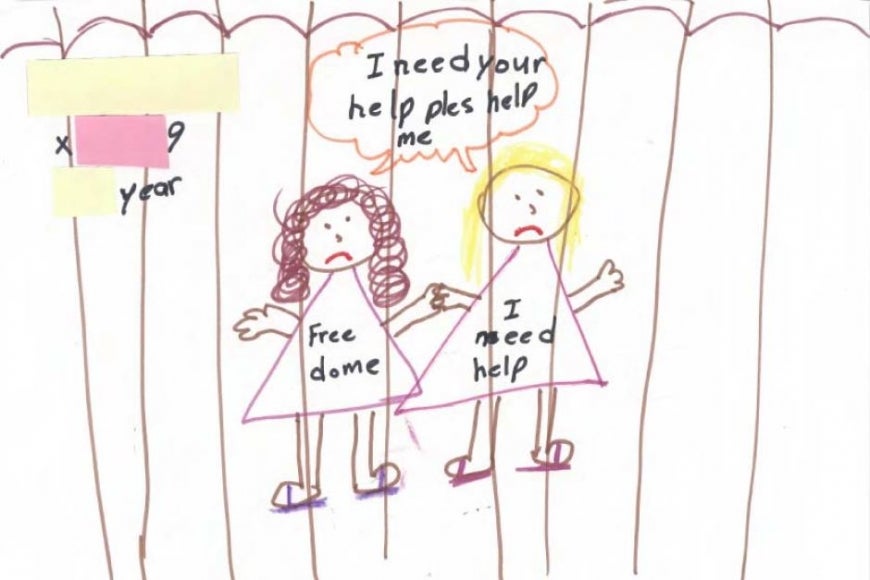 Photo: A drawing by a child in the Christmas Island detention centre in 2014. (Supplied: Australian Human Rights Commission)

Asylum seeker children and their families in detention on Christmas Island are plagued by despair and helplessness - and the situation is only deteriorating, writes Gillian Triggs.

A team from the Australian Human Rights Commission has just returned from Christmas Island where we met extremely distressed mothers and children - including a number of young mothers on 24-hour suicide watch.

We were accompanied by internationally respected paediatrician Professor Elizabeth Elliott. We found that in the four months since the Commission last visited Christmas Island, the situation for asylum seekers has significantly deteriorated.

Commission staff arrived on Christmas Island on July 14, at a time when there were 13 women on high-level risk monitoring, with 10 of these women requiring 24-hour watch. Women on 24-hour watch are monitored by a guard who sits outside their room with the door open. Women are observed at all times, including when they breastfeed and sleep.

The numbers of women on 24-hour watch constitute a spike in serious cases of self-harm or suicide attempts - a fact that the Commission has only been able to confirm by visiting Christmas Island and speaking with the asylum seekers and staff there.

Previously, the numbers of people on suicide watch was one or two per week, but tensions have been high in the Christmas Island detention camps since July 7, when mothers of babies called a meeting to ask immigration staff if they could be moved to mainland detention.

The mothers were concerned that there are no places for babies to learn to crawl or walk in the 3x3 metal containers where they are confined in the extreme heat. These rooms contain a bunk bed and a cot and this leaves only one square metre of space.

Professor Elliott was extremely concerned at the state of the children. She says that most were ill with chest or gut infections - reflecting the large number of families living in unacceptably cramped and high density accommodation intended for 'temporary' use.

Data from the Department of Immigration and Border Protection reveals that 128 children self-harmed in the period from January 2013 to March 31, 2014. These rates are high given there were about 2,000 children in detention at the highest point in July last year. In March, these numbers had reduced to about 900 because many children are being moved offshore or into the Australian community.

At a recent public hearing for the inquiry, the Commission was told by the medical provider to detention centres that the mental health of adults in detention is seriously compromised. According to the Department of Immigration statistics, during the same 15-month period, 89 adults self-harmed. Children are living in extremely close quarters to these very depressed adults.

Professor Elliot said that of greatest concern was the high rate of distress - anxiety, depression and self-harm among otherwise healthy young mothers with young children. Many mothers are depressed after giving birth and suffering health problems related to childbirth and the unhygienic conditions in the camps.

Detention centres generally have very limited space for recreation or for physical exercise. Construction Camp on Christmas Island has almost no open, clean or safe areas for babies to learn to crawl or for children to play. There is one shaded piece of play equipment for small children and an asphalt basketball court within the detention camp. Unfortunately, it is too hot for children to be out in the open until the sun goes down.

Professor Elliot said the physical environment is totally unsuitable. Children suffer from recurrent asthma, and irritation of the eyes and skin is common, reflecting the dirty environment and raising questions about the causal effect of atmospheric phosphate dust from the local mine.

I noticed a distinct deterioration in the children and their families since my previous visit. They are plagued by despair and helplessness at the seemingly endless period of detention.

While I am encouraged that the Department intends to set up a school for children, for the past year, children have had no education or structured physical activity. Parents are asking for their children to be moved to the mainland where they will be safe and have access to medical facilities.

Commission staff met many children suffering with nightmares or flashbacks - children who had developed bed-wetting or stuttering, and who had withdrawn to their rooms or refused to eat. Professor Elliot described the symptoms that she observed as being consistent with post-traumatic stress disorder.

The detention camps are also home to children who have arrived in Australia without parents. These children are commonly described as "unaccompanied minors". Most of these teenagers have fled extreme violence in their home countries and the majority of them come from a situation where a parent or close family member has been murdered, abducted or persecuted.

These children are traumatised by their previous life experiences and they describe a continuation of this trauma in the detention environment. They fear being moved to Nauru or Manus Island and they say they have no future.

One teenager said the detention environment has "taken away my hope" and "my life is over".

A 15-year-old told a Commission staff member: "During nine months no one has asked me 'how are you doing?' You are the first person."

All people in detention are yet to have their claim to refugee status assessed.

These conditions raise concerns that Australia risks serious violation of its fundamental obligations at international law to protect asylum seekers without discrimination and to consider their claims to refugee status expeditiously.

The Commission calls on the Government to consider moving all children and their families to mainland Australia where they can be treated with humanity and their claims to refugee status can be assessed according to law.

Gillian Triggs is the President of the Australian Human Rights Commission.