Events on Manus Island have graphically and tragically brought to the attention of the Australian public the inappropriateness of the current arrangements for the regional processing of asylum seekers.

I have been troubled by the loss of life and the injury that has occurred on Manus Island over this past week, even as we wait for further information about what exactly has occurred. I am also disturbed that this is not the first such incident in immigration detention facilities.

We owe it to the victims of this violence to pause and reflect on how we can prevent recurrences of such tragedies.

There are a range of factors at play that contribute to a volatile environment behind the razor wire that can explode into violence and lawlessness at any stage. It is the cumulative impact of these factors that leads to an unpredictable and dangerous situation coming into being.

These factors have been documented and yet remain unaddressed. The Australian government must act to tackle these long-standing concerns to provide a safe and appropriate environment for asylum seekers. Failure to do so will risk further unrest and harm unfolding. Such harm would be the more disturbing for the fact that it is preventable.

Under international law, the Australian government has a responsibility to ensure that when it transfers people to other countries there are adequate safeguards to protect the rights of people in those countries. To the extent that it is responsible for the detention of those people in those countries, it has an obligation to ensure they are treated humanely and protected from threats to their physical safety.

Second, there must be adequate monitoring of conditions. The difficulty of obtaining accurate information about exactly what has occurred on Manus Island this past week, of what has caused the unrest and who bears responsibility, is also disturbing.

It is a graphic reflection of the lack of transparency and accountability that accompanies offshore processing arrangements. In fact, the memorandum of understanding with the Papua New Guinea government about the Manus Island facility requires that both countries ''treat transferees with dignity and respect and in accordance with relevant human rights standards''. Independent and transparent monitoring is required to ensure that this occurs.

Third, the processing of protection claims must begin. The Australian Human Rights Commission understands that no one on Manus Island has had their claims to asylum assessed. The indefinite nature of detention on Manus Island contributes to a sense of despair and a lack of hope for a better future.

The combination of detention being for prolonged and uncertain periods, with people being removed to remote locations and held in harsh and inappropriate conditions, takes a heavy toll on mental health.

We know much about the devastating effects of prolonged detention on asylum seekers detained on Nauru and Manus Island between 2001 and 2008. Some were diagnosed with a range of mental illnesses, including depression, anxiety, post-traumatic stress disorder, adjustment disorder and acute stress reaction. There were also high levels of actual and threatened self-harm, and heavy use of medication including anti-depressants and anti-anxiety, psychotropic and sleeping medication. The risk of this occurring is so high that no children have been transferred to Manus Island. This speaks volumes about the inappropriateness of these facilities for any individual.

The present arrangements are completely inappropriate - simply ''outsourcing'' Australia's international obligations to other countries. All people who arrive here seeking asylum should have their claims assessed in Australia by the Australian government. We should provide protection to those found to be refugees.

The government has rightly emphasised the importance of preventing the death of asylum seekers at sea. Now it must take steps to ensure that life and safety are equally valued when people are placed in immigration detention facilities, be they in Australia or on Manus Island or Nauru.

If we cannot guarantee that asylum seekers will be treated with dignity and safety where they are housed, then we must find alternative solutions that meet this most basic of requirements.

Gillian Triggs is president of the Australian Human Rights Commission.

Published in The Age and The Sydney Morning Herald
Published URL http://www.smh.com.au/federal-politics/political-opinion/we-cant-outsource-our-… 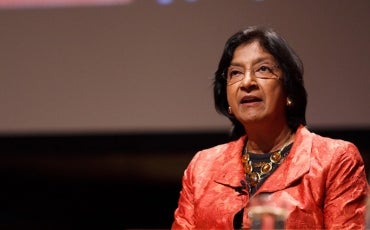