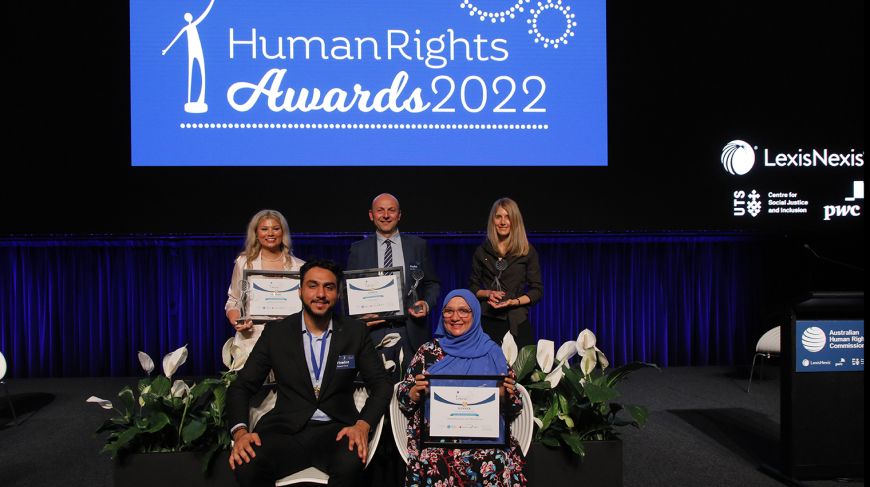 Mahboba Rawi and Nawid Cina received the accolade at a ceremony hosted by the Australian Human Rights Commission Friday, 9 December.

Commission President, Emeritus Professor Rosalind Croucher AM said: “All of the award recipients have done exceptional work in making the world a fairer, safer and more equitable place.

“Mahboba and Nawid have worked with determination to promote the rights of women and children, and to support people fleeing the Taliban in Afghanistan – especially those who are within our communities.”

Mahboba said she was honoured to receive the award alongside her son: “What drives me to do the work that I do is the suffering of Afghan women.

“I dream for Afghan women to be free and choose what they want to do, to go out without permission, to run their life the way they want, to work equally, to study, go for further education.”

Caroline Cecile Fletcher, winner of the Young People’s Award, has used her lived experience of the foster care system to advocate for young people. She made significant contributions to legislative reform in Queensland to ensure that out-of-home care supports will, from 1 July 2023, be extended from 18 years until a young person reaches 21 years of age.

Hotel Etico, winner of the Community Award, is an innovative social enterprise that provides sustainable employment pathways for young people with disability. It aims to transition trainees into open employment and to facilitate independent living.

She called for structural reform and self-determination for First Nations people: “Departments of child protection need to be replaced by empowered community-controlled organisations and true self determination. Child prisons and juvenile detention centres replaced with treatments that respect the humanity and vulnerability of children and strengthen families and communities.”

Since 1987, the Commission’s Human Rights Awards have celebrated the important work of people, businesses and organisations who have advanced human rights in Australia.

The 2022 Awards received one of the highest ever number of nominations, and seventeen finalists chosen across four award categories. The awards were sponsored by event partners, LexisNexis, the UTS Centre for Social Justice and Inclusion, and Price WaterhouseCoopers.