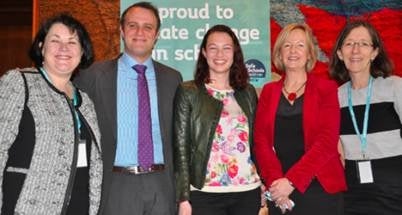 Thank you for the kind introduction.

It is an immense pleasure to launch the national Safe Schools Coalition today.

Recently the nation-wide launch of the Safe Schools Coalition was held in Melbourne. The importance of this project was demonstrated by the bipartisan support it enjoyed at that launch. It was launched by the Coalition’s Parliamentary Secretary for Youth, Senator Scott Ryan, and Labor’s Leader in the Senate, Senator Penny Wong. Equally, while the program was initially funded under the former government, the funding was continued by the Abbott government in its most recent budget.

I don’t have to tell this audience why developing programs to tackle LGBTI bullying in schools matters. The data on the sense of self-worth and security for LGBTI youth speaks for itself.

Based on the University of Western Sydney’s ‘Growing up Queer’ report, young people face homophobic and transphobic harassment in all aspects of their life, from family, to work, in public, at sporting events and at school. Sadly the report surmised that ‘schools were identified as the major site in which homophobia and transphobia prevailed’.[1]

The consequences of not fitting in and feeling ill-at-ease with yourself leads to introspection, developmental growth challenges and a frighteningly high number of LGBTI youth who have considered or engaged in self-harm.

That is why the Safe Schools Coalition is so important. Because behind the statistics and research that shows young people often struggle to come to terms with their sexuality, or gender-identity, we lose sight of where the pain that they experience comes from.

Yes, there are problems of harassment and bullying from their peers. But there is something unique about the issues that LGBTI people experience. What’s perhaps more prevalent with LGBTI people is not just that the bullying comes from others, it also comes from within. It’s not deliberate. People who are struggling with their sexuality or gender identity are often the people who punish themselves the most.

It isn’t the same as being your own harshest critic. Because you are not criticising your actions or behaviour, you are condemning your existence, your often most intimate and private thoughts, and your very self.

Every individual’s experience is different. But as a general theme, if you experience racism or sexism you can ordinarily go to family members, others in your community or friends to talk about the experience you face and find some support.

There are, of course, exceptions to that rule and I am not dismissing the equally heavy burden generated by unjust prejudice such as racism and sexism. These unjust prejudices must be stamped out. But many who struggle with their sexuality or gender face a unique challenge. More often than not, they have no one.

Sexuality is not visibly external. And the people you want support from most to help your with your private pain, your internal struggles and your doubt are often those that you fear telling the most.

So you are left alone. Isolated. Trapped and locked in the dungeon of negative thoughts that swirl within your own mind. Alone and with no one to talk to, or relate too. Young LGBTI people bully themselves.

You also lack role models. Once upon a time there were reference points in the public domain, but they were primarily ‘funny uncles’ and dying AIDS patients on television. The world has gotten slightly better, but the subtitle to even recent public ‘coming outs’ by high profile sport stars and celebrities is that being open about who you are can harm your career and advancement. We need to tackle that perception.

The Safe Schools Coalition is not a silver bullet to address these problems. But it does help build a place, a community, an environment where young people spend much of their day to combat negative external messages and thoughts. Schools should be a place where everyone is filled with positive messages about individual self-worth.

It is important to remember that this is what the Safe Schools Coalition is seeking to achieve.

Young LGBTI youth face unique challenges, but the objective of this program is not to promote special treatment or create a special climate for LGBTI youth in schools. Its objective is to ensure that schools provide a safe environment for all – including LGBTI youth.

The principles behind the Safe Schools Coalition are uniting, not dividing.

The principles are a common aspiration we have for all young people, not just LGBTI students, that a school can provide an open, safe and inviting environment for young people to be comfortable with who they are.

We want young people to be confident in themselves so they can dedicate their energies and talents away from suppressing or hiding an aspect of their identity; and instead direct their energies toward personal growth, learning, civic mindedness, entrepreneurialism and unleashing their maximum potential as an individual to advance their own interests, and that of the general community in the process.

And that is the optimistic message we should be communicating to young LGBTI Australians: that our society values your talents, your skills, your knowledge and your aspiration to reach your individual maximum potential.

Yours is a life of hope and opportunity. We all face adversity at different times in our lives. Adversity can build character and steel resilience. But sometimes it can feel equally crippling.

The message we need to send far-and-wide to all LGBTI youth is that your potential for achievement, success and life satisfaction is always greater than the fears and anxiety caused by doubt.

It is why you will never hear from me discussions about lavender ceilings and rainbow roadblocks for LGBTI Australians seeking their goals in the community, enterprise or reaching the highest offices in the land.

A spirit of optimism must also be instilled in young people at the time of their life when they feel most vulnerable. We all know that schools play an immensely important role during a critical time in young people’s lives – whether straight or gay.

Experiences from school can have a legacy effect that lasts a lifetime. Secondary school, in particular, is a time when young people explore and discover their full individuality that helps shape their understanding of their place in the world.

We know we cannot simply outlaw unjust prejudice. If we could we would have already done so. It is through long-term cultural change that we will create a more pluralistic, tolerant and cohesive society.

As Deena Fidas from the US-based Human Rights Campaign recently said, specifically referencing the ongoing challenges facing LGBTI acceptance in the United States: ‘if we learned anything from the equal rights movement, it’s that legislation and policies are not enough ... there has to be an actual culture of inclusion’.[2]

A culture of inclusion is a long and sometimes seemingly endless road. The Safe Schools Coalition is another significant step on the road toward a more perfect and inclusive Australian society.

I congratulate the organisers, am slightly chuffed that a Victorian program has, again, been adopted by our Northern neighbours and proudly launch the Safe Schools Coalition in New South Wales.