Good afternoon. Firstly, I would like to acknowledge the traditional owners of the land on which we meet – the Ngambri people - and their elders past and present.

Thank you David Fredricks for the introduction. It’s a pleasure for me to be here today.

My Role as Human Rights Commissioner

The role of Human Rights Commissioner differs to many of these portfolios that give specific focus through relevant pieces of Federal legislation.

There is no equivalent legislation directing my position as the Human Rights Commissioner and indeed, my role potentially touches on all areas of the work of other Commissioners.

Since starting as the Commissioner, I have assumed two distinct but complementary roles.

First, I work to instill in public discourse and amongst the wider Australian community a strong culture of rights and responsibilities.

Second, and fitting well within this broader framework, I am assuming responsibility for representing human rights as they relate to sexual orientation, gender identity and intersex status. As Australia’s first openly gay Commissioner, I welcome the opportunity to utilise my public position to advocate for the realisation of human rights in this context.

On this note I am impressed and heartened by the number of attendees here to contribute to, and to learn about the new Sex Discrimination Act amendments anti-discrimination protections. This is evidence of the lead role that the Australian Public Service can take in advancing human rights in this country.

Before I start, a quick note on terminology. I want to acknowledge that the Commission recognises that terminology can have a profound impact on a person’s identity, self-worth and inherent dignity. The use of inclusive and acceptable terminology empowers individuals and enables visibility of important issues.

The Commission supports the right of people to identify their sexual orientation, sex and gender as they choose. Indeed I was heartened to hear of the High Court ruling last week upholding that the Births, Deaths and Marriages Registration Act 1995 (NSW) permits the Registrar to register that a person's sex is "non-specific". This ruling is in line with the findings and recommendations of the Commission’s 2009 Sex Files Report on the legal recognition of sex in documents and government records.

Today I am going to discuss the recent changes to the Sex Discrimination Act 1984 which introduce protections against discrimination on the basis of sexual orientation, gender identity and intersex status in federal law. I will briefly address what these changes mean, in particular for the public service, and the importance of providing inclusive environments free from discrimination for LGBTI employees and service providers to help meet these obligations. Finally I will briefly touch on the Commission’s complaint function as this may be one of the ways employers interact with the Commission.

But first, a little about the Commission’s role in the SDA amendments to provide context for why I am here speaking about the changes.

Under our statutory mandate the Commission has several functions that are relevant to this:

In summary, the Commission is the body that receives complaints under the SDA and is the body charged with providing education to improve awareness, understanding and respect for rights in our community.

The Commission has advocated strongly for these changes over many years. In 2010 the Commission commenced a public consultation to canvas the experiences and views of people who may have been discriminated against on the basis of their sexual orientation, gender identity or because they are intersex.[9]

Participants revealed personal stories of discrimination, vilification and harassment that provided compelling evidence of the need for federal protection. Just before I outline the legal changes in more detail, I want to share some of their stories today. Often we can get lost talking about the mechanics of legal and policy change. But it is through understanding the experiences of discrimination, vilification and harassment that we can really appreciate the importance of discrimination protection for LGBTI people in Australia.

Robert and Matthew alleged they were dismissed from their cleaning job...because they were a gay couple. The couple alleged that their employer regularly brought up the topic of their sexuality in work conversations, reduced their hours, and told them they wouldn’t be given older people’s houses to clean because they would not be acceptable to older people.[10]

In another example a transgender individual described:

I was working in a local retailer when I first began my social transition from female to male. I cut my hair very short, and started using my current name. The general manager of the company sent a photograph of me, and my new name in an email to all the managers in the group. I wasn’t comfortable with this, but he said that the rest of the group needed to know who they were talking to over the phone and email. I had been hired for an assistant manager position, so that made sense. I was horrified a few weeks later when I was told that I was not only being demoted from the position I was hired for, but being made a casual staff member (with no rostered shifts) because I wasn’t ‘fit for full time work’. I protested, and he said: ‘face it, you aren’t the girl we hired’.[11]

Case studies such as these demonstrate that discrimination on the grounds of sexual orientation, gender identity and intersex still exits. These examples give us cause to be vigilant and reflective of our own practices to ensure that we are taking the appropriate steps to not only comply with the law but to proactively support LGBTI people in Australia.

Up until August last year, the law in this area was primarily covered at the state and territory level. The Commission could only accept complaints of discrimination on the basis of ‘sexual preference’ in employment and the matter could not proceed to court.

This brings me to the new protections. I will briefly touch on this now, and Jodie Ball our next speaker will extrapolate on the more technical aspects of the amendments.

In March 2013 the former Attorney-General announced that further consideration was required for the Human Rights and Anti-Discrimination Bill 2012. This was the process that sought to consolidate the five pieces of federal discrimination legislation into one Act. However he announced that he would introduce amendments to the Sex Discrimination Act which would provide protections against discrimination on the basis of sexual orientation, gender identity and intersex status as well as extending coverage to same-sex couples.

Employers and service providers who were already covered by the SDA will now have obligations with respect to the new grounds. These include federal government departments and agencies, private companies, small businesses, incorporated and unincorporated bodies, partnerships and recruitment and employment agencies to name a few.

What does this mean for you?

In general the changes mean that, unless you are a state instrumentality, you will have some new obligations under the SDA. It also means that LGBTI people can now bring relevant complaints to the Commission, although a complaint cannot be made to both a state and the federal body.

Most states and territories have some form of protection against discrimination on the basis of sexual orientation and gender identity.[13] However the SDA Amendment Act introduces more inclusive definitions than the state and territory laws, introduces the new ground of intersex status, and if you’re a federal government employer, you have obligations for the first time.

Importantly, the changes establish a national standard for protection against discrimination on the basis of sexual orientation, gender identity and intersex status. This national standard ensures that LGBTI people are protected by anti-discrimination legislation regardless of their postcode and for employers and service providers this is useful as a consistent standard across jurisdictions.

So, what should you do?

As public servants you should become familiar with the changes to the SDA and review their policies, processes and training to ensure that you do not discriminate against people on the basis of their sexual orientation, gender identity, intersex status or their relationship status.

The policies of your workplace should make it clear that discrimination on these new grounds is unlawful, outline complaint mechanisms and be clear about employees’ rights and responsibilities. These policies should be distributed widely and reviewed regularly.

With respect to the new protections, training, policies and practices should give consideration to whether any employee benefits or entitlements available to staff discriminate on the new grounds.

The Commission has developed a number of information sheets on the new changes. We have also held information workshops specifically for business in Sydney and Melbourne and our staff are currently delivering workshops on the changes in other cities around the country including here today.

The Commission is also developing a web portal providing practical resources to assist employers to support workplace diversity and meet their obligations under discrimination law generally.  The portal will host:

The portal will be:

Engaging in our process

Finally I wanted to take this opportunity to briefly talk about our complaint service, which Jodie will elaborate on, further in a moment.

In some cases, despite best practice policies and practices, individual circumstances occur and complaints can arise.

Since the new protections commenced in August 2013, the Commission has received a small but steady number of phone and email enquiries about gender identity, intersex status, relationship status and sexual orientation. The Commission has also received complaints on these grounds during this time. While the numbers are relatively small, it is new legislation and we expect the numbers to increase.

I would like to finish with this. In the beginning of my presentation I spoke of real people facing real situations of discrimination. While the federal protections in the SDA would enable these individuals to make a complaint, it is the role of employers and service providers such as those in the public service, taking strong, concrete steps to create a safe, supportive and inclusive environment for LGBTI people that will help prevent incidents such as these from happening in the first place. Policies and training will help ensure that individual staff know their obligations, help ensure that LGBTI people know their rights, and help the entire Public Service create a culture that is safe, respectful and supportive of human rights. The protections in the SDA can provide a framework to assist you.

I thank you all for your attendance here today, and I am heartened by the efforts I see today and I encourage you all to continue on this journey. 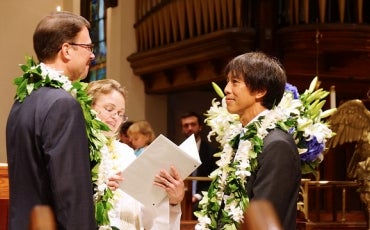 What the law allows: discrimination and the SDA