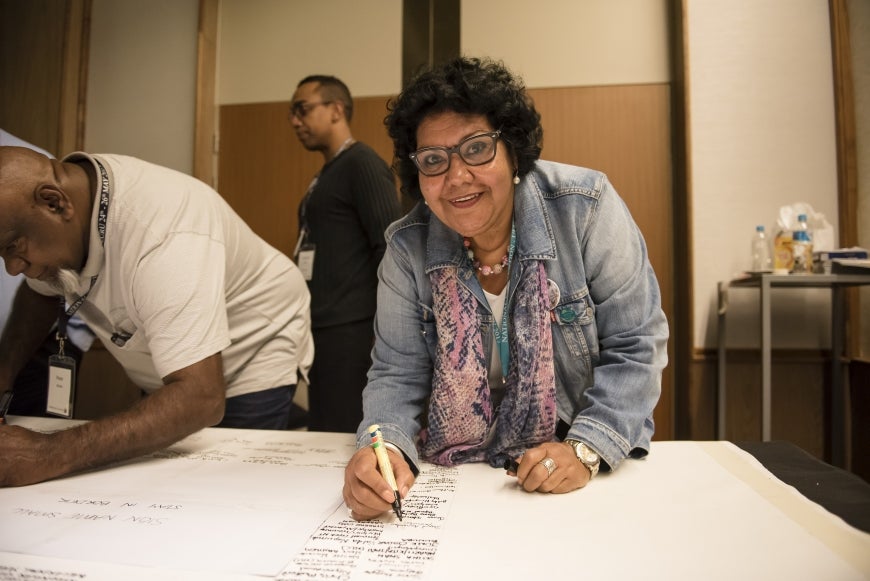 The Aboriginal and Torres Strait Islander Social Justice Commissioner June Oscar AO said she’s encouraged by the growing support among Australians for the Uluru Statement from the Heart.

On the second anniversary of the Uluru Statement, Commissioner Oscar has recalled how she felt, when she took part in the ceremony to present the Statement to all Australians.

“There was a great sense of hope about what this gift could deliver. A new beginning, an opportunity to re-define who we are as a country. A country that celebrates its First Peoples and resets the relationship between all Australians for a better future.

“Despite the recent setbacks and the rejections, I still hold a deep sense of hope, because I genuinely believe that this gift will benefit all Australians. And I believe that Australians are looking for a way to move forward together,” Commissioner Oscar said.

In an opinion piece published today to coincide with the anniversary, Commissioner Oscar said the support for change continues to grow.

“Like the people’s movement in 1967, when Australians voted overwhelmingly to provide the Commonwealth with the power to make laws for Indigenous peoples, there is public appetite for change.

“We must continue to work together with the government to make a First Nations Voice to Parliament a reality,” Commissioner Oscar said.

The Uluru Statement from the Heart came after a national consultation process and called for constitutional reform to set up a First Nations Voice to Parliament.

“A Voice to Parliament is the only way ahead for us. We can no longer be bystanders. When we are forced to watch, rather than be involved, we know the outcomes will never fully address our needs, deliver us opportunities or reflect our hopes. We must be part of the development and implementation of policies and programs that affect our everyday lives.

"To all Australians who have received the Uluru Statement and all it holds with open hearts, this is our time to work together and shape the country that our children and grandchildren will inherit. I know we can do this,” Commissioner Oscar said.