While the role and functions of HREOC as set out in legislation are primarily
directed towards human rights issues within Australia, HREOC undertakes an
international education and training role, with a specific focus on agencies in
the Asia Pacific region.

In 2007-08, as in past years, most of this has taken the form of technical
cooperation programs with other countries. These programs, which are based
around sharing knowledge and expertise, are generally delivered through the
framework of the Australian Government’s development cooperation program
administered by the Australian Agency for Inter-national Development (AusAID).
This international technical cooperation work is externally funded (not from
HREOC’s core budget, which is devoted to fulfilling its domestic
mandate).

These programs, along with HREOC’s participation in other international
fora, such as the Asia Pacific Forum of National Human Rights Institutions, also
provide a valuable way to keep abreast of international developments in human
rights and models of best practice for national human rights institutions.

HREOC’s international role has evolved from the way that it has pursued
its domestic responsibilities. It also reflects the organisation’s belief
that helping to strengthen human rights protection in other countries has
flow-on benefits for everyone, including Australia. The international work also
provides staff development and gives wider international perspectives which
enhance HREOC’s domestic work.

In undertaking these activities, HREOC engages with a variety of institutions
and professionals relevant to the protection and promotion of human rights; for
example, government agencies and civil society groups in other countries, that
are involved in the protection and promotion of human rights and interested in
how the Australian experience could be relevant to their country. The activities
seek to strengthen the capacity of those institutions to protect human rights
through the increased ‘professionalism’ of agencies involved in
enforcing or implementing laws and the rule of law.

Many of HREOC’s international training activities involve a staged
process of implementation, from initial scoping to design through to full
implementation. This reflects the strong emphasis HREOC gives to detailed
planning to ensure that the Australian input accords with the needs and
priorities of overseas partner agencies.

It also reflects the fact that success in this area requires a gradualist
approach, with substantive progress often being preceded by a lengthy process of
establishing relationships and building confidence in the program. Concerted
efforts are also made to ensure that partner agencies feel a sense of ownership
of the program, which is essential to its success and long-term sustainability.

Most of the international training activities undertaken by HREOC centre on
practical issues that affect the lives of individuals, such as domestic
violence, police conduct, prison management, investigation techniques, access to
legal aid and so on. Notwithstanding this practical focus, efforts are made to
ensure that the activities are firmly grounded in human rights principles set
out in international law.

HREOC’s most substantial international program involvement is with the China-Australia Human Rights Technical Cooperation Program (HRTC), which
is an integral part of Australia’s annual inter-governmental Dialogue on
Human Rights with China. HREOC participates in the annual meetings of the
dialogue.

The HRTC program encompasses three principal themes: protection of the rights
of women and children; protection of ethnic minority rights; and reform of the
legal system. The program aims to provide an important information base of human
rights principles, ideas and strategies which can be drawn upon in the
development of Chinese policies and practices. The program includes activities
conducted in both China and Australia. Each activity in the program is
implemented as a cooperative venture between HREOC and particular Chinese
organisations. Some selected examples of activities implemented in the 2007-08
HRTC Program are given below.

HREOC also participates in the Vietnam-Australia Dialogue on International
Organisations and Legal Issues, including Human Rights.

A program of human rights technical cooperation with Vietnam was established
as part of the dialogue and commenced in late 2006. The HRTC program with
Vietnam focuses on four areas: access to justice; dissemination of information
about legal rights and obligations; the rights of women; and raising awareness
of international human rights treaty obligations. HRTC activities implemented in
2007-08 included the following:

The first phase of the HRTC Program was completed in June 2008. In January
2008, HREOC participated in a Program Design Mission to Vietnam, for
consultations with Vietnamese authorities that produced the design of the second
phase of the technical cooperation program. Pending formal approval,
implementation of the program is expected to commence later in 2008. 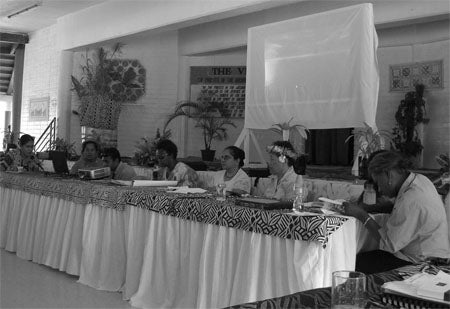 The Asia Pacific Forum of National Human Rights Institutions (APF) was
established in 1996 and its secretariat was hosted by HREOC until the APF became
a separate and incorporated entity in 2002.

the australian Government, through the minister for foreign affairs and
trade, and AusAID has provided financial support for the APF since its
establishment. The APF also receives contributions from its member institutions
and grants from governments, the United Nations, foundations and other
non-government organisations.

The APF is the leading regional human rights organisation in the Asia
Pacific. It is a member-based organisation that supports the establishment and
strengthening of independent human rights institutions in the region. The APF
provides practical support to its members to assist them in their role of
promoting, monitoring and protecting human rights. It also provides specialist
advice to governments and civil society groups. The APF currently has seventeen
member institutions drawn from all parts of the Asia Pacific.

During the reporting period, HREOC hosted the APF’s Twelfth Annual
Meeting in Sydney from 24-27 September 2007. HREOC is the Chair of the APF until
its next annual meeting which will be hosted by the Human Rights Commission of
Malaysia in July 2008.

As Chairperson, the President of HREOC, the Hon. John von Doussa, undertook
several speaking roles on behalf of the APF, including at the 20th session of
the international Coordinating Committee of national institutions held in Geneva
from 14-18 April 2008. In addition Mr von Doussa spoke at the International
Conference on Terrorism, Human Security and Development in Hong Kong on 17
October 2007.

HREOC provides a wide range of support to other national human rights
institutions under the umbrella of the APF. In November 2007 HREOC was
commissioned by the APF to provide two training workshops on human rights
investigations to the staff of the National Human Rights Commission of Korea.
These workshops were held in Seoul, Korea from 5-7 October and 31 October to 2
November 2007.

HREOC participated in a workshop on the review of the role and functions of
the APF’s Advisory Council of Jurists that was hosted by the National
Human Rights Commission of India and held in Delhi, India from 26-28 February
2008.

HREOC has also been working with the APF to provide training to the Pacific
Disability Forum on thematic areas like women with disabilities, the Convention on the Rights of Persons with Disabilities, the Pacific Plan
and the Biwako Millennium Framework, to help build the capacity of national
disability organisations in the Pacific. This training was held in Apia, Samoa
from 23-25 April 2008.

HREOC continues to strongly support the APF and has a Memorandum of
Understanding with its secretariat which provides for accommodation and
corporate services support.

In addition to formal programs of bilateral technical cooperation, HREOC
frequently receives international visitors and participates in meetings with
representatives of organisations concerned with human rights. A summary of these
meetings is given below. 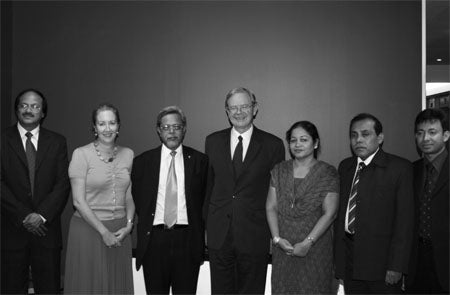 International conferences and meetings HREOC participated in during 2007-08
included: