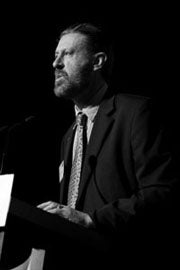 8.1 Statement from the Commissioner

2008-09 has been a year of positive developments in the human rights area. While many human rights challenges lie ahead, as Human Rights Commissioner, I have been excited by the progress that Australia has made in human rights, both domestically and internationally during the year.

It has been especially uplifting to witness the passage through the Australian Parliament of legislation removing discrimination against same-sex couples and their children. Parliament finally passed the Same-Sex Relationships (Equal Treatment in Commonwealth Laws - Superannuation) Act 2008 (Cth) and the omnibus Same-Sex Relationships (Equal Treatment in Commonwealth Laws – General Reform) Act 2008 (Cth) at the end of 2008. This legislation removes discriminatory provisions in a wide range of areas including taxation, social security, employment, Medicare, veteran’s affairs, superannuation, workers compensation and family law. The amendments were the culmination of the recommendations made in the Commission’s 2007 report of the Same-Sex: Same Entitlements Inquiry.On the international front, on 19 May 2009, the Australian Government signed the Optional Protocol to the Convention against Torture and other Cruel, Inhuman or Degrading Treatment or Punishment

(OPCAT). OPCAT is an international agreement which establishes a two-tiered
system of inspections of places of detention, with the aim of preventing torture
and cruel, inhuman or degrading treatment or punishment.

I welcome Australia’s significant step towards establishing greater
oversight and inspection of its places of detention, including immigration
detention, and I look forward to final ratification of the treaty.

There have been many positive developments in immigration detention over the
year, including the budget announcement that Villawood Stage One will be
rebuilt, and the government’s stated commitment to pursuing a more humane
approach to asylum seekers and immigration detainees. However, I am concerned
that the increase in numbers of boat arrivals in 2009 will be seen as an excuse
to politicise refugee issues.

The sex and gender diversity project commenced in 2008. The project was an
opportunity to give voice to the human rights concerns of people who are sex and
gender diverse. In the latter half of 2008, the project utilised a blog to
gather the views of people in a non-confrontational way. The Concluding Paper
from the project - Sex files - concentrated specifically on
the legal recognition of sex in documents and government records. I hope it will
place some of the concerns of this diverse, and often marginalised, group of
communities on the government agenda.

Lastly, the National Human Rights Consultation, announced by the
Attorney-General in December 2008, has made it an especially encouraging year.
Conducted during the first half of 2009 by an independent Committee, the
Consultation has presented a significant opportunity for the Commission and all
people in Australia, to participate in a national conversation on human rights
and how they can be better protected. The Commission dedicated itself to
encouraging others to participate in the Consultation and to advocating for
better human rights protections through a Human Rights Act. As Human Rights
Commissioner, I was especially concerned with ensuring that children and young
people had a voice in the Consultation. With the help of the Foundation for
Young Australians, the Commission conducted a program of 26 workshops with
children, young people and their advocates. Their stories and ideas for better
human rights protections have been presented to the Consultation Committee in
the hope that the final report of the Committee will reflect their views on
human rights.

This is my final annual report as Human Rights Commissioner. I leave the
position with a feeling of optimism and with strong expectations that progress
in the human rights area will be achieved in the years to come.

The Commission made submissions to, and appeared before inquiries into both
of these Bills conducted by the Senate Legal and Constitutional Affairs
Committee, as well as to a related inquiry into the Evidence Amendment Bill
2008.

The Commission also participated in community sector consultations about the
implementation of reforms and raised concerns with the Attorney-General about
the impact of the reforms on people on aged pensions.

Participation in the National Human Rights Consultation was a priority for
the Commission this year.

The Commission decided that the most important role it could play would be to
encourage as many people as possible to participate in the consultation process.
The Commission developed a consultation toolkit, called Let’s talk
about rights, which provided succinct information about human rights and a
guide to making submissions to the Consultation. The toolkit was accompanied by
a series of information sheets about specific human rights issues in Australia. 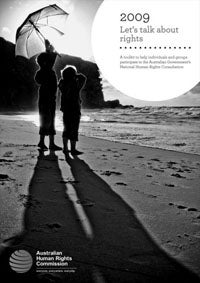 ...............
The Commission developed a toolkit designed to provide guidance to people and
organisations that wished to make a submission to the Australian
Government’s National Human Rights Consultation.

The Commission also developed materials to support the participation of
children and young people in the Consultation.

Commission staff developed and delivered a national series of workshops to
encourage community sector organisations to participate in the Consultation. In
addition, the Commission conducted 26 workshops with children and young people
around the country.

Finally, the Commission made a detailed submission to the Consultation which,
among other things, advocated for a Human Rights Act for Australia. The
Commission also made the following key recommendations to government:

As part of the project, the Human Rights Commissioner conducted public
meetings in Brisbane, Canberra, Hobart, Melbourne, Perth and Sydney. These
public meetings enabled the Commissioner to hear firsthand the difficulties
faced by people who are sex and gender diverse in having their identity
recognised.

On 8 August 2008, the Commission launched an online blog and discussion board
known as Sex files. The Sex files blog aimed to consult further with the sex and
gender diverse community about the legal recognition of sex in official
documents and government records. The Sex files blog was used to gather
information about the current system and seek feedback on how the system could
work better. As the project concerned identity, an online consultation in
cyberspace was an opportunity for participants to self-identify their sex or
gender and escape scrutiny of their bodies and appearance.

In March 2009, the Commission launched the Concluding Paper of the sex and
gender diversity project - Sex files: the legal recognition of sex on
documents and government records - at Parliament House, Canberra. The
paper identifies some problems with the existing systems for recognising sex
identity in documents and government records. It also makes recommendations to
the federal government for changing the system and provides options for
implementing these changes.

8.3 Monitoring
and adhering to human rights

8.3.1 Optional
Protocol to the Convention against Torture and other Cruel, Inhuman or Degrading
Treatment or Punishment

The Australian Government signed the OPCAT on 19 May 2009, but has not yet
ratified the agreement.

The Commission has recommended that the Australian Government should ratify
the OPCAT and establish an independent NPM to conduct regular inspections of all
places of detention, including immigration detention.

In late 2008, the Commission released a report of research it commissioned
into options for implementing the OPCAT in Australia. The report suggests that
Australia should establish a ‘mixed’ NPM model, with separate NPMs
in each state and territory and a national coordinating NPM. The report suggests
that, given its focus on Australia’s international human rights
obligations, the Commission is the appropriate body to be the national
coordinating NPM.

Since 2006, the Commission has conducted annual visits to immigration
detention facilities to monitor conditions for detainees, with the aim of
ensuring they meet internationally recognised human rights standards. In January
2009, the Commission released the 2008 Immigration detention report: summary
of observations following visits to Australia’s immigration detention
facilities. The report provides a summary of visits made to all immigration
detention facilities in Australia, including Christmas Island, between June and
September 2008. In addition to speaking to staff and detainees in secure
facilities during the visit, the Commissioner and staff also spoke to a number
of people in ‘community detention’ in several cities.

The report also reiterated concerns expressed in previous reports about the
dilapidated and prison-like conditions of Stage One section of Villawood
Immigration Detention Centre, and repeated recommendations that it should be
demolished. There are also a number of other detailed recommendations, some
being concerned with issues affecting all detention facilities and others being
specific to individual facilities.

The Commission has also provided comment to the Department of Immigration on
a variety of immigration-related policy documents and in consultative forums.
These have included draft policy guidelines on the behavioural management of
detainees, the exercise of Ministerial discretion and on the Government’s
new directions in immigration detention.

In November 2008, the Commission hosted a seminar entitled, Complementary
protection: meeting Australia’s obligations to people fleeing danger. The Commission subsequently provided comments to the Department of Immigration
about the development of a system of complementary protection for people who do
not fit the definition of refugee under the Refugee Convention, but to whom
Australia has non-refoulement obligations.

In January 2009, the Commission published a background paper on immigration
detention and visa cancellation under section 501 of the Migration Act (the
‘character’ provisions) on its website. This will be updated to
reflect policy changes implemented by the Department of Immigration on 15 June
2009. 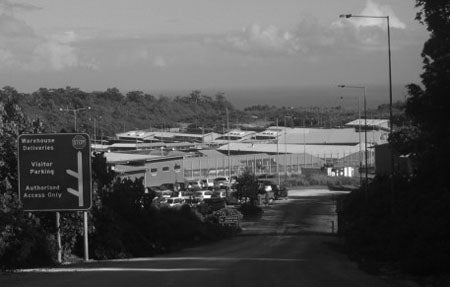 ...............
The Christmas Island Immigration Detention Centre. The Commission has visited
immigration detention facilities each year since 2006 in order to monitor
whether conditions for detainees adhere to internationally recognised human
rights standards.

In 2008-09, the Commission continued its project on corporate social
responsibility by producing fact sheets on integrating human rights into
Australian business practices.

The fact sheets are available on the Commission website and have also been
printed and distributed to a database of about 100 business and human rights
contacts. See: www.humanrights.gov.au/human_rights/corporate_social_responsibility/index.html.

The Commission contributes to legislative development by making written and
oral submissions to parliamentary and other inquiries. Information about these
submissions can be found in Chapter 3: Monitoring Human Rights.

On 5-7 May 2009, the Commission participated in an Asia-Pacific Forum (APF)
Workshop on National Human Rights Institutions (NHRIs) in the Promotion and
Implementation of the Yogyakarta Principles. The workshop was held in
Yogyakarta, Indonesia, and hosted by Komnas HAM, Indonesia’s national
human rights institution.

The workshop brought together member institutions to discuss the role of
NHRIs in promoting implementation of the Yogyakarta Principles on the
implementation of international human rights law in relation to sexual
orientation and gender identity.

The Human Rights Commissioner presented a brief paper on the role of the
Commission in this area.

The workshop issued a concluding comment strongly deploring ‘all forms
of stereotyping, exclusion, stigmatisation, prejudice, intolerance,
discrimination and violence’ against gay, lesbian, bisexual and
transgender people, and made recommendations for further work to be pursued by
NHRIs and the APF in this area.

In addition to the Commission’s workshops on the National Human Rights
Consultation, the Human Rights Commissioner delivered a significant number of
speeches during the year. Full transcripts of the speeches are available on the
Commission website at:
www.humanrights.gov.au/about/media/speeches/human_rights/index.html.

Monitoring the Convention on the Rights of the Child in Australia - International Conference on Child Labour and Child Exploitation, Cairns,
4 August 2008.

Speech about the work of the Commission - Human Rights Defenders
Program, Sydney, 26 November 2008. 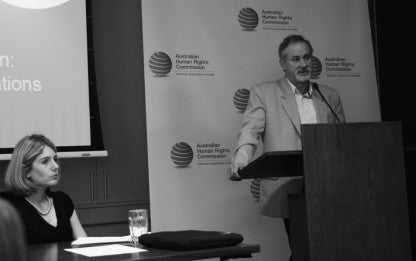 Human Rights of Children and Young People Across Australia -
RMIT Conference, Melbourne, 29 May 2009.